Last year saw a series of brutal mass shootings in affluent white suburbs like Aurora, Colorado, and Newtown, Connecticut. The same year marked a growing divide in violence in urban centers that continue to suffer the majority of fatal gun violence. At the same time that homicides soared in Chicago and Detroit in 2012, they reached decades-long or near-record lows in New York and Washington, D.C.

While gun deaths are related to city size, they do not scale directly with it. Take a look at the scatter-graphs below, by my Martin Prosperity Institute colleague Charlotta Mellander, which plot total gun deaths as well as two types — homicide and suicide — by city population. 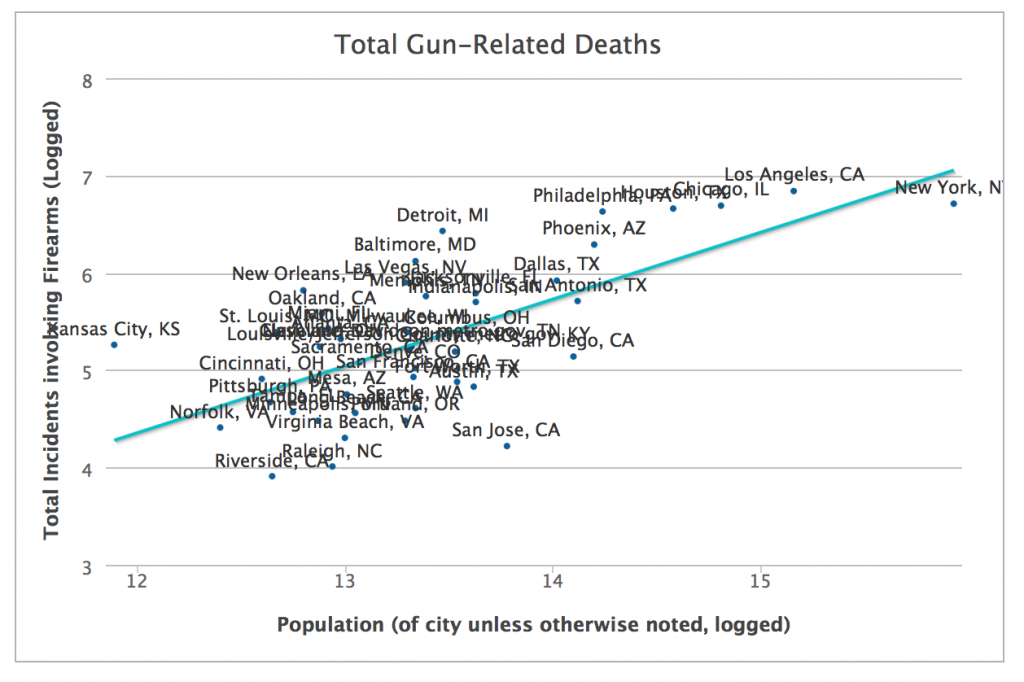 The first is for total gun-related deaths. (While urban crime data suffer from notorious reporting and comparison issues, homicide data is much more consistent and reliable, as Urban Institute crime expert John Roman pointed out on this site because it is “the one type of crime that is really hard to fake: homicide.” As the graph above shows, while total gun deaths increase with city population, the overall association or R2 is .45, which means, as Mellander explains “approximately 45 percent of the number of homicides can be explained by population size.” 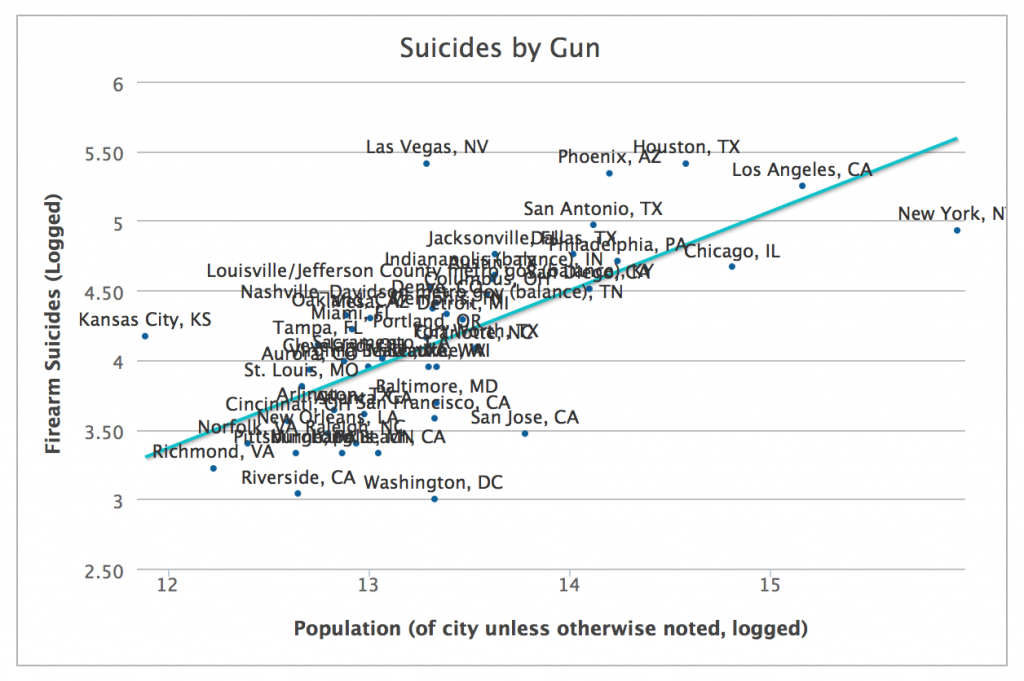 The second is for gun-related suicide. Although suicides by gun again increase alongside city population, the correlation or “R2,” as Mellander explains, “is equal to .46, in other words approximately 45 percent of the number of suicides can be explained by population size.” 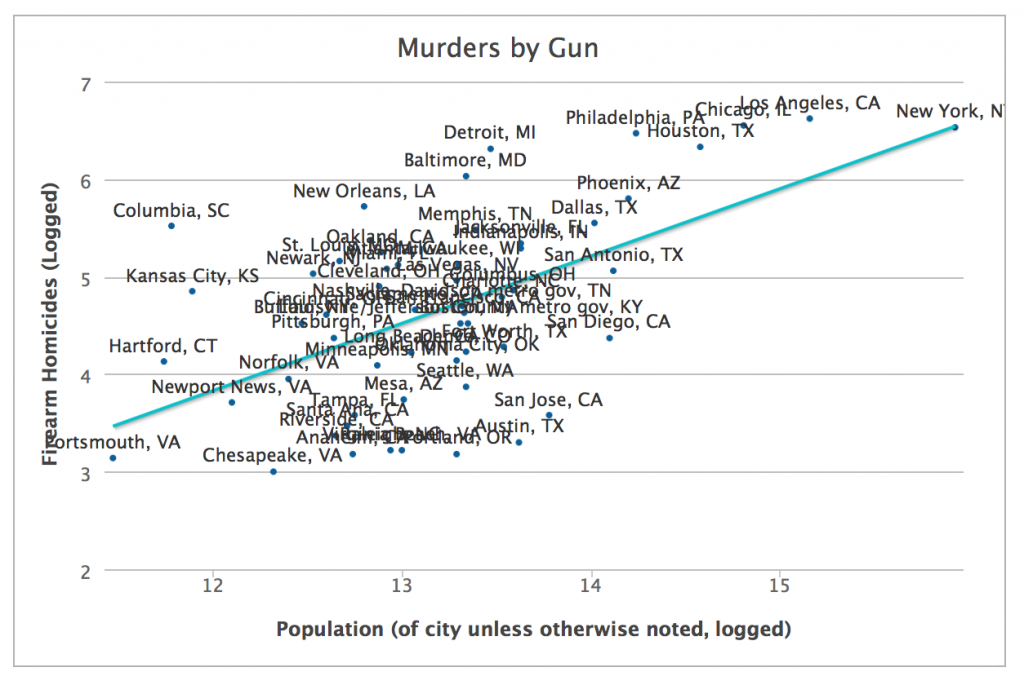 The third chart is for murder by gun, that is, gun-related homicides. Here the relationship to population size is even weaker than for the other two types of gun death, as Mellander explains, “the R2 equal to .32, in other words approximately 30 percent of the number of homicides can be explained by population size.”

The pattern is striking, actually: While nearly half of all gun deaths and suicides can be explained by population size, less than a third of homicides can.

The city-by-city pattern for gun-related murders is also intriguing. New York is right on the line — its rate of murder by gun is in line with its population size. There are quite a number of cities — Chicago, Detroit, New Orleans, Los Angeles, Houston, Phoenix, Philadelphia, Baltimore, Miami, and others — which are far above the line: Murders in these cities are greater than their populations would predict. And then there are those that are below the line — San Francisco, San Diego, San Jose, Austin, and Portland, to name a few. Murders in these cities are quite a bit less than their populations would predict.

When it comes to urban homicide there is not so much a single trend, as Roman has pointed out, but two separate trends. The reason lies in the divergent economic and social fortunes of these two groups of cities. As I noted in my follow-up to Roman’s post, the cities where gun murder is lower are mainly highly educated knowledge-based economies which have experienced considerable urban revitalization as well as substantial immigration that together have “helped to stabilize and bring back disadvantaged neighborhoods and damp down violent crime.”

On the flip side, the inner cities where homicide rates remain higher have seen “far less re-urbanization, have had far lower rates of immigration, and in many cases continue to suffer from the classic ‘hole in the donut’ syndrome.”

Commenting on this last graph, the Harvard sociologist and urban crime expert Robert Sampson noted in an email that many of the cities with high murder rates suffer from devastating inequality, concentrated poverty, and heavily damaged social infrastructures:

The places way above the line for gun murders, like Detroit, Baltimore, Philadelphia, New Orleans, Newark, St. Louis, and Chicago, all have large, very segregated black communities with a history of disinvestment, outmigration, and, except for Chicago, not big immigration in recent decades. With the exception of the South Bronx, New York never had demographic collapse on the same scale. What the Detroit’s and Baltimore’s of American cities also had was extremely high concentrated poverty that mapped onto race.

Murder in these cities is also highly concentrated geographically, as a recent New York Times’‘s story on Chicago’s killing divide illustrates. The detailed map that ran alongside that story documents the stark concentration of murder in the disadvantaged neighborhoods of the city’s south and west sides, noting that: “Residents living near homicides in the last 12 years were much more likely to be black, earn less money and lack a college degree.” The murder rate was much lower in more affluent, professional, and college educated neighborhoods such as Lincoln Park and Hyde Park near The University of Chicago, which saw less than one murder per year.

Sampson’s research on Chicago documents the persistence of these neighborhood effects: He says, “The concentration pattern of murder has been remarkably stable over time, and it might also be worth noting that the same holds true for other indicators of social disadvantage, such as infant mortality, low birth-weight, and so on. The clustering of homicides and poor infant health reinforces ongoing patterns of cumulative disadvantage.” These are places Grist’s Susie Cagle poignantly dubbed “America’s urban sacrifice zones.”

It’s time to come to grips with the ever more concentrated, cumulative, and spiky pattern of disadvantage where poverty, inequality, and violence go hand in hand, far out of the sight-lines of mainstream America. Most of all it’s high time we put an end to the senseless killing caused by guns across all segments of our society.