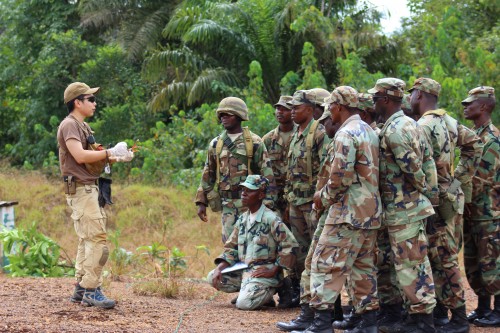 14 years of conflict and civil war have left Liberia with a small but significant problem of explosive remnants of war.  This contamination of the landscape by things like mortars that failed to explode or stockpiles of abandoned munitions left for years in the heat is a potential deadly legacy.

Unexploded ordnance lurking in plantation fields or on the edge of villages pose a constant threat to both civilians and Liberia’s slow but steady reconstruction process.

The UN Mission in Liberia (UNMIL) has previously taken responsibility for the disposal and safe clearance of these dangerous leftovers from the conflict, but with the Liberian government’s increased capabilities to respond to these threats, the UN is looking to move towards handing over this work to the Armed Forces of Liberia.

AOAV has just committed to work on behalf of the UN with the Liberian government to address the issues of explosive remnants of war disposal.

The programme has three main focuses.

First, AOAV will be training the Armed Forces of Liberia in the clearance and disposal of explosive remnants of war. Five AFL teams will be trained up to respond to explosive ordinance threats.

Second, AOAV will be training the Liberian National Police. This training will be in recognising and responding to explosive remnants of war and munitions. Our aim is to familiarise the Liberian police with these items so they understand the need to report immediately any suspicious ordinance to the Armed Forces’ response teams for swift disposal. In order to reach a greater number of police officers, AOAV will be working in a “Train the Trainer” model that will promote the longevity of the training.

Third, and as part of the government’s move away from a UN-led process, AOAV’s training will ensure that the Liberian police will be in charge of a comprehensive national reporting system for the explosive remnants of war.  The intention is that they will be able to inform the Armed Forces about dangerous areas clearance.

The training will begin in early November.