Next week there is to be a major Cluster Munition Convention in Lusaka, Zambia.

More than 100 countries are gathering for the fourth annual meeting of the 2008 Convention on Cluster Munitions to report on progress to eradicate cluster munitions.

The Cluster Munition Coalition, of which AOAV is a member, believes that that every country in the world can and should join this convention; which bans the use, production, stockpiling and transfer of the weapon,  it is a question of political will and of prioritizing the protection of civilians during and after armed  conflict.

One-hundred and twelve states from every region of the world have already joined the Convention, with each ratification and accession strengthening the global stigma against this horrific weapon.

Cluster munitions can be best understood as large bombs that transform into dozens of smaller sub-munitions when dropped through the air. They have been particularly fatal in recent conflicts, including the ongoing Syrian war, where they have contributed to scores of casualties. Much like anti-personnel landmines, cluster munitions have a disproportionate impact on non-combatants living within war zones. As a number of studies and analyses have shown, clusters have little military utility and are not effective in conventional warfare.

However, although international consensus has been achieved in the signing of the treaty, several major powers have opted out of the convention and there have been issues with its ratification.

To this end, from 9 to 13 September 2013 diplomats, political leaders, journalists and charity workers, amongst others, from States Parties, signatory states, observer states, UN agencies, international organisations and civil society will gather to discuss ‘Universalization’ of the treaty.

AOAV is attending.  Partly to support the universalisation of the treaty and partly to deliver two side-events.  One on the legal frameworks that exist relating to assisting the victims of armed violence, and a talk on the impact of explosive weapons on urban areas.

In the run up to the conference, a few killer facts on the impact of both cluster munitions and the convention to ban them:

Status of the 2008 Convention on Cluster Munitions
• A total of 112 states have signed or acceded to the Convention on Cluster Munitions as of 31 July 2013, of which 83 are States Parties legally bound by all of the convention’s provisions.
• Forty-two countries that have used, produced, exported, and/or stockpiled cluster munitions have joined the convention, thereby committing to never engage in those banned activities again.
• Since the convention entered into force on 1 August 2010, becoming binding international law, states can no longer sign, but must instead accede. Four countries have since acceded: Andorra on 9 April 2013, and Grenada, Swaziland, and Trinidad and Tobago in 2011.
• Since August 2012, seven signatories have ratified the convention including two countries where cluster munitions have been used (Chad and Iraq) and one stockpiler (Peru). 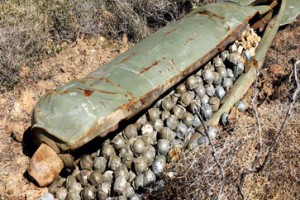 A close call for someone.

Transfer
• At least 15 countries that have in the past transferred more than 50 types of cluster munitions to at least 60 other countries. Six of these states are now States Parties to the Convention on Cluster Munitions.
• At least three states that have not joined the Convention on Cluster Munitions have enacted an export moratorium: Singapore, Slovakia, and the US.
• It is likely that Egyptian and Russian cluster munitions used by Syria were transferred in the past, and not during the current conflict. 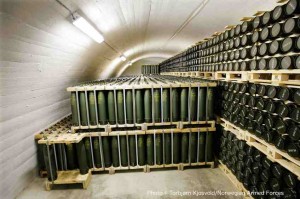 An awful lot of nastiness in one room.

Clearance
• In 2012, more than 59,171 unexploded submunitions were destroyed during clearance of almost 78km2 across 11 states and two other areas.
• Eight contaminated States Parties and signatories conducted clearance of unexploded submunitions in 2012: Afghanistan, BiH, Croatia, the Democratic Republic of the Congo (DRC), Iraq, Lao PDR, Lebanon, and Mauritania. The bulk of clearance was conducted in Lao PDR and Lebanon.
• Non-signatories Cambodia, Serbia, Vietnam, and Yemen also conducted clearance as well as Nagorno-Karabakh and Western Sahara.
• Efforts to improve land release efficiency and productivity are underway through the adoption of amended International Mine Action Standards and the development of new clearance methodologies. These focus increasingly on evidence-based battle area clearance and are better tailored to the particular challenges of cluster munitions contamination.

Victim Assistance
• The Convention on Cluster Munitions has set the highest standards for victim assistance in international humanitarian law; by 2012, even the two non-signatory states with the most cluster munitions victims (Cambodia and Vietnam) had reported their efforts according to its emerging norm.
• With Iraq’s ratification in May 2013, the majority of cluster munition victims now live in States Parties to the convention, which are legally obliged to ensure that these victims are provided with adequate assistance.
• All States Parties with cluster munition victims provided some victim assistance services and nearly all States Parties have acted in accordance with the first time-bound actions of the convention’s victim assistance plan.
• There were measurable improvements in the accessibility of services in many States Parties and most strived to make services sustainable while facing the challenges of reliance on international funding and the poor global economic climate.

International Cooperation and Assistance
• Donor states designate very few of their funded projects as activities related only to cluster munitions. In 2012, the Monitor identified a total of 18 states, as well as the European Union and UNDP, that contributed US$70.2 million in support of activities pertaining to cluster munition clearance, victim assistance, and advocacy in 12 countries and two other areas contaminated with cluster munition remnants.
• All 12 countries and the two other areas receiving funds are also affected by landmines and received funding for mine clearance.
• Lao PDR and Lebanon received a total of $54 million (77%) of the funding identified as relating to cluster munitions in 2012.

National Legislation and Transparency
• A total of 22 States Parties have enacted national legislation to implement the convention, including Australia, Guatemala, Hungary, Samoa, Sweden, and Switzerland in 2012, and Liechtenstein in the first half of 2013.
• At least 33 States Parties and signatories are in the process of drafting, considering, or adopting national legislation. At least 19 States Parties have indicated that they view their existing laws as sufficient to implement the convention.
• Australia’s implementing legislation has been strongly criticized by the Cluster Munition Coalition (CMC) and others for its weak provisions permitting transit and foreign stockpiling of cluster munitions, as well allowing Australian forces to assist non-signatories in the use of cluster munitions.
• Signatory Canada is in the process of passing its implementation legislation. The draft legislation has been strongly criticized by the CMC and others for its problematic language on interoperability and use.
• A total of 58 States Parties have submitted an initial transparency measures report as required by Article 7 of the convention, which represents 70% of States Parties.

Assistance with Prohibited Acts
• There are some divergent views on the ban on assisting with prohibited acts, especially during joint military operations with states not party that may still use cluster munitions (“interoperability”). At least 39 States Parties and signatories to the convention have expressed a view that, even during joint operations, any intentional or deliberate assistance with banned acts is prohibited.
• States Parties Australia, Japan, the Netherlands, and the UK have indicated support for the contrary view that the Article 1 prohibition on assistance with prohibited acts may be overridden by the interoperability provisions contained in Article 21.
• Signatory Canada is considering draft implementation legislation containing extensive provisions on interoperability that the CMC believes run counter to the letter and spirit of the convention.