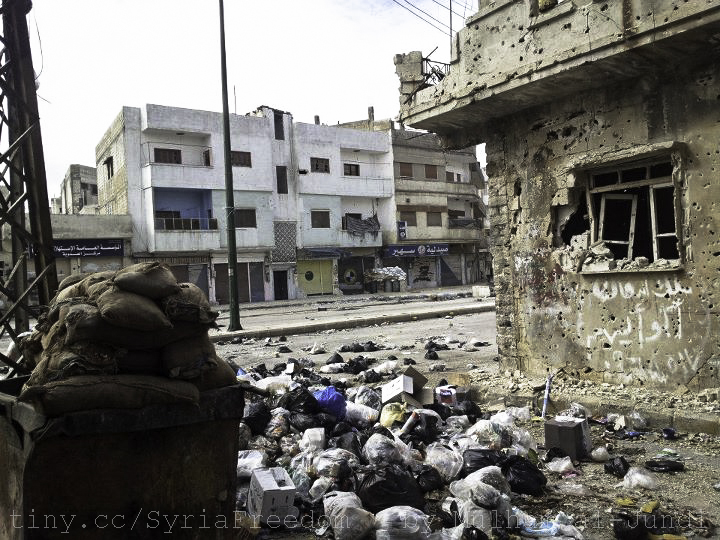 Disturbing reports have been developing throughout today of a series of chemical weapon attacks on the outskirts of Damascus. These reports claim that Syrian government forces fired rockets with as-yet unidentified toxic agents at the Ghouta region, a rebel stronghold outside Damascus, early this morning. The reported number of deaths varies vastly. Some news agencies are reporting a death toll of around 40, while others claim that over 650 people have been killed. Al-Arabiya is currently quoting a figure of over 1,300 deaths.

These hugely different figures demonstrate the lack of clarity around the attacks and their precise nature, but there appears to be a high level of certainty that chemical agents have been used. A number of videos have been released which show dead and injured people with symptoms characteristic of a chemical attack. These videos have not been independently verified, but experts say that the footage being seen would be “very difficult to stage manage“. In the footage, none of the dead or injured have visible injuries, and many are ‘struggling to breathe or suffering from respiratory problems.’ Other videos show people foaming at the mouth. The Syrian Revolution General Commission has reported that the injured demonstrated symptoms such as nausea, hallucinations, suffocation, coughing, high blood pressure and seizures. All are indicative of chemical weapons use.  Jean Pascal Zanders, a chemical weapons expert, has been sceptical of previous claims of such weapon use in Syria, but states that in this case “it is clear that something terrible has happened“.

The attacks occurred just days after a UN team entered Syria in order to investigate earlier alleged uses of chemical weapons. There have been calls for the team to visit the site of this morning’s attack, but it is unclear whether they have the mandate or authorisation to do so. The team was only permitted to enter Syria with the explicit agreement of the government, and it is unknown whether President Bashar al-Assad’s regime will grant them access to the area of the attacks. State-run media outlets have denied the allegations, calling them “baseless“, and claiming that they are an attempt to distract the UN inspectors. What is unclear is why such attacks would be launched by the government while the inspectors are present in Syria. The international community has voiced its surprise at this timing, but the attacks are primarily being reported as being carried out by government forces.

What is clear is that if the allegations are confirmed, we have just witnessed a very worrying development in the Syrian civil war. While chemical weapons have allegedly been used before, the number of casualties in this attack seems much higher than in any previous incident. If the ultimate death toll approaches the current highest reports, it would represent a huge escalation in the conflict.

AOAV condemns the use of all and any chemical weapons in Syria. The use and stockpiling of chemical weapons was outlawed in the Chemical Weapons Convention of 1993, a nearly universally-accepted and vastly important treaty which only Syria and a few other states are not party to. Indeed, the Syrian government has confirmed its possession of these weapons.  The scenes being shown in the many videos which have emerged today should never be seen again. We hope that the international outrage following today’s tragic events, and the results of the on-going UN investigative mission, will convince all parties to the conflict to ensure that chemical weapons are not used again.