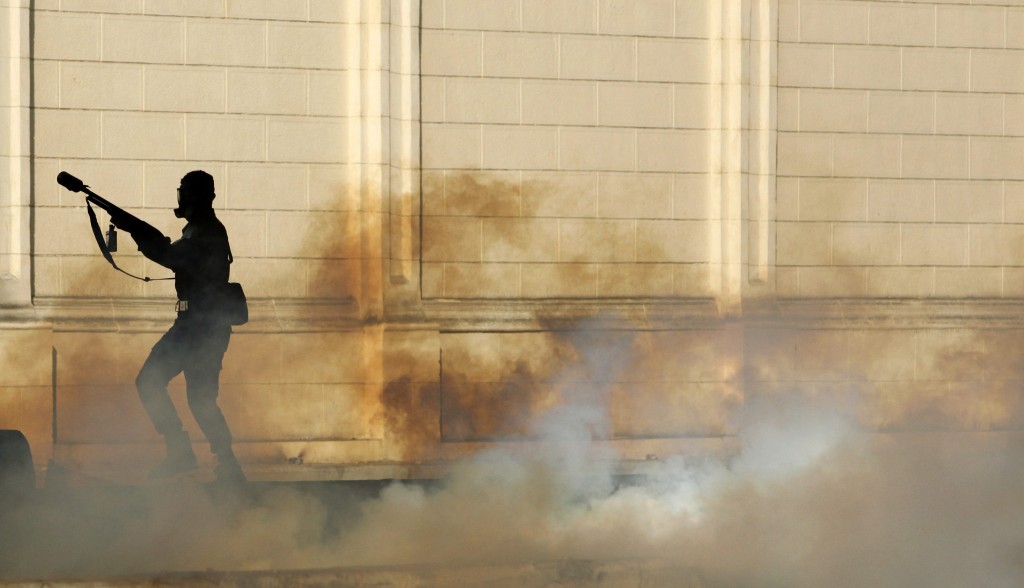 The world watched in horror yesterday as the Egyptian military violently attacked supporters of ousted president Mohamed Morsi who were occupying points in Cairo and elsewhere in Egypt. While the day’s death toll is still unclear, it is at least 525 at latest count and still rising. AOAV unequivocally condemns the Egyptian Army’s tactics, particularly its use of battlefield equipment for domestic security purposes and its apparent willingness to use live ammunition indiscriminately in densely populated urban areas.

“When extreme violence is use to quell demonstrations, it breeds resentment that will last for a lifetime. Brutal methods that bring temporary order serve to shatter trust and any hope of a lasting peace,” said Steve Smith, Chief Executive of AOAV.

A few issues deserve to be highlighted here. Since 1980, Egypt has been a major recipient of military aid from the West, especially the United States. The Egyptian military relies to an enormous amount on US-produced or US-designed and licensed equipment, provided via a $1.3 billion/year aid programme with a heavy emphasis on military supplies. American weapons – M1A1 and M60A3 Main Battle Tanks, M113 Armoured Personnel Carriers, armoured Caterpillar bulldozers, and AH-64 Apache attack helicopters have all been extremely visible throughout the recent Egyptian civil unrest. The United States has refused to characterise the ousting of President Morsi by the military as a coup, and in doing so has sidestepped the obligation to suspend its military aid programmes. In fact, the only public change the US has made thus far has been delaying the delivery of four F-16 fighter jets – a half-measure at best, given that such planes are completely irrelevant to the type of violence seen yesterday.

But the US is not alone in supplying the Egyptian Army. The total value of the UK’s arms export licences to Egypt have been estimated at £20 million from early 2011 to the end of 2012, including assault rifles, machine guns, military communications equipment, acoustic equipment for riot control and other items relevant to the violent suppression of civil unrest. Other EU nations have also sold Egypt a wide range of military hardware, with total values in the hundreds of millions of Euros. The revocation last month of certain arms exports to Egypt by Business Secretary Vince Cable is worthy of praise, but broader and more determined action is needed to stem the tide of weapons being used by security forces to kill and maim Egyptian civilians in the streets of their own country.

It is also worth observing that Egypt has not signed the Chemical Weapons Convention, which bans the use of riot agents in warfare.  Given the government’s own statements to the effect that it is combating terrorism, this seems like a relevant consideration. Sadly, yesterday’s protest resignation of former UN arms control official Mohamed ElBaradei as Vice President makes the prospect of Egypt’s accession to this vital international instrument even less likely.

Sadly, this violence represents a broader pattern of behaviour for the Egyptian security forces, which have employed indiscriminate violence against protestors repeatedly in the last two years. Moreover, the military has not served as an impartial arbiter of the post-Mubarak political transition: they have taken an active and frequently aggressive role in defending their own political and economic interests. Rather than serving to promote regional stability, continuing to arm the military serves primarily to solidify its position at the centre of Egypt’s power structure while tacitly supporting its inhumane tactics.

The situation in Egypt underlines the importance of better transparency and accountability in international arms exports. AOAV calls the international community to condemn yesterday’s atrocities, and to continue working towards a more open, transparent and accountable international arms control system. Ratifying and enacting the recently-passed UN Arms Trade Treaty would be a good start, as it sets out a framework for limiting the sale of deadly arms to states which abuse their power and threaten the lives of civilians.

“Those members of the Egyptian armed forces who have participated in killing hundreds of largely unarmed civilians should hang their heads in shame. And any state that believes it’s right to continue fuelling such behaviour must think twice about its own moral compass,” concludes AOAV’s Steve Smith.

Update (17:40 GMT): The United States has announced that it will not hold joint military exercises scheduled for next month. Meanwhile, roughly 200 additional charred bodies have been discovered in a Cairo mosque, which have not yet been added to the official death toll.