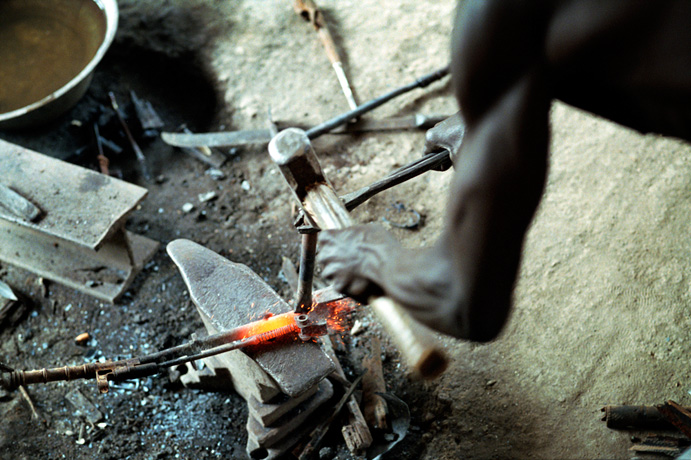 The barrel of an AK47 assault rifle is stripped of it’s fittings by the skilled hand of a blacksmith in Sennehu, a small village on the road to Bo. (© Dominick Tyler)

Worldwide, firearms contribute towards approximately 60% of all violent deaths in non-conflict settings. In Sierra Leone, more than ten years after the end of the country’s brutal civil war, firearm ownership is relatively limited.  Yet when guns are fired, the impact is often deadly. 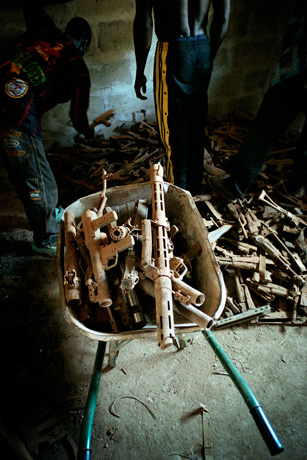 Blacksmiths collect scrapped weapons from a small stockpile outside the southern city of Bo. (© Dominick Tyler)

A national survey on armed violence in Sierra Leone, produced by AOAV and the Sierra Leone Action Network on Small Arms (SLANSA)
in 2013, found that victims of firearms are three times more likely to die than those attacked with other weapons, such as machetes, knives, and blunt force weapons such as clubs and rocks. In a country with limited medical facilities and poor transport links, gunshot injuries often result in death or disability.  The psychological impact of armed violence is often devastating, crippling victims and their families economically and socially.

Working in partnership with the Sierra Leone Government and civil society, AOAV is helping Sierra Leone improve its control over small arms and light weapons and reduce their illegal proliferation.  These efforts include a specific initiative to tackle the problem of illicit gun manufacturers.

Sierra Leone has a thriving underground industry in the illicit manufacture of Small Arms and Light Weapons (SALW).  Constructed with little to no modern machinery, these locally produced weapons are typically made with a cast iron barrel, aluminium firing mechanism, and a rough wooden handle.

These locally produced weapons, though unconventional in design and relatively unsophisticated, can still maim and kill.  More critically, they are unmarked, unregistered, completely untraceable by authorities, widely available, and cheap.  They are increasingly being traded across borders into Guinea and Liberia, undermining these countries’ efforts at small arms control and risking regional de-stabilization. 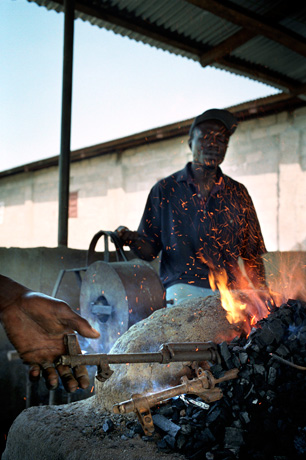 A traditional charcoal forge glows red-hot as two AK47 barrels are heated in the first stage of their transformation into low-tech tools for rural farmers. (© Dominick Tyler)

AOAV is currently studying the scope and nature of illicit firearms manufacturing in Sierra Leone.  AOAV and its Sierra Leone partners recently conducted a survey of nearly 1,400 local blacksmiths, adding each to a newly created national registry.  This number represents approximately 90% of the total number of estimated blacksmiths in the country.

AOAV is now analysing how many of these blacksmiths are actively involved in manufacturing illicit weapons, a task made more difficult by the lack of a general amnesty for unlicensed gun manufacturers.  AOAV is collaborating with the Sierra Leone National Commission on Small Arms (SLeNCSA) to develop provisions for an amnesty and to inform government officials and national legislators on the importance of an amnesty for ending illegal arms production.  With an amnesty in place, the likelihood of productively engaging illicit arms manufacturers would increase dramatically.

Illicit gun manufacturers either need a pathway to legal registration or assistance in pursuing alternative and legal livelihoods.  AOAV has recently conducted a technical assessment survey in which the skill level of local blacksmiths was analysed.

The results of the technical assessment demonstrated that a high percentage (87%) of the blacksmiths have significant experience in metalworking.  However, most would need significant capacity building in metallurgy and light manufacturing – in addition to vastly improved workshops and more sophisticated tools – in order to produce arms of exportable quality.

As a result of these findings, AOAV and its partner SLANSA have been conducting a labour market study to determine what alternative livelihoods may be available to illicit arms manufacturers in the event they are not able to or interested in registering as licensed gunsmiths.  Initial findings have indicated about thirty different items as viable options for production and sale, including farming tools, agro- processing machines, domestic items and construction/ building materials.

Over the length of this project, AOAV will help lead blacksmiths interested in becoming licensed gun manufacturers towards official registration.  This will enable them to produce higher quality, traceable weapons as per government standards.  AOAV will also support those interested in pursuing alternative opportunities in making a successful transition to legal, sustainable livelihoods.  The end result:  a significant reduction in the number of illicit and unlicensed guns in Sierra Leone, and an overall decrease in gun violence and death.