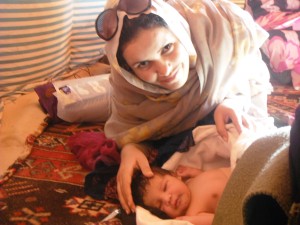 On 7 December, a local woman Fatma, came to AOAV’s field base in Western Sahara seeking medical assistance. Fatma was in the early stages of labour and experiencing severe pain and needed urgent medical assistance. Fatma and her family live in the remote dessert and due to recent flash floods from the rains, she could not get to a hospital. AOAV’s medical team examined Fatma and transported her on one of its specially-equipped ambulances to the nearest facility. On the way to the hospital, Fatma gave birth to a baby boy. On seeing the baby was not breathing, Mul’la resuscitated him and he soon gained consciousness. Three days on, both mother and baby are doing well. The boy has not yet been named as it is traditional in Western Sahara to name a child seven days after the birth.

More accustomed to caring for victims of explosions, AOAV medic Mul’la Buzeid Bobih and the team responded with the utmost professionalism and provided excellent care for Fatma and her child. ‘I will not forget it in a hurry’, Mul’la said after the event, ‘as I have never delivered a baby before!’

For over seven years, AOAV has been conducting humanitarian survey and clearance of dangerous landmines and explosive remnants of war in Western Sahara. Its medics are highly trained and provide 24/7 rapid medical response in case of mine accidents, 365 days a year. AOAV’s medical staff are a lifeline to communities in the harsh, desert environment. In addition to round-the-clock, emergency response for mine-related incidents, and healthcare for its demining staff, AOAV provides assistance in emergency cases to members of the local community. In June 2013, the medical team saved the life of a man who was bitten by a horned viper, one of the world’s most venomous snakes.

In medical emergencies, AOAV coordinates closely with the United Nations Mission for a Referendum in Western Sahara (MINURSO) and the MINURSO Mine Action Centre (MACC) which provide vital emergency evacuation support with helicopters to transport critical cases to the main hospital. In 2013, AOAV has provided lifesaving treatment to 7 victims of landmines and cluster munitions in Western Sahara with MINURSO support.