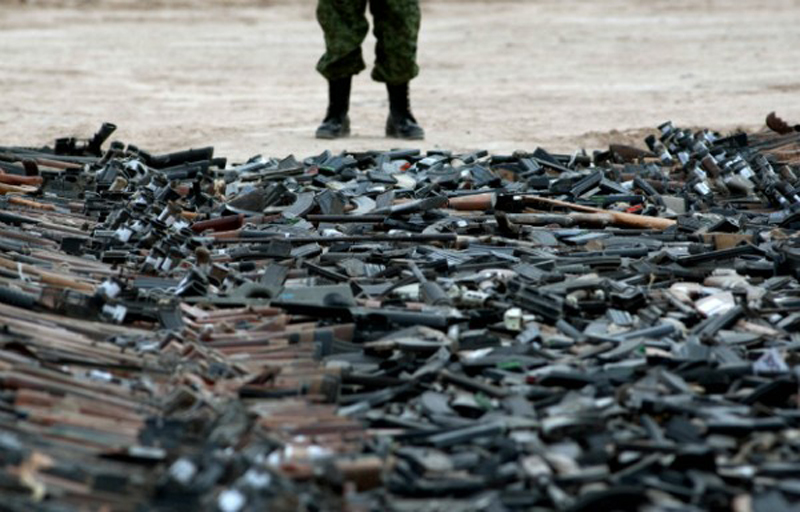 The outstanding success of Argentina’s National Programme for the Voluntary Surrender of Firearms was today recognised with a Silver Future Policy Award by the World Future Council.

The World Future Council cites the Asociación Para Politicas Publicas (APP), a long term partner of AOAV in Argentina and member of SEHLAC, as the key civil society organisation that has helped establish and implement this programme. In collaboration with the APP, AOAV works on a template to support countries in developing national reports on armed violence, and carries out joint research on victimization in Latin America and access to justice for victims of armed violence.

The National Programme for the Voluntary Surrender of Firearms was started in 2006 with the aim of reducing violence through providing economic incentives for the voluntary surrender of guns and ammunition and then destroying them. Effective collaboration between Argentina’s National Arms Registry (RENAR) and the civil society Argentine Disarmament Network (RAD) in the design of the programme has led to the impressive destruction of over 149,000 firearms and one million ammunition units.

Mobile reception points have allowed the programme to visit towns and cities all over Argentina not only to destroy the firearms but also to educate the public at large on the risks of having a weapon and to promote a culture of peace. In order to include all of society in this effort, children were encouraged to exchange their toy weapons for toys of peace. The policy’s recognition of the role of women and children, as well as its development of an anonymous payment method, contributed to the win of the prestigious Award.

María Pía Devoto, Director of Asociación Para Politicas Publicas (APP), a member of RAD, welcomed the news of the win: “This Award is a strong incentive and a unavoidable invitation for civil society to continue the hard work on disarmament.”

Diego Fleitas, Director of APP, who was personally deeply involved in the creation and implementation of the policy, also highlighted the role of civil society: “Civil society had a crucial part in every step of this policy. Civil society organizations together with victims’ families through studies, networking, advocacy, and media actions were able to set the agenda to push the government to adopt the program.”

Matthias Molle, Director of RENAR, added: “The Future Policy Gold Award is both a recognition of the political decision of former President Nestor Kirchner who supported the implementation of the policy, as of the thousands of citizens who acted on their belief that a world without weapons is a safer world.”

The Award’s recognition of Argentina’s policy will hopefully serve as an inspiration to other nations, grappling with similar issues.

The Gold Award was granted to the famous “Treaty of Tlatelolco” (1967) for its invaluable contribution to advancing regional peace and security in Latin America and the Caribbean as well as creating a precedent and inspiration for subsequent Nuclear-Weapon-Free Zones. A second Silver Award went to New Zealand’s “Nuclear Free Zone, Arms Control, And Disarmament Act”. Four additional disarmament policies from Belgium, Costa Rica, Mongolia and Mozambique/South Africa were recognised as Honourable Mentions.

The Future Policy Award is the only award that honours policies rather than people on an international level. The World Future Council convened this year’s Award in partnership with the UN Office for Disarmament Affairs (UNODA) and the Inter-Parliamentary Union (IPU).