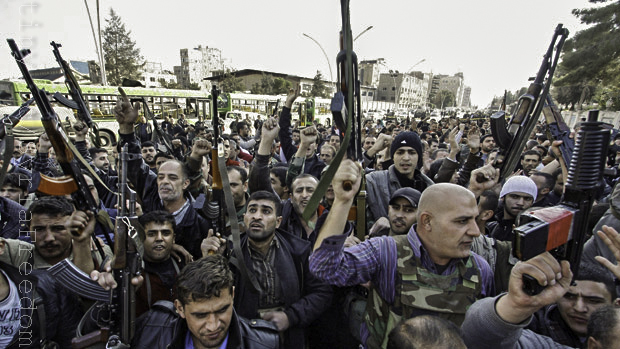 “All weapons find a new home”- where would Britain’s weapons go?

Earlier this week there was a vote by British MPs that prevented the government from sending weapons to Syrian rebels without the consent of Parliament.  Such a vote raises huge questions not only for the nature of British intervention in this conflict, but also for future ones.

Since Britain and France successfully lobbied to drop the EU’s arms embargo to Syria in June it has seemed increasingly likely that European governments would soon be arming the rebels there.  It is AOAV’s position that such actions would both fuel the violence in Syria and contribute to the availability of arms in the region to extremist groups.

The vote on Thursday, which was passed by 114 votes to 1, means that the UK will not be able to follow the American example of arming rebel forces in Syria without seeking the approval of the 650 democratically-elected Westminster representatives.

There was a lot of talk in the debate itself that this vote was a line in the sand in terms of Parliament’s authority, but is it? Where does this vote leave the UK government? And has this vote set a precedent for future arms transfers?

Arming Syrian rebels
In a way, not much has changed. Facing pressure from MPs from all parties the Prime Minister and Foreign Secretary had already made clear, public commitments that no decision would be made without coming before Parliament.

With Parliament about to go on a long summer recess there was still a huge concern that the Government, citing military necessity, could reverse their position and put the wheels in motion whilst MPs had their backs turned.

“We do not want to be brought back here in August when the Government have arranged large shipments of arms to go to the Syrian opposition, which will all be stacked up at Stansted airport ready to go, and we will be asked to approve it. We want a serious decision well before any such action is even contemplated by the Government,” said Jeremy Corbyn MP

This vote has confirmed Parliament’s sovereignty on the issue and has bound the British government to a process before it acts. It also means that it is highly unlikely that the UK will now send arms to Syria, such is the strength of opposition among MPs to the idea, on various humanitarian, political, and ethical grounds.

Conservative MP Jon Barron began the debate by saying: “If humanitarian concerns are uppermost in people’s minds, which I do not doubt for a moment, it beggars belief that anyone could suggest that pouring more arms into the conflict would not add to the violence and suffering.”

His voice was one of many in the House. While external intervention in the Syrian conflict is escalating, the UK looks unlikely to be such a large part of it now.

A question of precedents
The ghosts of Iraq weighed heavy over the room. Parliament was given a vote on the merits of intervention in both Iraq and Libya, but in both cases it was felt by many that MPs were reduced to rubber-stamping an ongoing intervention and that the vote came too late to have any real impact.

In many ways the vote over Syria was to counter this sense of helplessness.  In fact, many MPs stressed on the floor of the House the huge constitutional significance of the vote itself.

Importantly, the proposal to arm non-state actors was described as unique, and one that could open up a Pandora’s box of issues.

MP Mike Gapes, for instance, raise concerns about supplying weapons to a state now controlled by many different actors.  This would set a brand new precedent for the British Parliament in itself.

The idea of supplying arms to non-state actors raises huge concerns about how these weapons would be used, and how they could be controlled in future.

The example of France air-dropping rockets and missiles to Libyan rebels in 2011 demonstrates the risk of proliferation. MI6 has recently said there are more weapons in Libya than in the entire stockpile of the British army, and that most of these are unsecured.  Arms supplied to Libya also found their way to Mali rebels.

As Professor Michael Clarke, of the Foreign Affairs Select Committee, has said: “There is a lot of evidence that Libyan weapons are now circulating pretty freely in the Levant […] Weapons never go out of Commission; they just go somewhere else. Almost all weapons find a new home once a war is over.”

The reality that weapons sent to back a ‘friendly’ rebel force have ended up being used in ways for which they were not intended should weigh heavy on parliamentarians.

It also raises the question: why doesn’t Parliament vote on all transfers on lethal arms?

It arguably should play a greater role in monitoring and sanctioning arms transfers, especially now that the UK is a signatory to the Arms Trade Treaty.

The Treaty will bind the UK to establish the highest possible standards for regulating the trade in weapons. Instead of the oversight of specific committees, why shouldn’t the whole of Parliament be an additional check for every trade of deadly weapons?

The vote yesterday has clear repercussions for British intervention in the Syrian conflict, but it also raises important questions for the accountability of Britain’s arms trade, and Parliamentarians would do well to pursue them.