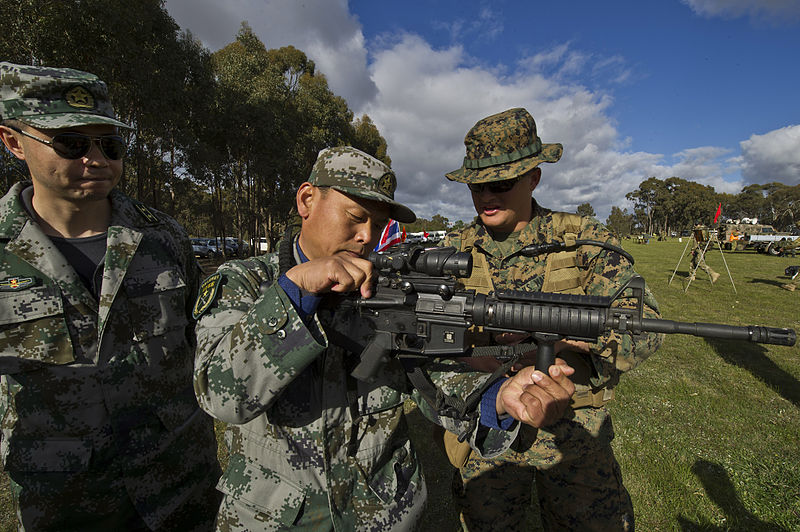 “This is the biggest explosion in trade the world has ever seen.”

As Western Europe’s share in the global arms market sees a sharp fall, Asia is finding itself in the midst of a tight arms race.

In a new study – Balance of Trade – analysts of IHS Jane’s predict that the Asia Pacific defence budget will see a rise of 35% by 2021. This new total of $501 billion (£328.5 billion) would outstrip the US and Canada’s budgets in less than 10 years.

“This is the biggest explosion in trade the world has ever seen.”

According to the report, China’s exports have doubled in the last four years. And South Korea’s race for innovation has also paid off: a massive increase of 688% to $753 million secured them a place in the top 20 the global league of arms suppliers.

“The opportunities in the East are a double edged sword, fuelling a trend which threatens US dominance of defence,” said Guy Anderson, Senior Principal Analyst at IHS Jane’s.

“Low end defence equipment dominates the global market now but the West’s edge on technology will erode this decade as Asia outspends the USA and Europe.”

To the detriment of the estimated 526,000 people dying a violent death every year, the global arms trade has weathered the economic downturn. It increased its worth by 30% since 2008 and now values global imports and exports of weapons at $73.5 billion.

With $28.5 billion worth of arms exports in 2012, the US remains the world’s biggest weapons exporter and homed in a massive increase of 42.1% since 2008. Most of their sales came from Iraq, Afghanistan and the export of military aircrafts.

But the US is kept on its toes. Israel, ranked sixth globally, is predicted to become the largest exporter of drones by the end of 2013. The country is forecasted to sell twice as many UAVs as the US by 2014.

“The global arms market is about to get very turbulent. We may already have reached ‘peak defence’ with the US dominance of the global defence market under threat. The big Western defence companies have no option – export or shrink – but this could be sowing the seed of their own demise,” said Anderson.

The end result of this rather grim prediction of an Eastern arms race? Arms dealers will get richer, weapons will likely increase in circulation and more people are likely to be killed. Not a pleasant thought.