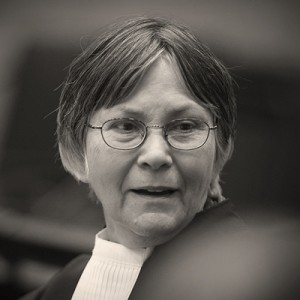 Brenda Hollis
Prosecutor for the Special Court for Sierra Leone

Brenda Hollis is Prosecutor for the Special Court for Sierra Leone, a court set up jointly between the UN and the Government of Sierra Leone to prosecute those most responsible for crimes committed during the civil war. In 2012 Charles Taylor became the first Head of State to be convicted for his part in war crimes. The tribune is also notable for the role of the Government of Sierra Leone, who specifically asked the UN for help in trying those responsible.