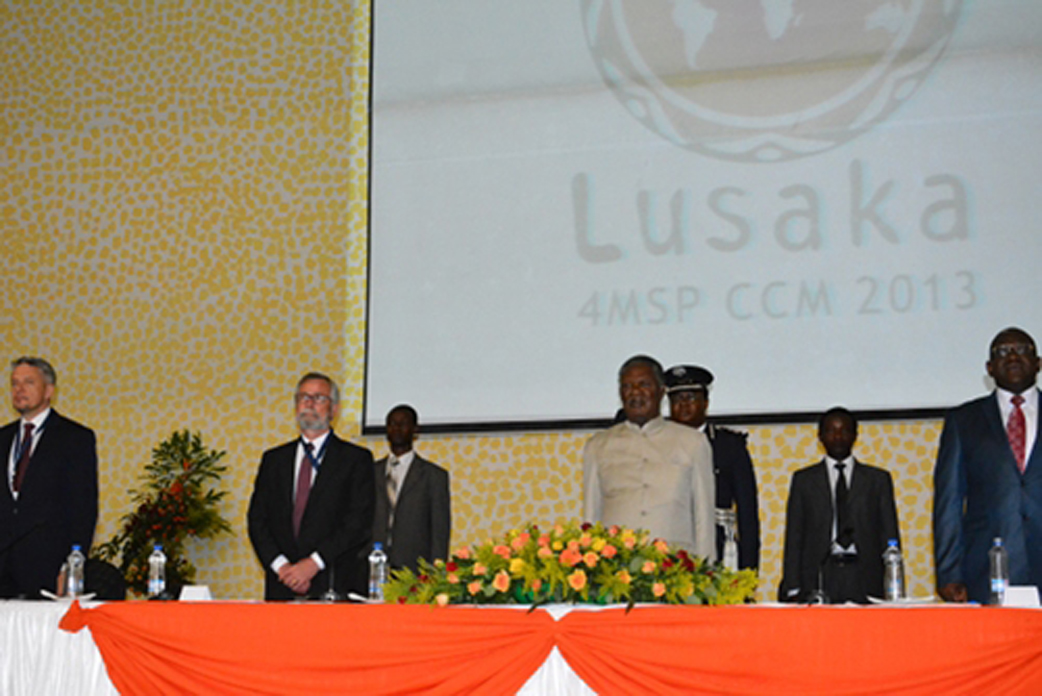 The more than 100 governments attending the Fourth Meeting of States Parties to the Convention on Cluster Munitions this week should strongly condemn Syria’s use of the weapon, said the Cluster Munition Coalition as the meeting opened today in Lusaka, Zambia.

Syrian government forces began using cluster munitions in 2012 and the use has continued into 2013, causing numerous civilian casualties, according to Cluster Munition Monitor 2013 – the annual report of the Cluster Munition Coalition, of which AOAV is a member.

“Three years after becoming international law, this Convention is making a real impact in ridding the world of cluster munitions, but problems such as use of the weapon in Syria remain,” said Sarah Blakemore, Director of the Cluster Munition Coalition. “Ensuring more countries join the Convention on Cluster Munitions is an important means of strengthening the global stigma against use of this indiscriminate weapon. We call on all countries that have not yet joined the Convention to do so without delay.”

A total of 112 countries have already signed or acceded to the 2008 Convention on Cluster Munitions, which prohibits the use, production, transfer, and stockpiling of cluster munitions, and requires the clearance of cluster munition remnants within 10 years as well mandating assistance for victims. Of these countries, 83 are States Parties while the other 29 have signed but not yet ratified the Convention.

Representatives of governments, UN organizations, the International Committee of the Red Cross, and the Cluster Munition Coalition including cluster munition survivors from Ethiopia, Laos, Tajikistan and Vietnam will attend the meeting, which will be opened Zambia’s President Michael Chilufya Sata.

This is the first time the meeting will be held in Africa, previous meetings of the Convention were held in Lao PDR, Lebanon, and Norway. Nearly all of the 49 states in Sub-Saharan Africa including Zambia have joined the Convention on Cluster Munitions, with the exception of Equatorial Guinea, Eritrea, Ethiopia, Gabon, Mauritius, South Sudan, Sudan, and Zimbabwe. Nineteen African countries have signed but not ratified the Convention. Cluster munitions have been used in several African countries, including in Angola, Chad, DR Congo, Eritrea, Ethiopia, Mozambique, Sierra Leone, Sudan, Uganda, and Zambia.

States Parties are legally obliged to ensure victims are provided with adequate assistance, including those killed or injured as well as their families and affected communities. With Iraq’s ratification this year, nearly three-quarters of cluster munition victims live in countries that have joined the convention. Cluster munitions were used extensively in Iraq in the 1991 Gulf War and 2003 invasion and it is estimated there have been between 5,500 and 8,000 casualties in the country (of an estimated 54,000 globally). Children account for one quarter of these.

States are also making solid progress in destroying weapon stockpiles and clearing their land according to the Cluster Munition Monitor 2013. States Parties have destroyed some 70 per cent of their cluster munition stockpiles under the convention and cleared nearly 78km2 across 11 states and two other areas, in 2012.

“The meeting in Lusaka is an opportunity for countries to end the suffering caused by cluster munitions by adding their voice to the growing tide of countries that condemn use of these weapons as indefensible morally and politically,” said Blakemore.