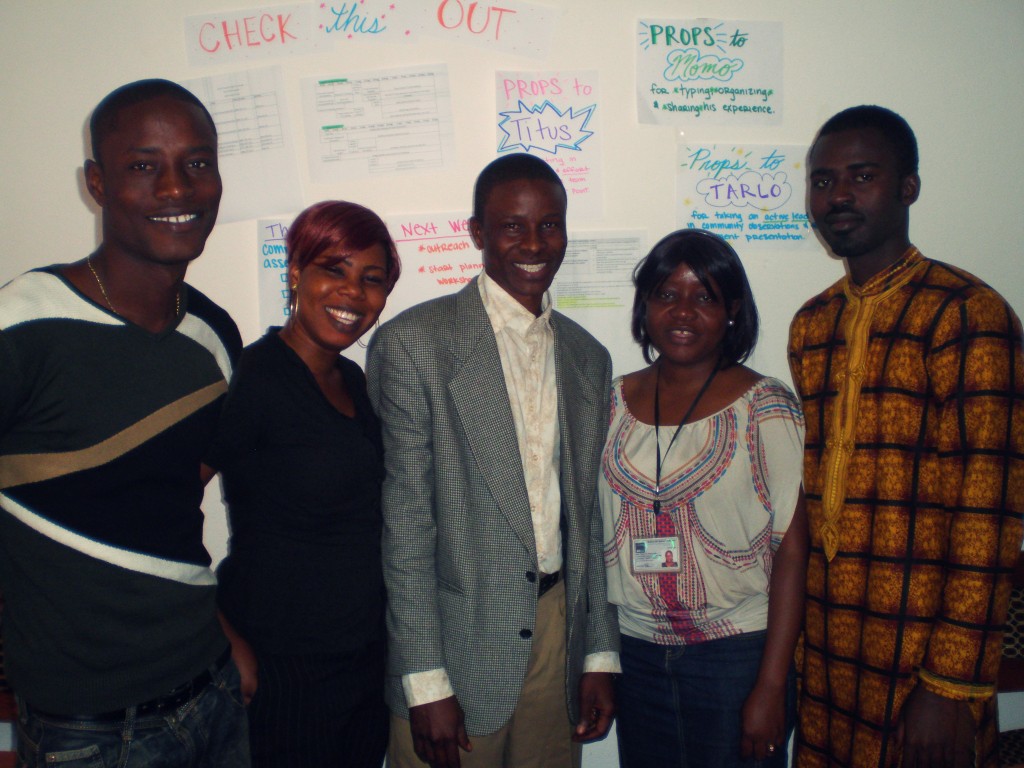 Despite common perceptions of high rates of crime and violence, West Point is a vibrant community. There are active intellectual forums that foster conversations about the direction of politics in Liberia. Women’s groups support small business through susu agreements. And young people take leadership positions to improve the quality if living in their community.  There is a sense of togetherness in the small, overcrowded community that provides West Point with a sense of community that is hard to find in other parts of Monrovia.

That was one of the biggest reasons we wanted to launch the Armed Violence Reduction Project in West Point. Yes, we already had relationships in the community thanks to a survey conducted last year. And yes, crime and violence are concerns in West Point.  But we also saw a community working to build upon its own strengths and overcome some of the stigmas associated with it.

The Conflict Transformation Teams were put together based on that resiliency. We found people in the community who were already working to resolve conflict and reduce violence. Many are nontraditional leaders: they do not hold formal leadership positions in the community. Some even have a hard time reading and writing.  But all of them are people that the community itself turns to whenever there is a conflict or a problem. One, for example, is a former policeman who patrols the beach at night, keeping an eye on his community. Another is considered a mother in her church.  One young man is a model. They all represent the diversity of West Point and all have committed themselves to working towards conflict transformation in their communities.

For 3 days in August, the team members (affectionately called CTTs) gathered at the AOAV offices for an interactive training. We talked about participatory leadership, analyzed the Principles of Conflict Transformation, and discussed expectation theory.  Participants were introduced to O.R.I.D., a tool for nonviolent communication that separates observations (facts) from reflections (feelings) and interpretations so people can make the best decisions for themselves and their communities.

They practiced active listening, using “I” statements, deescalating conflict situations, and conducting informal counseling and mediation sessions.  There were handouts and lots of role-playing so participants had opportunities to practice what they were learning.  And they asked lot of questions.  Situations that they were working through in their communities became case studies for the CTTs to decide how to best respond to.

Conflict during the training became an opportunity for the CTTs to put themselves through the transformation process. On the 2nd day, one of the elder men in the group made a statement about being amongst “criminals”. Thankfully, the group felt comfortable enough to express their discomfort with his language. Many felt attacked and some were ready to leave the workshop.

We turned the conflict into a teaching moment. Participants were asked to actively listen. They used “I” statements to express their reflections and interpretations of the facts. They asked each other open-ended questions about how they could move forward, and created their own solution. The conversation took about an hour, and by the end of the hour, everyone was reengaged in the workshop and, more importantly, with each other.

Since then, the CTTs have busy transforming conflict in their communities. Already, we’ve had 13 incident forms turned in, and we haven’t even begun an information campaign yet. That means that the team members are outreaching to their community, intervening in situations that could have become violent. Out of those 13 situations, for example, 3 involved armed violence and our team members were able to deescalate them.

And this is only the beginning. In the next few weeks, the Youth Outreach Specialists will be launching the Youth Drop-In Centers, where especially vulnerable youth in West Point will participate in interactive workshops that will cover a broad range of life-skills topics, including conflict transformation. The CTTs will receive on-going training through regular meetings, and will start holding community events to engage their communities in various topics, such as Know Your Rights workshops and meet-and-greets with the police.

Ultimately, these two programs- the CTTs and the DICs- will combine to form a strength-based, community-level, holistic approach to responding to conflict in West Point that will not only sustainably engage the community but will also ensure that there are positive outcomes.