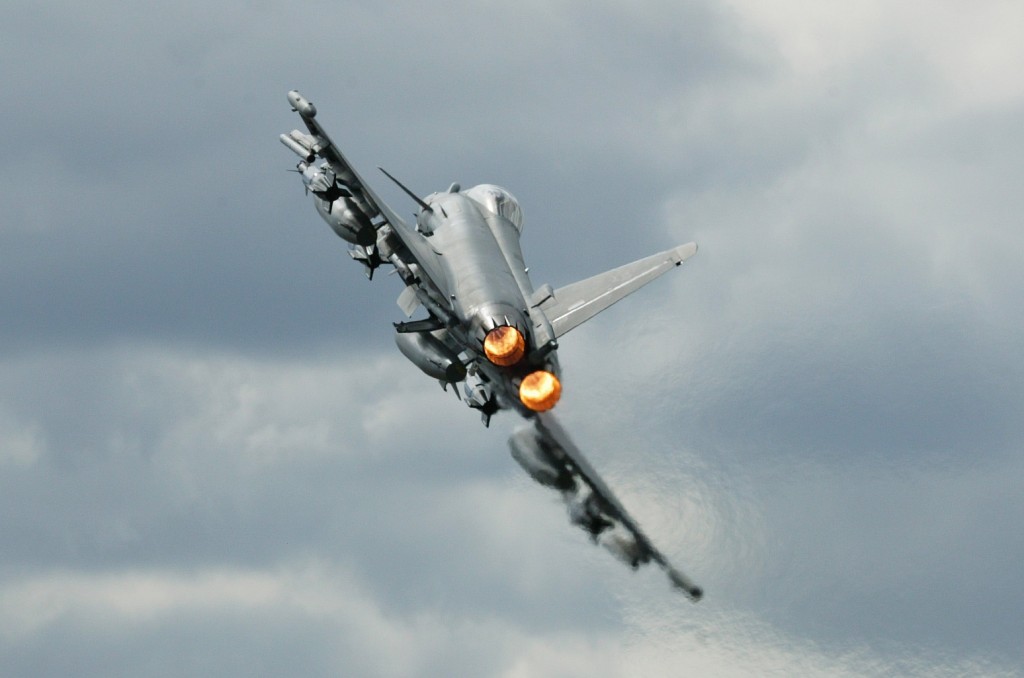 The Eurofighter Typhoon – for sale now.

The UK’s biggest arms expo, the Defence and Security Equipment International, has taken place around London’s ExCeL Centre from 10 to 13 September. Roughly 1500 international exhibitors, including most of the world’s leading arms manufacturers and exporters, were presenting their wares to an audience composed of representatives from countries around the world. The defence and security export business is tremendously lucrative for the UK economy, but the show has attracted a number of controversies.

The first of these is the attendance of delegations from countries with irregular human rights records. Campaign Against the Arms Trade (CAAT) recorded nine invitees from countries identified by the Foreign Office as those with “the most serious wide-ranging human rights concerns”: Afghanistan, Colombia, Iraq, Libya, Pakistan, Saudi Arabia, Turkmenistan, Uzbekistan, and Vietnam.

The list of invitees was only released by the government the day before the fair began – apparently to avoid embarrassing those to whom invitations were extended later. Importantly, the government does make value judgments about invitees – Syria and Egypt, for example, were not on the official invite list. Rather it implies that the government has some standards for invitations, but those standards do not closely follow the FCO’s own list of regimes with questionable human rights practices.

Another controversy arose on Thursday, when organisers ejected two firms (Magforce International of France and Tianjin Myway of China) for promoting illegal weaponry at the fair. According to Green MP Caroline Lucas, who brought the matter up in Parliament before the companies were ejected from the fair, the companies were promoting, “handheld projectile electric shock weapons, weighted leg cuffs, and stun batons,” the international sale of which are banned under the UK Export Control Act of 2002. While certainly less lethal than many of the other products on display, ranging from assault rifles to armoured fighting vehicles, fighter jets and warships, such devices – which specifically inflict pain in order to induce compliance – are judged to have an especially high potential for misuse at the hands of security services.

This is not the first time companies have been ejected from DSEi for advertising banned weapons. In 2011, Pakistan Ordnance Factory and the Defence Export Promotion Organisation (also from Pakistan) were ejected after advertising banned cluster munitions. Apparently, the consequences were not permanent, as both organisations are represented once again at 2013’s event.

Other issues surround the fair as well. Rosoboronexport, the Russian state arms export company, is amongst the distributors, even as they continue to supply arms and military equipment to Bashar al-Assad’s regime for use in his country’s ongoing, brutal civil war. This year, for the first time, DSEi plays host to an entire sub-conference dedicated to unmanned aerial vehicles, even as drone strikes continue to kill without accountability in Pakistan, Afghanistan, Yemen and elsewhere.

Fundamentally, what DSEi reveals is the deep influence that the arms trade has on British policymaking. In an unsettled economic environment, the production and sale of weaponry abroad is seen as a reliable source of income for UK firms and jobs for UK workers. The government can be blamed for its willingness to tolerate such controversies, but until there are stronger legal restrictions against the sales of arms to countries which are at a high risk of misusing them, we should not expect to see the end of such events.

“The British government can’t have its cake and eat it, too,” said Iain Overton, AOAV’s Director of Policy and Investigations. “It can’t condemn brutal human rights practises and then permit the sale of weapons to regimes that commit such brutalities to happen up the road from Westminster – which is still crawling with private defence contractor lobbyists and PR men. Both they and the arms trade should be given the cold shoulder by our elected politicians.”