Addressing the threat posed by IEDsAOAV: all our reportsIraqUnderstanding the rising cult of the suicide bomber
FacebookTweetLinkedInPinEmail 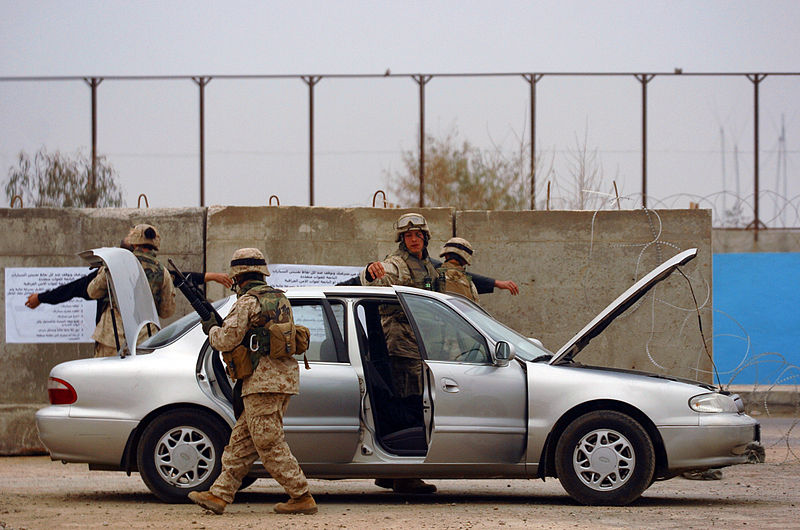 US Marines search a vehicle at a checkpoint in Ramadi

In May 2006, Nahiba Jassim, a heavily pregnant young woman, was shot and killed by US troops as she was being rushed to hospital.  Her contractions had started and the driver was desperate to get to the hospital in time. But she was never to make it.

According to confidential US military files released by Wikileaks, the driver of the car entered a prohibited area near a checkpoint. Perhaps keen to get the expectant mother to hospital in a timely manner, he didn’t notice the signals to stop until two shots were fired at his car, killing Nahiba and her cousin.

Another life was lost that day as well. Doctors at the hospital tried to save Nahiba’s baby, but were unsuccessful.

Incidents like this one are tragic in themselves. But they also illustrate just one of the many terrible and indirect effects that suicide bombings and other IED attacks have.

The particular impact here was one born from fear. As well as killing and injuring huge numbers of civilians at the moment of detonation, suicide bombings also have a lingering psychological effect, and not just on those who were present at the explosion.

This fear, this constant uncertainty, leaves soldiers barely out of their teens understandably jumpy. And all too often, left with unclear rules of how to deal with approaching threats, these soldiers have opened fire prematurely – leaving many needlessly killed and injured.

Lu Lobello, one of a group US marines who fired on a car on 8 April 2003 and killed four civilians described how he came to make such a tragic mistake: “my reasoning was they were driving toward us, of course they’re an enemy. Why would anyone drive towards the sound of a battle? And when I read from their point of view…. it just shook me because it all seemed so plausible.”

There are current policies designed to prevent trigger-happy troops taking lives unnecessarily. Police and militaries have systems and rules that regulate how to deal with vehicles and individuals who do not stop for searching when requested at checkpoints. These rules are called “escalation of force” procedures.  They are supposed to begin with visual signals like signs and lights before moving up more lethal measures including warning, disabling or deadly shots.

But these escalation of force procedures are not consistent and are often not rigorously followed. The initial policies used by the US in Iraq, for instance, caused hundreds of innocent civilian deaths.

At least 681 civilians were killed in escalation of force incidents in Iraq between 2004 and 2009. This is more than five times the number of insurgents (120) killed in such incidents.

A further 2,218 civilians were wounded in these attacks. And yet, according to research by Channel 4 News and The Bureau of Investigative Journalism, only 13 coalition soldiers were killed in escalation of force incidents in the same period.

These terrible figures beg the question: was this use of force proportionate to the threat? Clearly not.

Other reports from the Iraq War Logs, a collection of nearly 400,000 leaked field reports published by WikiLeaks in October 2010, reveal the personal tragedies of these galling numbers. The accounts are presented in sparse sometimes impenetrably technical military jargon but each has a painful story behind it.

In January 2005 soldiers from the First Brigade of the 25th Infantry Division based in Tal Afar in northwest Iraq shot at a sedan that failed to stop after visual signals were given.

“A shot was fired at the front tire but the VEH [vehicle] did not stop. The PTL [patrol] engaged the VEH, killing 2xCiv [civilians].”

What was not mentioned in this report, though, was that one of the children in the back seat had his spine pierced by a bullet. He was paralysed and would have spent his life in intolerable discomfort had his tragic life not been later cut short by a separate IED attack.

Other reports tell similar tales of misunderstanding and tragedy.

“###### reports that CIV crawled through sets of concertina wire towards the CP in Baghdad. The CIV continued to approach. The soldiers then fired shot killing the CIV.”

It turned out that the suspicious bag that the civilian seemed to be carrying contained nothing more harmful than books.

There were also a number of incidents involving the mentally ill, who simply could not understand what was being instructed of them by US soldiers.

In July 2006, at a Baghdad checkpoint, the Iraqi special police shot at a pedestrian who they suspected of being a suicide bomber.

“The LN [local national] family arrived and stated he is not AIF [Anti Iraqi forces] but mentally retarded. ISP [Iraqi security personnel] still believed the IND was a suicide bomber. The family members moved forward to the LN and rolled him over exposing his abdomen. The LN had no suicide vest.”

So many lives lost.  So many tragedies of misunderstanding.

And so detrimental to the Americans.

Incidents like these were particularly problematic to a coalition force who were following a strategy of trying to wins ‘hearts and minds’. But here, as in other conflicts, if civilians suffer death and injury at military checkpoints the consequence is the public belief that soldiers are the enemy.

In an effort to address this problem the US military introduced an Escalation of Force Handbook. Produced in 2007, the book contains detailed instructions for planning, training and active duty.

Much of the focus of the book is on ensuring soldiers and officers are able to apply consistent procedures even in highly stressful scenarios.

The aim of these procedures is to allow more time for an approaching vehicle or individual to stop before soldiers feel they need to apply lethal force. Or as the handbook says: “The desired end state is for Soldiers and leaders at all levels to understand and apply EOF procedures in order to lengthen response time and prevent unnecessary lethal force engagements.”

The handbook also includes a detailed rundown of the escalation of force that soldiers should follow to get a vehicle to stop. In this way, there are seven stages that have to happen before deadly force is authorised.

The book also includes a number of references to the UK military’s more gradual rules for escalation of force.

These practices were developed by experiences of working in close proximity to the civilian population in Northern Ireland and in the Balkans. The UK military was praised for its more restrained stance in Basra in 2006 where British troops were quick to move to wearing soft berets rather than helmets when on patrols.

The attempts to address these checkpoint deaths appear to have been something of a success.

In part this may have been due to the improved training and practices.

It is increasingly evident that clear and effective procedures that enforce the use of lethal force only as a last resort are key to ensuring that the fear of suicide attacks does not result in innocent civilian deaths.

AOAV believes, in this way, that such effective procedures should be examined more closely.

If a substantive link is established between the procedural use of restraint in the escalation of force and a decrease in civilian deaths, without there being a rise in risk to military forces, then the use of such restraint should become a matter of significant moral, if not legal,  prominence.