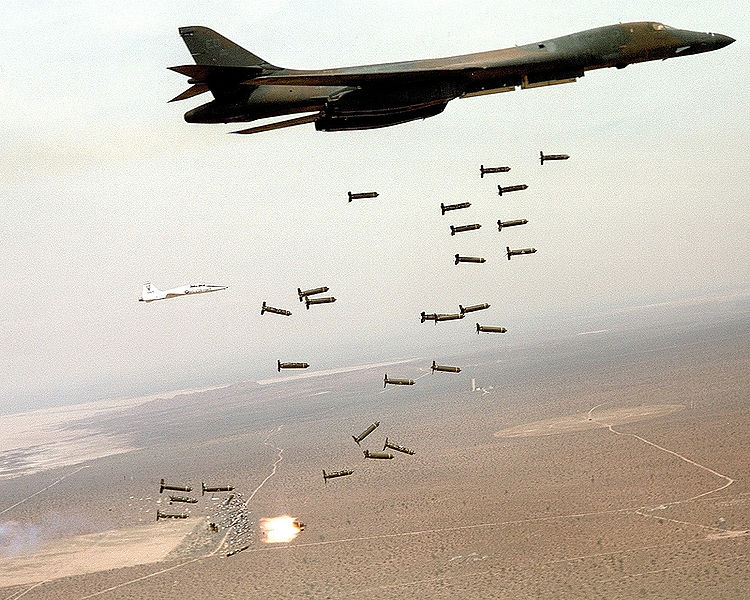 Cluster bombs have killed and injured thousands of civilians during their history of use and continue to do so today. They cause widespread harm on impact and yet remain dangerous, killing and injuring civilians long after a conflict has ended. One third of all recorded cluster munitions casualties are children. 60% of cluster bomb casualties are injured while undertaking their normal activities.

What are cluster bombs?
A cluster bomb, or cluster munition, is a weapon containing multiple explosive submunitions. These containers are dropped from aircraft or fired from the ground and designed to break open in mid-air, releasing the submunitions and saturating an area that can be the size of several football fields. Anybody within that area, be they military of civilian, is very likely to be killed or seriously injured.

As so many of the submunitions fail to work properly, huge quantities are left on the ground and, like landmines, remain a fatal threat to anyone in the area long after a conflict ends. These weapons kill and injure people trying to rebuild their lives after conflict. They stop people from being able to use their land and access hospitals and schools. They can remain a threat for decades.

What’s the problem with cluster bombs?
Air-dropped or ground-launched, they cause two major humanitarian problems and risks to civilians. First, their widespread dispersal means they cannot distinguish between military targets and civilians so the humanitarian impact can be extreme, especially when the weapon is used in or near populated areas.

Of this list, the most heavily affected states are Lao PDR and Vietnam (massive contamination), followed by Iraq and Cambodia (very large contamination.)

Of this number, the following seven countries have now signed or ratified the Convention on Cluster Munitions, formally renouncing any future use of the weapon: Colombia, France, Iraq, Netherlands, Nigeria, South Africa, United Kingdom.

Producers of cluster munitions
34 countries have produced cluster munitions. Of this number, 17 are still believed to produce cluster munitions or reserve the right to do so. The other 17 have stopped producing the weapon prior to or as a result of joining the Convention on Cluster Munitions.

* Argentina has not joined the Convention on Cluster Munition but has renounced future production.


Stockpiler of cluster munitions
91 countries have stockpiled cluster munitions. Of this number, 20 marked with an asterisk (*) have now destroyed all their stockpiles. More than a dozen others are in the process of destroying them.

* States marked with an asterisk have now completed stockpile destruction.

Why is a ban on cluster munitions necessary?
Simply put, cluster munitions kill and injure too many civilians. The weapon caused more civilian casualties in Iraq in 2003 and Kosovo in 1999 than any other weapon system.

Cluster munitions stand out as the weapon that poses the gravest dangers to civilians since antipersonnel mines, which were banned in 1997. Israel’s massive use of the weapon in Lebanon in August 2006 resulted in more than 200 civilian casualties in the year following the ceasefire and served as the catalyst for governments to seek to create a legally binding international instrument tackling cluster munitions in 2008.

What is the Oslo Process?
In February 2007, 46 governments met in Oslo to endorse a call by Norwegian Foreign Minister Jonas Gahr Støre to conclude a new legally binding instrument in 2008. The Convention prohibits the use, production, transfer and stockpiling of cluster munitions, and requires states to destroy existing stockpiles of the weapons, clear contaminated areas and assist survivors and affected communities.

Subsequent international Oslo Process meetings were held in Peru (May 2007), Austria (December 2007), and New Zealand (February 2008). Some 107 countries negotiated and adopted the Convention on Cluster Munitions in May 2008 in Dublin, Ireland. The convention was signed by 94 countries at the Signing Conference in Oslo in December 2008 and entered into force as binding international law on 1 August 2010, after it reached the threshold of 30 ratifications in February 2010, just 15 months after it opened for signature. All countries can still accede to the convention at the United Nations headquarters in New York. 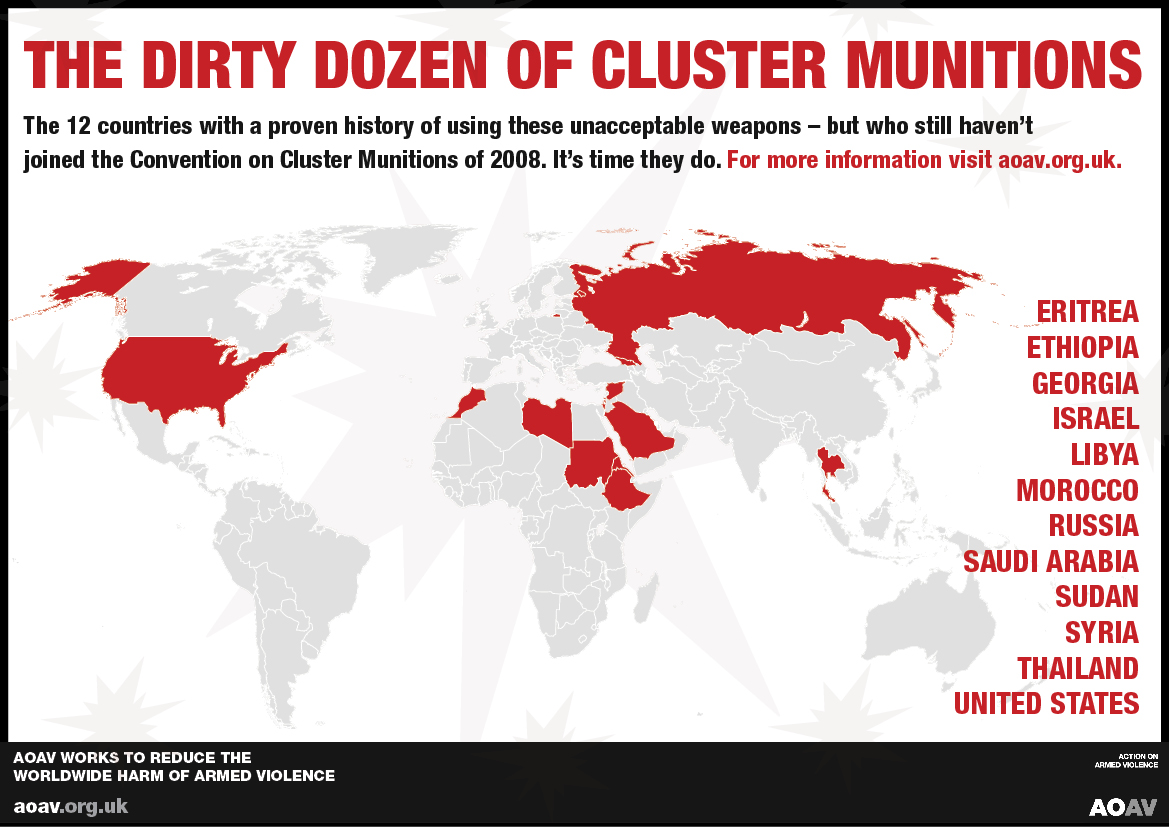 Working to ban cluster munitions: The Cluster Munition Coalition
The Cluster Munition Coalition (CMC) is a global network of more than 350 civil society organisations working in some 90 countries to end the harm caused by cluster bombs. The CMC was launched in November 2003 and founding members include Human Rights Watch, Handicap International and other leaders from the Nobel Peace Prize-winning International Campaign to Ban Landmines, which secured the 1997 Mine Ban Treaty. Since the signing of the Convention on Cluster Munitions by 94 countries at the Oslo Signing Conference in December 2008, the CMC mobilised an intensive global ratification campaign to ensure that 30 countries ratified the Convention swiftly. This happened on 16 February 2010, less than two years after the treaty was formally adopted. The CMC now works for all states to come on board the Convention and to fully implement all its provisions.