AOAV is at the forefront of international efforts to mitigate the severe human suffering caused by the use of such weapons.

We record how they kill, injure, and destroy the lives of tens of thousands of civilians each year.

Our position is clear: Explosive weapons with wide-area impacts are unacceptable for use in populated areas.

These weapons should be stigmatised and subject to strong international standards. This includes the prohibitions or restriction of their use in populated areas.

WHAT ARE EXPLOSIVE WEAPONS?

Explosive weapons are weapons that share common characteristics.  They are weapons that cause injuries, death and damage by projecting explosive blast, heat, and often fragmentation around a point of detonation. These weapons include a variety of munitions such as air-dropped bombs, mortars, improvised explosive devices, and artillery shells.

Data on the context of the incident and details of the resulting harm is recorded and analysed on an ongoing basis. The data collected includes civilian and combatant casualties, the type of explosive weapon used, the means of deployment, the user of the weapon, and the location of the incident.

Data recorded by AOAV in 2012 strongly reinforces evidence that when explosive weapons are used in populated areas the victims are overwhelmingly civilians.

Out of the total 34,758 casualties of explosive violence recorded, 78% (27,052) of persons killed or injured were reported to be civilians. This was a significant 26% increase in the number of civilians killed and injured by explosive weapons in 2012 compared to data recorded by AOAV in 2011. 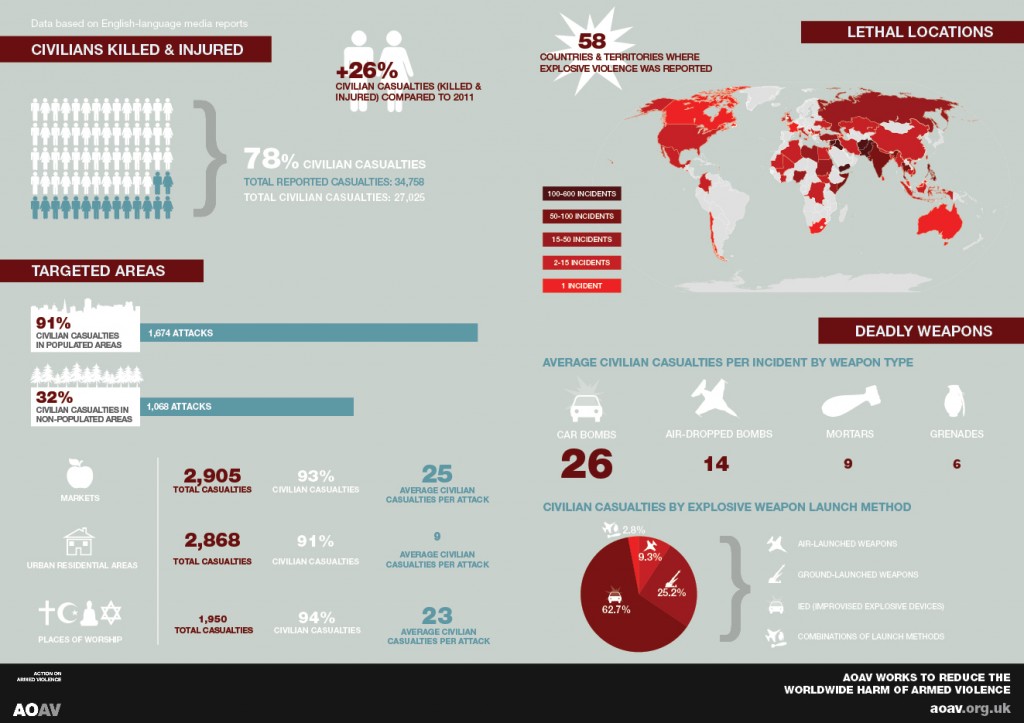 An overview of AOAV’s key findings in 2012

AOAV recorded harm from explosive weapon use across 58 countries and territories in 2012.

Syria, Iraq, Pakistan, Afghanistan, and Nigeria were the top five most heavily affected countries by explosive violence. AOAV recorded 80% of all civilian casualties worldwide in 2012 in these countries alone.

At the other end of the scale, in 13 countries there was only one recorded incident. Civilian casualties from explosive violence decreased notably in a few countries in 2012, including in Yemen, Somalia, and Libya, and ceased to be recorded in Côte d’Ivoire.

In many places levels of explosive violence remained depressingly static. 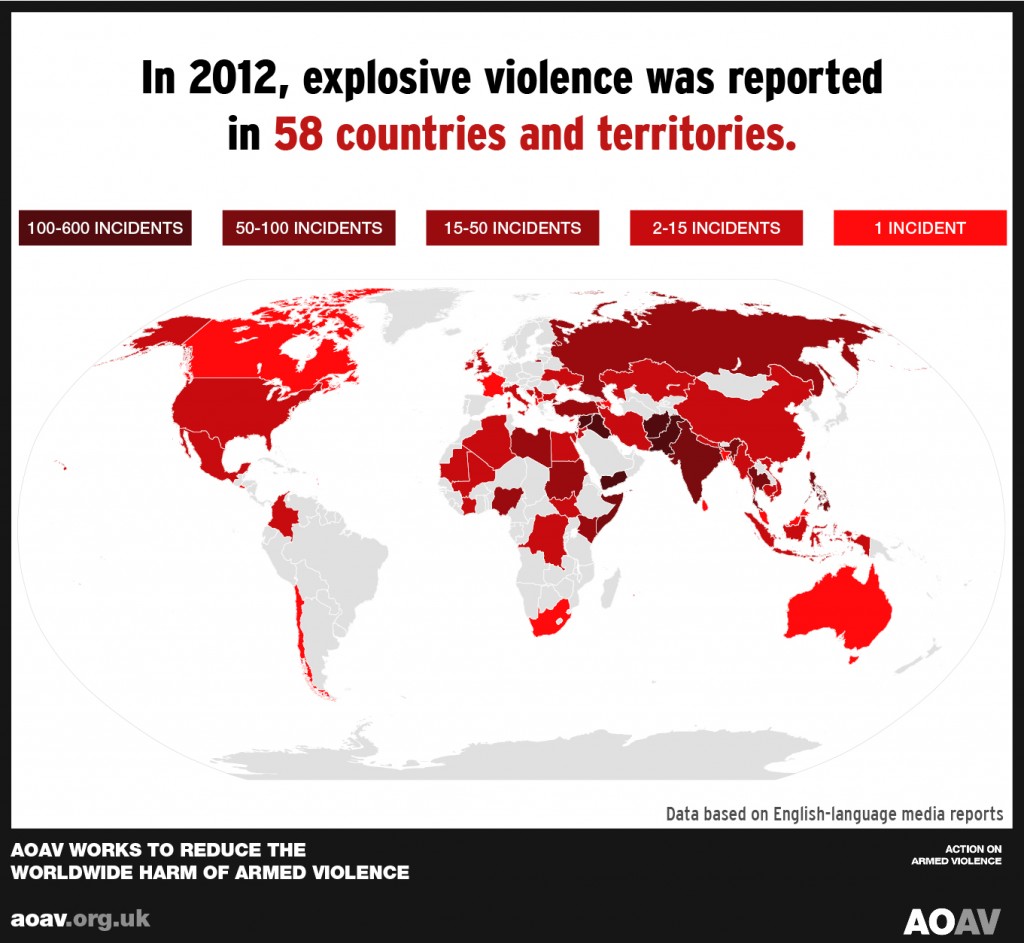 58 countries and territories were affected by explosive violence in 2012.

This increase was recorded amidst increasing concern in 2012 over the size and power of explosive weapons being used in populated areas, as well as the means of their deployment, particularly in Syria.

The majority of the incidents (61% or 1,674 incidents) occurred in populated areas.

In 2012, AOAV recorded 24,603 civilian deaths and injuries in populated areas.

In about two thirds of all these 2012 incidents, civilians accounted for 90% of those hurt or killed. This pattern is not surprising. When explosive weapons are used in areas where civilians are concentrated, civilians are at greater risk of harm.

The very nature of explosive weapons’ blast and fragmentation effects compounds the harm they cause in populated areas. In 2012, when an explosive weapon was used in a populated area, 16 people were on average killed or injured per incident. This was more than double the average recorded in areas that were not reported as populated. 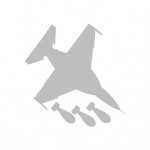 The impact of air-launched weapons in 2012 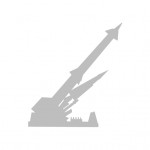 Ground-launched manufactured explosive weapons include a broad range of weapons, from small hand grenades to large artillery and mortar shells, fired from land or sea. In 2012, AOAV recorded that ground-launched weapons caused 25% of all civilian casualties reported worldwide (6,508).

The impact of ground-launched weapons in 2012 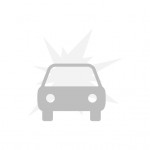 In 2012, IEDs, as opposed to manufactured explosive ordnance such as artillery or mortars, were responsible for over half (60%) of the total casualties from explosive weapons use recorded by AOAV.

The percentage of IED casualties that were civilians increased from 76% in 2011 to 81% in 2012. IEDs were the predominant explosive weapon used by non-state armed groups (73%). Civilian casualties from IEDs were recorded in 42 different countries and territories in 2012. As in 2011, IED use was particularly intense in Iraq, Afghanistan, and Pakistan. 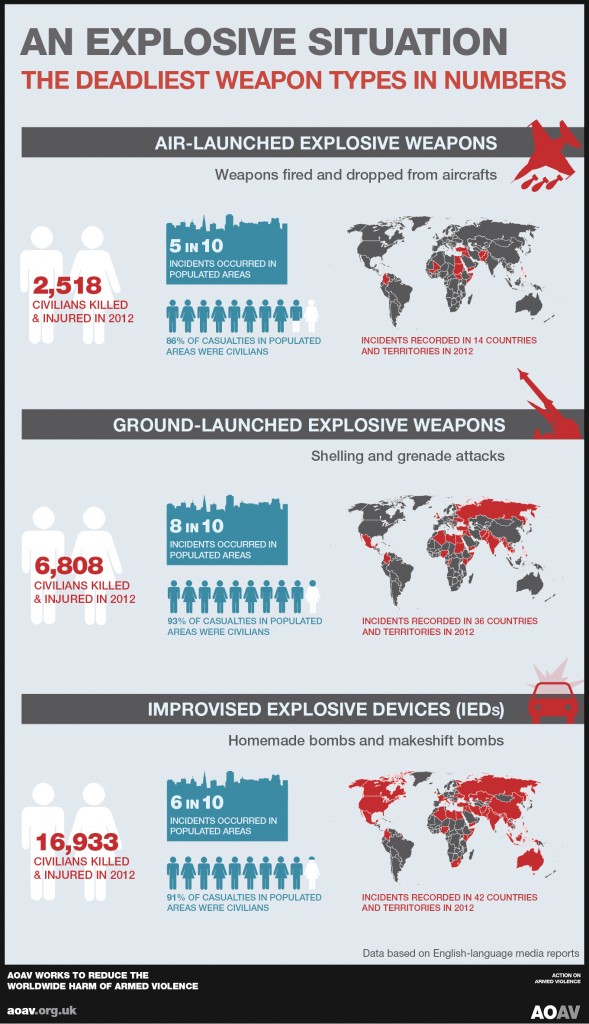 Inaccuracy of delivery
When armed actors were reported to be the target of attacks, civilians made up 52% of the recorded casualties. When attacks targeting armed actors occurred in populated areas, the percentage of civilian casualties increased dramatically to 80%.

Multiple munitions
The use of multiple explosive weapons in combination simultaneously across urban areas was one of the most destructive patterns of explosive violence recorded by AOAV. More than 2,500 casualties were recorded worldwide from the use of combinations of ground-launched explosive weapons, like when rockets, artillery, and mortars were used to shell Syrian cities.