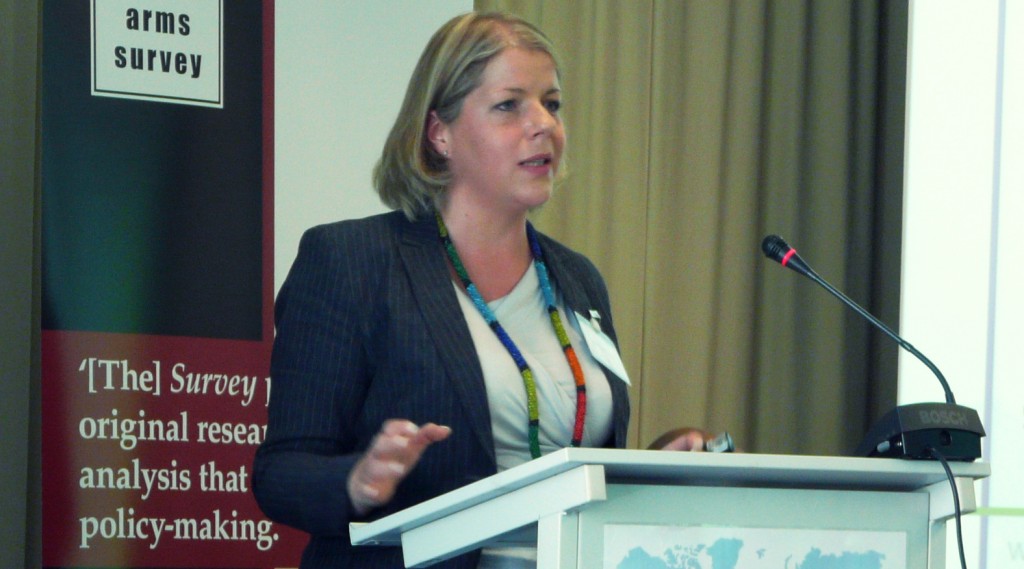 Lizette Lancaster is Project Manager of the Crime and Justice Information and Analysis Hub at the Institute for Security Studies (ISS) in South Africa.

AOAV: What does the Institute for Security Studies do?

Lizette Lancaster: The Institute for Security Studies is a research think tank working and operating in Africa. It has got offices in various places in Africa, with the head office in Pretoria, South Africa.

We look at research and implementation of work around safety and security in Africa as a whole and in particular countries. So it’s quite a wide spread thing we do.

AOAV: Which kind of information do you collect?

LL: We try and collect almost everything. We are one of those who will not say no to any data, but our primary source would be Administration or Official Crime Statistics, as well as performance data from the different departments in the Criminal Justice system, as well as the associated departments.

The government is very good at having the different departments, and they provide quite robust detailed annual reports and data but they don’t talk to one another.

What we are trying to do is to make data publicly available, electronically, in formats that are easy to use – such as Excel. We would often take the PDF files that we get from the different departments and restructure them into something that makes a bit more sense, is more condensed and easier to use.

The other would be to look at analyses that take into account different studies, so we try and publish that under different topics as well. So, it is part repository, part repackaging of data, but mostly it is trying to look at credible, accurate sources and then putting it to one place in a way that makes sense.

AOAV: Once you have collected and repackaged this information, who uses this data? For instance, who uses the information about police that you just mentioned?

LL: First of all the police itself. In one very interesting example, we’ve had police station commanders giving us feedback that now they know how more about the crime situation in the areas around their. Usually they would get information for their area, but not necessarily for areas around them.

It interesting a lot of the stuff that we see are quite qualitative and sort of anecdotal. We have had requests for data from different data sources, users of data, like the National Prosecuting Authorities.

We know that the national police service – and also crime intelligence – are the ones who gather, administer and package the data for the police. They have modelled their sites on what we’ve been using, because you can see how their maps have changed.

We also get a lot of Media requests. We’ve had community-policing forms that would come to us wanting some of the maths or advice on how we would disseminate that. We’re often asked to do presentations. We have had initiatives – for instance, one being the violence and prevention through urban upgrading programme that comes from the German Development Bank. They would approach us and ask if we would have any data that they could use in order to help them select sites.

Although we don’t have direct impact, we have had government departments – like provincial departments of community safety – asking us to give them information to whether they can tag onto our social media for instance, so they can get their campaigns rolled out.

AOAV: Do people who make requests for information, get back to you to let you know how they have used your data?

LL: That’s one of our biggest challenges. It’s having an understanding of how our data and how the website gets used. One of the things we sorted out was a registration process. If you wanted to access the data, you have to register, so at least we knew where you came from, who you are and we hoped to make little surveys with those people, so that we understand it was useful and do a little bit of impact evaluation.

But we’ve learned very quickly that 75% of our traffic comes from South Africa. And people don’t seem to have the patience to struggle with such sophisticated registrations so all it did was divert a lot of traffic from our website.

So we thought: it’s about public access more than anything. That should be the absolute principal. When people don’t find something on the site, we get data requests via e-mail. That’s also a very valuable source to categorise those requests. We can see that a lot of it is media.

AOAV: How does all of this reduce armed violence? Do you think monitoring violence can reduce violence in any way and if so, how?

LL: I can’t speak for armed violence observatories in armed conflict environments. I can only speak for the purposes of our crime observatory in a post-conflict situation.

Do I think that an observatory of our nature can reduce violence? No, I don’t. What I think it does, is empowering. I don’t say it’s doing it now but the ultimate aim is to empower policy makers, to empower communities and different role players, even the media.

Understanding violence – its causes, its nature and its scope – will eventually help inform future practitioners. There are many misconceptions and there’s a data overload. People are not going to read it all. People are not going to understand it all, so it’s about data translation for us. We hope that this will indirectly feed into policies and perceptions that would then reduce violence.

For instance, we put a lot of emphasis on research, and identify gaps of research as well. One of the things my colleagues are busy with right now, are studies on parenting and on early interventions in parenting. If we publish this research, we hope to change mind-sets and make society and communities understand the value of interaction of violence at early age.

We’re just getting that policy mind shift and fear management – in a country like ours where fear impacts quality of life, leads to marginalisation and problems with perceptions of freedom or liberty.

AOAV: How would you concretely address these fears?

LL: By giving accurate information. There’s an example that happened this week, actually:

There is this very popular singer of African white background who quoted very accurate figures on how white people in the country were safer in the apartheid and that they are now being murdered. He was talking about black on white violence.

He put this on Facebook – he’s got 200,000 followers – and it got picked up by the media. He unpacked this whole thing about how there are parts of the population, no matter how small, believing that they are being killed.

So the media approached us to check the facts of his statement.

We only had very thin official data available but by backing it up through other means we ensured that the data was reliable. We told them that we didn’t do population analysis anymore but that we could take findings from previous years.

It turned out that only 1.8 per cent of white people were killed according to this document analysis of homicides. That means they are actually disproportionately less killed – which means that you are more likely to be killed if you’re black.

So we manage to unravel the situation and proved that those figures were completely inaccurate.

AOAV: So there is no genocide happening in the country of white farmers?

LL: This is only the perception. We are trying to show through research, and through police inquests, that it is actually armed house robberies and home invasions that are increasing.

This is what happens in urban settings or in rural settings. It so happens that most high-income households in rural settings are farmers. Because of the polarising feelings of modernisation of the previously minority that ruled the country, it’s now perceived as if there was a political motive behind these murders.

Our research tells us that this is mostly due to socio-economic conditions and it is actually just a normal crime, rather than a systematic organised targeted genocide. It’s opportunistic.

We are not saying that there is not some racially motivated aspects behind, perhaps the degree of violence, but we are saying you cannot say it is genocide.

Those are the things we unpack the whole time – it is expectation management.