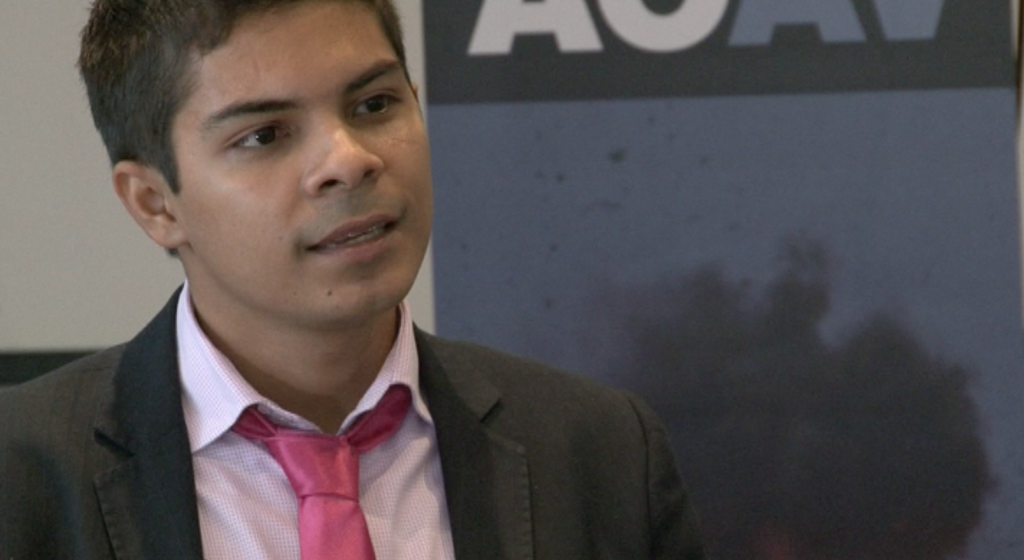 AOAV: Can you explain what the Colombian Campaign to Ban Landmines does in your region?

Mario Alberto Quiñones: The Department of North Santander, the Departamento de Norte de Santander, is located approximately 16 hours away from the capital in Eastern Colombia, bordering Venezuela. It has the most active border in Colombia and is one of the four areas where armed conflict has been intensified in the last few years.

In this area, non-state armed groups such as FARC, ELN operate, known to be very aggressive and very violent. It was also determined that the Department of North Santander is one of the five departments most affected by landmines.

The Department comprises an area known as the Catatumbo region, in the North, where illegal cultivation and micro drug traffic are abundant and linked to the non-state armed groups. This has resulted in a high presence of anti-personnel mines and consequently a high number of accidents in the civil population and also military personnel.

Whilst analysing these numbers we observed that the civil population is getting more and more affected by anti-personnel mines, for which we have several explanations: the military, of course, has more preparation and better equipment to prevent this type of accidents. Communities end up being close to attacks and violations of human rights. They end up being in the centre of armed conflict and thus, it is essential that the Colombian state protects them.

What we found is that the most vulnerable populations are those who are more likely to be affected; we are talking about the children, youth but also women. These populations did not use to be too close to these landmines before. Now landmines are being placed in places with schools, they are placing more explosives on the roads, in places where there is a stronger presence of public authority.

Improvised explosive devices are arriving more and more in the urban areas but there is a higher probability that someone steps on a device and remains there. This brought up a problem regarding the role of the state to respond to victims and communities.

In 2011, the Colombian state launched Act 14/48, the victim’s act, which represented a great challenge. It does not only recognise that there is an armed conflict but also requires the Colombian state to respond to the victims who were left with no response for many years. However, we found that in the last 2 years, not only in the Department of North Santander but also in the whole national territory, state responses were just too slow.

For example, there is meant to be only one official institutionalised register for victims, but some victims are registered somewhere else and not all victims of the conflict have been registered. In regards to the landmine victims, we find that they face many difficulties to access health services, exactly because of this reason.

We found cases where victims are not attended by the public health services because it is not clear who will pay for them, despite Colombia’s Act 100, which makes health services available to everyone.

This converts the victims of anti-personnel explosives into a very complex class of victims. When someone becomes disabled, that person will be disabled for the rest of their life. That person will require the state services, the social services during all their life and their family’s lives.

In other cases, such as displaced victims, the victimising incidents are temporary and the State must comply during a certain period of time. Therefore, the challenges are considerable and the expectations are very high. We see it as a great opportunity; however, we also see that there is lack of attention that results in more victims.

On the other hand, we are observing – with great concerns – certain situations regarding the protection of civilians. In three particular cases, and not only in North Santander but also at a national scale, we are referring to, first of all, the children.

As I explained, they are connected to high incidence in this type of accidents, not only with anti-personnel explosive devices but also with armed conflict in general. We are observing that schools are attacked.

We also have the problem with the indigenous population who are trapped in the middle of illegal crops and in some cases are being confined. They cannot move in their own area, because they could step on an explosive. We have a case of the Awá in Nariño who are suffering with this situation, but also other communities at the national level that are also affected.

And finally, the case of the eradicators who are civilians contracted by the state and who are taken to high-risk areas with existing anti-personnel mines and illegal cultivation.

Our concern is not only that these victims are given a response but also the state has to stop let these people get to these regions as it doesn’t comply international human rights and is against the Ottawa Treaty, which forbids states to expose the civil population to such areas.

We are not only concerned about North Santander but also about the national level.

AOAV: How are you working on victim assistance?

MAQ: The NGO Colombian Campaign Against Landmines has been formed in 2000, looking for ways to guarantee the rights of these victims. But in the last year, our aim has not only focused the victims of landmines, which obviously is a large portion of the most vulnerable victims in Colombia. We have also been focusing on disarmament; armed violence and that has slightly broadened the scope of incidents that we can monitor.

In the particular case of North Santander, I am responsible for accident prevention, which consists of showing and giving tools to communities so they can realise that there is a risk. We cannot reduce that risk in the short-term, but at least we can try to prevent any types of accident.

We have had some interesting results and in areas that traditionally were very close to areas with explosives, such as the Tibú municipal, we observed that there were no victims in the last year. Depending on the community’s will it is possible to prevent this type of accidents.

But we also recognise that if explosive mines exist, then there will continue to be victims.

For this reason we have a second procedure, which involves assisting the past and new victims, by providing them with some resources, like an overview of their rights so that new victims are guaranteed help when dealing with institutions.

In third place we aim to maintain the dialogue with governmental institutions. This includes giving State officials training and resources about the best way to guide victims regarding their rights. Through this framework we are looking for a policy that legally entitles the victims of armed conflict to assistance.

In contrast to this, we also monitor the conflict with data analysis – although we do fully trust the information that is managed by the State. We think that the official data does not reflect the real numbers. This is why we try to provide information so the data is more accurate and truthful.

We are very conscious that it is important to have a field monitor and therefore we collect relevant information, such as the condition of a person’s family, what type of attention did this person received, or how victims are being followed-up and their rehabilitation process.

We also make sure this information reaches victim associations that can also help claim their rights. It is important to follow these institutions that guarantee the rights and the assistance of its victims.

With some of the resources we were possible to obtain – in this particular case from the Norwegian government – we have been able to give more capacity to the associations and its members with a more practicable knowledge than what is the law.

Instead of a 500-page book, they should learn what to do in case of emergency, where to go to and what to propose to the institutions so the assistance to victims improves.

This is a way to transform the discussion from victims into talking about survivors.