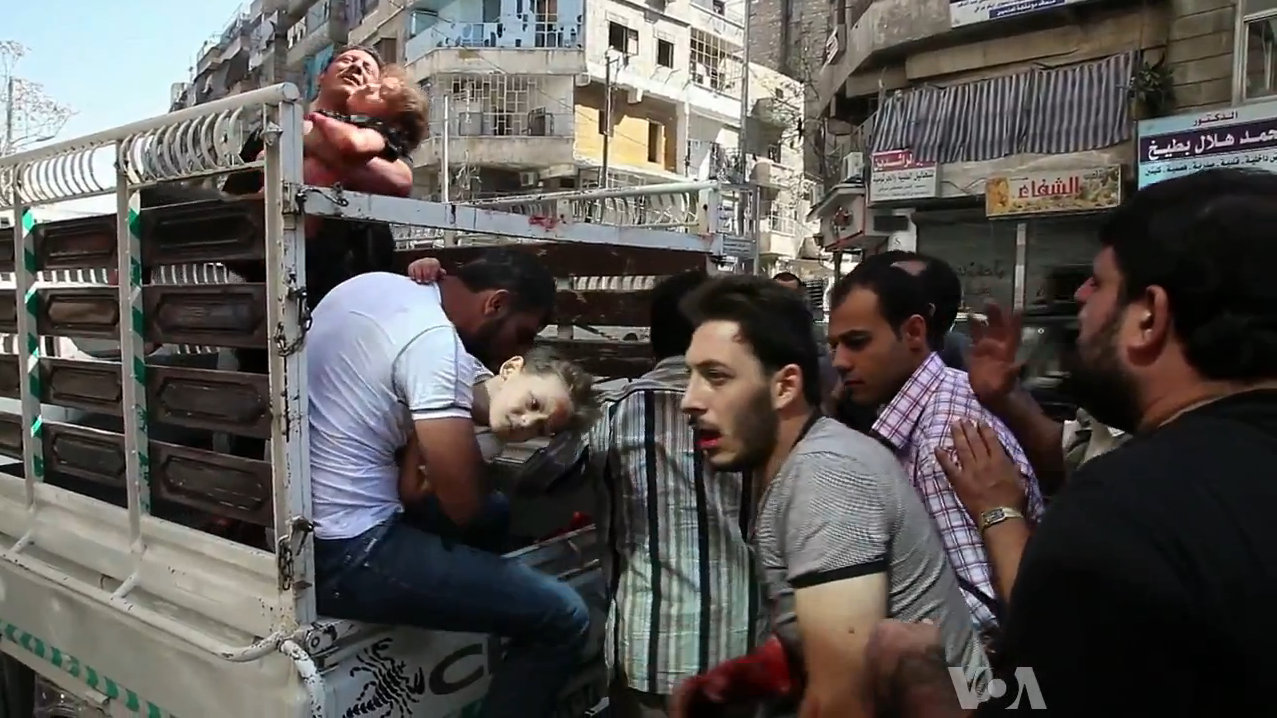 Wounded civilians arrive at a hospital in Aleppo

The Friends of Syria group or ‘London 11’ – including Britain, Egypt, France, Germany, Jordan, Italy, Qatar, Saudi Arabia, Turkey, the United Arab Emirates and the United States – issued a communique today, strongly condemning the regime’s escalating indiscriminate attacks, including use of sarin, SCUD missiles, air and artillery strikes and brutality on the ground.

1. The Friends of Syria Core Group of countries – the ‘London 11’ – unanimously welcome the agreement by the UN Security Council on 27 September on the urgent need for political transition and its endorsement of the Geneva communiqué, the objective of which is the formation by mutual consent of a Transitional Governing Body (TGB) with full executive powers, including over security, military and intelligence structures.

2. We agree that when the TGB is established, Assad and his close associates with blood on their hands will have no role in Syria. There must be accountability for acts committed during the present conflict.

3. We strongly condemn the regime’s escalating indiscriminate attacks, including use of sarin, SCUD missiles, air and artillery strikes and brutality on the ground. The regime bears the responsibility for the bloody conflict and continues to block urgent humanitarian access on the ground. The regime’s actions on the ground are undermining the potential for genuine political transition. The regime must commit itself to the full implementation of the Geneva Communiqué, and demonstrate that commitment through its actions at Geneva II.

4. We welcome progress made on Geneva II preparations and pledge our full backing for the Joint Special Representative. We underline the need for intensive preparations for Geneva II, which, subject to further progress, could take place in November. The process should move forward as set out in paragraphs 10 onwards.

5. We urge the National Coalition to commit to the Geneva II process, with all parties accepting the June 2012 Geneva Communiqué. The London 11 recognise the considerable challenges faced by the opposition. We will step up our joint efforts to channel support to the National Coalition and the Supreme Military Council of the Free Syrian Army. We will continue to provide  enhanced support to build the capacity of the opposition to deliver basic needs on the ground.

6. We are gravely concerned at the appalling humanitarian situation, including the siege by regime forces of Moadamiyeh, Homs, Aleppo and Hassakeh, where thousands of innocent Syrian civilians, including women and children, are trapped and living in desperate conditions. In addition to the terrible human cost, this fuels support for extremist groups. We call for urgent action to increase humanitarian support, and the granting of full and unfettered access, including for cross-line and cross-border efforts into and within Syria. In particular, we call on the Syrian regime to give full cooperation to the UN agencies and international NGOs, in granting them the licences, visas and travel permissions to allow them to meet the spiralling needs of the Syrian population across the country.

7. We recognise that the horror of the conflict is driving civilians to seek refuge in neighbouring countries in ever greater numbers, creating a growing regional crisis. We agree to continue to support those neighbouring countries generously hosting Syrian refugees and call on the international community to increase its support for those countries.

8. We share growing concern at the spread of extremism and extremist groups, including ISIL and Jabhat al-Nusra. We call for Iran, Hizballah and all other foreign fighters and forces to withdraw from Syria. These pose a threat to moderate forces, the territorial integrity of Syria and to regional and international security.

9. We also welcome the UN Security Council’s agreement to ensure the elimination of the Syrian regime’s chemical weapons. All the evidence on the 21 August attack points clearly to regime culpability, which reinforces the need for full implementation of UNSCR 2118.

10. The Geneva II conference must lead to a political transition based on the full implementation of the Geneva Communiqué of June 30, 2012, while preserving the sovereignty, independence, unity and territorial integrity of the Syrian State.

11. The future Syria must be democratic, pluralistic, and respectful of human rights and of the rule of law. Every citizen must enjoy full equality before the law regardless of his religious or ethnic background.

(a)   the establishment, by mutual consent, of a TGB with full executive powers with control over all governmental institutions, including the armed forces, security services and intelligence apparatuses.  The TGB must be the only source of legitimacy and legality in Syria, and any elections in Syria must be conducted within the framework of the political transition;

(b)  the adoption, by the parties, of a declaration on the principles, steps and timeframe of the political transition to democracy.

13. Negotiations to form the TGB  must not be open-ended.  Delaying tactics  should not be tolerated. It should be possible with the commitment and good faith of both sides to establish the TGB expeditiously within the coming months.

14. Both the Syrian regime and the Syrian National Coalition must adhere publicly to a political transition based on the full implementation of the Geneva Communiqué, prior to the Conference.

15. Those countries participating in Geneva II must have fully committed to a political transition based on the full implementation of all provisions of the Geneva Communiqué, and be willing to contribute to the success of the Conference on the basis of the objectives listed above.

17. The agreement, which will be signed by the parties, certified by the participating states, and endorsed in a United Nations Security Council Resolution, shall be enforceable. Participating States in Geneva II, in particular the permanent members of the Security Council, will share the responsibility for ensuring the full implementation of the political transition in Syria, including ensuring serious consequences in the event of non-compliance. We are prepared as a group to pursue all possible options to secure compliance.

18. The Geneva II process must lead to tangible benefits to the Syrian people:

(a)   immediately, as set out in the Geneva Communiqué:

(i)    all arbitrarily detained persons must be released, starting with the most vulnerable;

(ii)  humanitarian access in the whole country must be allowed, including through local ceasefires (as well as cross line and cross border operations into and within Syria as subsequently stated in the Security Council Presidential Statement of October 2, 2013);

(jj)  all sides should urgently create conducive conditions for the return of refugees and meet the needs of the internally displaced persons concentrated in certain areas who seek refuge and protection;

(iii) the Syrian regime must end the siege of urban areas and the indiscriminate attacks against civilians, in particular through air bombardment and the use of ballistic missiles, cluster bombs and explosive barrels;

(iv)journalists must be guaranteed freedom of movement throughout the country and freedom of peaceful demonstration and expression must be protected; and

(v)  instructions must be given to Syrian embassies to deliver and renew passports of Syrian citizens without discrimination;

(b)  in the course of negotiations, all parties must put an end to the use of heavy weapons, and the withdrawal of foreign combatants out of Syria must be secured; and

(c)   as of the establishment of the TGB, all parties must cooperate with the TGB in ensuring the permanent cessation of violence.