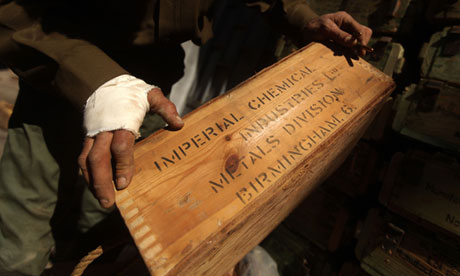 A Libyan rebel carries a box of British-made ammunition found at a military base in Benghazi in February 2011.

The UK government must urgently explain why it is issuing licences for the sale of lethal weapons to repressive regimes including those on its own list of countries of human rights concern, the NGO body Control Arms UK, of which AOAV is a member, said today.

A damning new report from the UK Parliament Committee on Arms Export Controls (CAEC) published today exposes the extent of arms sales to countries – including Libya and Sri Lanka and Saudi Arabia – where they could be used to commit human rights violations.

This revelation comes one month after Foreign Minister Alistair Burt signed the UN’s Arms Trade Treaty designed to stop the transfer of arms where they are likely to be used for serious human rights abuses.

The CAEC report finds that there are “over 3,000 [current] Government approved export licences, worth more than £12 billion, for strategic controlled goods going to the FCO’s [Foreign and Commonwealth Office] 27 Countries of Human Rights concern”.

Oliver Sprague, Amnesty International’s arms control expert said: “Looking at these, the Government’s own figures, it would be hard not to conclude that the UK’s government’s arms sales practices are at odds with its stated policy not to send weapons to anywhere that poses a clear risk that they could be used for human rights violations.

“What is needed now is an urgent explanation of what these licences were actually for, who was going to use them and what assurances were in place to ensure they were not going to be used for human rights violations.  Until there is much greater transparency over exactly what we are selling and to whom, it will be impossible for Parliament or the public to have confidence in the UK’s arms sales policies.”

The CAEC report states that military equipment including small arms, sniper rifles, crowd control equipment, and in some cases components for man-portable air defence systems (MANPADs) and combat aircraft, have been licensed for export to countries on the FCO list.  Countries to which these transfers are particularly worrying include Egypt, Iran, Libya, Pakistan, Russia, Saudi Arabia and Sri Lanka.

Saferworld’s Head of Arms Transfer Controls Roy Isbister said: “There is reason to question whether the UK government has learned the lessons of the Arab Spring.  Looking at the export licences the Government is still issuing, especially to authoritarian or unstable regimes, including in the Middle East and North Africa region, it’s hard to see what has changed.

“For many of the countries mentioned in the report, there are serious risks that arms or ammunition could be used to undermine human rights, oppress civilian populations, fuel conflict or be diverted elsewhere.”

Oxfam’s Head of Arms Controls Anna MacDonald said: “Less than two months ago the UK government pledged  to stop the sale of arms to repressive regimes, but this report shows that it is paying little more than lip service to that promise. It must put its money where its mouth is and stop allowing the sale of weapons to countries where they may be used to kill, injure and torture innocent civilians. ”

Background
The countries and associated transfers which are most of concern include:

Egypt
Egypt is not currently within the FCO’s designated 27 Countries of Human Rights concern, an issue with which the CAEC has taken exception.  There are currently extant standard individual export licences worth £59,073,314 for exports to Egypt.  These include licences for body armour and components for combat vehicles, as well as more than £4 million worth of small arms, and ammunition, components and related equipment for small arms, including:

In addition, there are also licences which place no limit on the scale of exports (“open licences”) for Egypt which include a wide range of equipment such as:

Libya
Licences valued at £54,583,388 are outstanding for exports to Libya, including:

Madagascar
The value of extant licences for exports to Madagascar totals £24,348,066.  Most of these are for the transfer of small arms and their ammunition, including:

Pakistan
Equipment authorised for transfer to Pakistan includes: components for combat aircraft and combat helicopters; components for man-portable air defence systems (MANPADs); components and related equipment for sniper rifles; weapons sights; small arms ammunition, electronic warfare equipment; and £9 million worth of equipment for producing artillery ammunition.  There are also a large number of open licences (which place no limit on the scale of exports) for Pakistan which cover a huge range of offensive equipment for air, land and sea.

Russia
Outstanding licences for exports to Russia are valued at £86,329,387.  These include:

In addition, the UK has issued an open licence (which places no limit on the scale of exports) for technology for a wide range of equipment such as missiles, combat aircraft, combat helicopters, fire-control equipment, combat vehicles, tanks and weapon sights.

Saudi Arabia
For exports to Saudi Arabia it seems to be very much a case of “business as usual”, with existing licences for all types of military equipment worth over £1.863 billion, predominantly for combat aircraft but also for:

In addition, open licences (which place no limit on the scale of exports) were issued for a vast array of equipment including components and/or technology for aircraft, naval vessels, missiles, small arms and light weapons.

Sri Lanka
The UK has authorised small arms and components and related equipment (including weapons sights) for small arms, small arms ammunition and riot-control equipment to Sri Lanka to a value of approximately £5 million, including:

Iran
While most controlled exports to Iran are for civilian aircraft, the UK has licenced the export of more than £2.5 million worth of components for military electronic equipment

Unmanned aerial vehicles (UAVs)
In addition, it is noticeable that the UK is now issuing export licences for components and/or technology etc. for UAVs to a surprising number of these destinations, such as Bahrain, Colombia, Israel, Libya, Pakistan, Russia and Saudi Arabia.