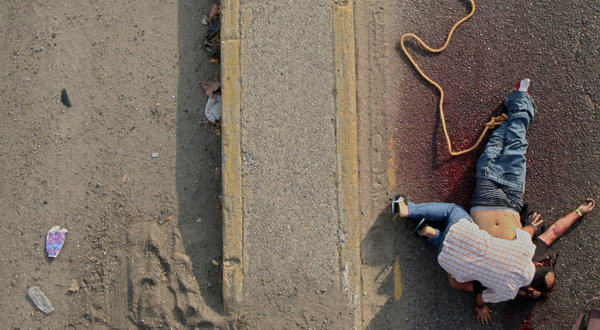 For all the news and emotion surrounding the debate over mass-shootings and gun-control within the United States, another related tragedy has been unfolding simultaneously just across the border.  But unlike in the US, this tragedy has much greater bloodshed and much less media attention.

Since 2006, tens of thousands of people have been killed in Mexico in drug-related violence. The numbers dead are similar to a conventional war.  But in contrast to other conflicts with comparable casualty figures, the violence in Mexico is largely carried out with small arms. Admittedly, there have been a few notable incidents that involved grenades, anti-tank rockets and incendiary weapons, but the victims in Mexico are generally dying by gunfire.

And the guns that are killing them are mostly imported from the United States.

The American public debate over gun ownership has recently intensified in the wake of 2012’s spate of mass shootings.  Such killings led to the first major Congressional action on gun control in nearly two decades. But despite massive popular support and the moderation of the bill’s proposals, a minority of Senators were able to block the legislation from passage.  This ended any prospects of new gun control measures for the immediate future.  It also effectively condemned more Mexicans to an early grave.

The continued laxity of American gun laws is a boon for Mexican drug trafficking organisations.  This is because the US civilian market is their single best source of arms. Mexican gun laws include stringent weapons registration requirements and prohibit the possession of weapons that can fire military-calibre ammunition.  These restrictions effectively limits Mexican citizens to a much more carefully monitored ownership of guns.  Legal ownership is largely limited to small-caliber handguns, hunting rifles and shotguns. These weapons, while certainly capable of causing grievous injury or death, are not really suited to sustained firefights that recent years have seen happening regularly in Mexico.

And who said the US gives nothing back to Mexico?

But the weapons we are seeing used in the Mexican drug wars are much more powerful than what the law permits.

Some weapons, especially assault rifles, general-purpose machine guns, and explosive weapons like hand grenades and rocket launchers can be sourced from the arsenals of post-Cold War Central American militaries, and some others might be provided by deserting or corrupt Mexican police officers or soldiers as well. But neither of these sources has the breadth, depth or ease of access as the civilian gun market in the United States.

Compared to their Mexican neighbours, Americans face relatively few restrictions on the scope of their weapons purchases. While the sale of some of the most dangerous weapons – grenade launchers, explosives, suppressors, fully automatic machine guns, and large-calibre cannon – is heavily restricted by federal law, more “ordinary” arms are easily accessible.

The weapons of choice
Of primary interest to drug traffickers are the so-called assault weapons. These rifles are effectively identical to the standard arms of infantry soldiers the world over, lacking only the provision for automatic or burst fire. Most modern assault weapons fire intermediate cartridges with effective ranges of 300 yards or more, and can be equipped with magazines holding between 30 and 100 rounds, allowing extended fire without reloading – a massive tactical advantage.

Other favoured weapons for Mexican drug trafficking organisations include large-calibre sniper rifles and anti-materiel rifles, particularly the .50 calibre Barrett models, which are reputedly capable of destroying a car’s engine block with a single shot from a mile away.

Semi-automatic personal defence weapons (the civilian versions of submachine guns such as the Heckler and Koch UMP and FN P90) are also frequently recovered by Mexican security forces, along with a wide range of shotguns and semi-automatic pistols.

The cost of acquiring such weapons are negligible for trafficking groups whose profits are estimated in the billions of dollars: variants of the AR-15 rifle (the civilian version of the U.S. military’s M-16) can be bought brand new for a little over $1000, pistols and shotguns for a few hundred dollars, and the hugely powerful Barrett M82 for about $10,000. Even factoring in the labour cost of the straw purchaser (an individual with a clean criminal record who legally purchases the weapons at an American firearms dealer), the cost of procuring ammunition and the cost of moving the weapons across the border, the advantages to traffickers are considerable.

Combined with the benefits of being able to bulk-purchase weapons in brand-new condition, it is easy to see why buying American is so popular amongst Mexican drug trafficking groups. An exact estimate is difficult to come by, but the U.S. Bureau of Alcohol, Tobacco and Firearms (ATF) found in 2011 that 20,504 of 29,984 firearms (68%) recovered in Mexico from 2009-2010 were either manufactured in or imported into the United States before being moved into Mexico. 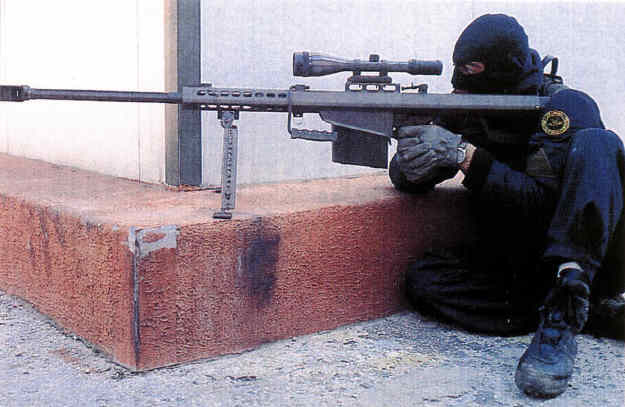 The results of this trade are nothing less than horrific. While these arms may be marginally less effective than purpose-built military equipment on account of their lack of selective-fire capability, they are infinitely more dangerous than the small-calibre revolvers and bolt-action rifles available on Mexico’s civilian market. Semi-automatic weapons with high magazine capacity allow for much more indiscriminate fire, and the military-calibre ammunition fired by such weapons are more than capable of penetrating cover and causing casualties unseen or unintended by the shooter. These capabilities increase violence at both the high and low ends of the market: professional sicarios (hit men) become emboldened by their ability to take on police and military forces, while the many who are not are far more dangerous for both their targets and anyone else nearby.

This is important because violence in Mexico is not simply an internecine war between drug traffickers. Targeted victims of the conflict have included police officers, journalists, peace activists, and migrant workers. The dead have also included civilians who were either misidentified or were simply in the wrong place at the wrong time. In all of these cases, the scope and lethality of these attacks are vastly enhanced by easy access to military-grade small arms.

At the level of federal policy, the United States has taken some action to address the problem by increasing the Mexican government’s access to eTrace, the ATF’s gun-tracking system, and expanding surveillance of southbound cargoes for illicit guns. But these are fundamentally half-measures. Efforts to fortify the rugged, 2000-mile long border have failed on both cost and effectiveness grounds – and the measures to stop illicit northwards traffic are considerably more intense than those designed to stop contraband moving in the opposite direction. American politicians speak of “securing the border,” but the odds that doing so could appreciably impact illicit trade are extremely long.

In order to help counter the appalling slaughter on its southern border, the United States needs to make it much more difficult for drug traffickers to arm themselves in American civilian gun stores.

The NRA steps in
But every new gun control proposal has been met with a firestorm of criticism from gun owners’ groups – most importantly the National Rifle Association (NRA). The NRA’s five million-strong membership roll and its strong financial links with major firearms manufacturers give it a deep war chest and unmatched political clout in American domestic gun politics, and in recent decades its opposition to gun control has evolved from nuanced opposition to outright hostility. In recent years, having successfully lobbied for the expansion of concealed-carry laws and against any new federal gun control measures, the NRA has also moved into the international sphere by opposing the UN Arms Trade treaty and attempting to globalise a civilian right to bear arms.

The federal judiciary has also recently proven hostile to gun control measures, overturning some of the more restrictive statutes, such as Washington, DC’s handgun ban. With gun control stalled at the federal level, the border states could in theory pass their own measures with some effect.  But in practice, Texas, Arizona and New Mexico all have extremely lenient gun laws and have not evinced any willingness to strengthen them.

Coming to terms with the issue requires not only a different legal framework, but also a public debate that acknowledges the central role of American-sourced weapons in the bloodshed in Mexico. Unfortunately, to the extent that there has been public conversation around the topic, it has been a politically-charged debate around the ATF’s botched “Fast and Furious” gun-tracking operation, rather than the broader context of American firearms in Mexican violence.

At its heart, that context is quite simple. Drugs are shipped north through Mexico to be sold in America, and guns bought with the profits flow south.

Those guns kill thousands of Mexicans every year, and will continue to do so until significant action is taken to limit their availability. In that sense, the American gun control debate is not simply a domestic policy issue, but also an international and human security problem.

That it has not taken on those dimensions is a lamentable failure which must be addressed urgently.