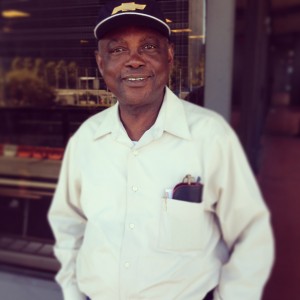 AOAV: What is your main job in this role?

Baffour Amoa: Primarily to make sure that, in West Africa, we fight against gun violence and the proliferation of small arms and light weapons. We work very strongly with the Economic Community of West African States (ECOWAS) so that policies are implemented. We have also offered ECOWAS a draft convention on small arms and light weapons, which was adopted in 2005, came into force 2006 and in 2009 – and it’s working.

AOAV: What does the convention say?

BA: The convention looks at definitions of small arms and light weapons, it looks at manufacture and transfers, and looks for exemptions for states and institutional arrangements.

AOAV: What does it do in practical terms – does it help to reduce the flow of illicit weapons across borders, or does it focus mainly on states and their purchasing of weapons?

BA: Both. States can no longer import weapons on their own, it must have an ECOWAS exemption certificate, so proliferation is therefore minimised, which is good. This convention is also used as standard for regulations across countries, so now you have the same standard of arms control in all West African countries.

AOAV: What is the problem with small arms in West Africa?

BA: The problem is huge. We have a lot of instability caused by illicit weapons, for example when we have tribal differences, political differences or election challenges, people tend to use these weapons. The bottom line is that armed violence is growing.

AOAV: These guns, are they mainly made in West Africa or are they imported from other regions?

BA: Both. According to the police, locally made guns make up almost 90% of all crime cases. Additionally, guns used by the police force and the army in conflict areas can sometimes find their way into the illicit market.

AOAV: Throughout West Africa as a whole, which counties have the biggest problem when it comes to gun violence?

AOAV: So pretty much every country in West Africa has a problem?

AOAV: In terms of the impact on lives that this has, is it considerable?

BA: It is considerable. People tend to move in numbers if an area becomes too insecure. For example, in Nigeria the Boko Haram attacks have made people think twice about where they stay, especially in the areas where the groups are operating very violently. In Liberia, the war has caused many Liberians to settle in Ghana and other countries in West Africa, and the same goes for Sierra Leoneans.

When gun violence becomes impossible people are not able to stay in their natural habitat any more.

AOAV: Have you ever personally been a victim of a gun violence?

BA: Yes. During the 1990’s I frequently visited Sierra Leone and Liberia during the war for work. For three days in Monrovia I didn’t even blink an eye because guns were over my head all night in my hotel. I had to actually be smuggled out of the county.

AOAV: You were very fearful for your life and you saw others being taken?

BA: That is why my passion has not waned. We have to work until there is peace, because gun violence is terrible.

AOAV: What are the biggest challenges facing your organisation today?

BA: The biggest challenge we face of course is resources. The magnitude of the problem is huge, but how do we convince donors to invest in these areas of building everlasting peace and getting guns out of the streets? That’s the challenge.

AOAV: What are the most practical way of doing that do you believe?

BA: We have been increasing members across West Africa so that more people appreciate the issue and realise the little ways they can help. We have been making sure we work with the media to disseminate important messages that discourage the use of guns. We have also been increasing the relationship between civil society and police, so that community youth can report on weapons they find, things like that. I think we’re making inroads.

AOAV: Who is profiting from all of this gun violence?

BA: At the end of the day, producers and manufactures. The middle men profit particularly- the brokers.

AOAV: And these brokers, where do they get their international guns from predominantly?

BA: When the Cold War ended a great number of weapons moved from the Eastern European countries to Africa and to many other parts of the world. Many of these guns are being recycled. That is where the problem is.

AOAV: So you’re seeing many AK-47s and other Russian made weapons proliferating in West Africa?

BA: Absolutely. And these are the easiest weapons you can acquire on the streets for the very minimum price.

AOAV: What sort of price?

AOAV: So a criminal with a little bit of money in his pocket could potentially acquire a weapon and cause significant harm?

AOAV: Are you optimistic for the future?

BA: I am very optimistic for the future. You can see that thanks to the work we’ve done in West Africa, we are not in the news as much as a highly destabilised region.

AOAV: AOAV works in Sierra Leone, Western Sahara, Burundi, and Liberia. In Sierra Leone, we work with blacksmiths in trying to reduce the making of local guns. Do you think there could be more collaboration with Western and European NGOs, or do you think this is an issue that Africa has to address on its own?

BA: The International Action Network on Small Arms is a global coalition of victims, survivors and sympathisers. In that respect everyone is welcome to help fight this menace. We have actually been advocating alternative livelihoods for blacksmiths so that we can deter them from gun making and encourage them to use their skills in productive areas of the economy.

If anybody would like to partner with us to push this agenda, we are open to collaborate.