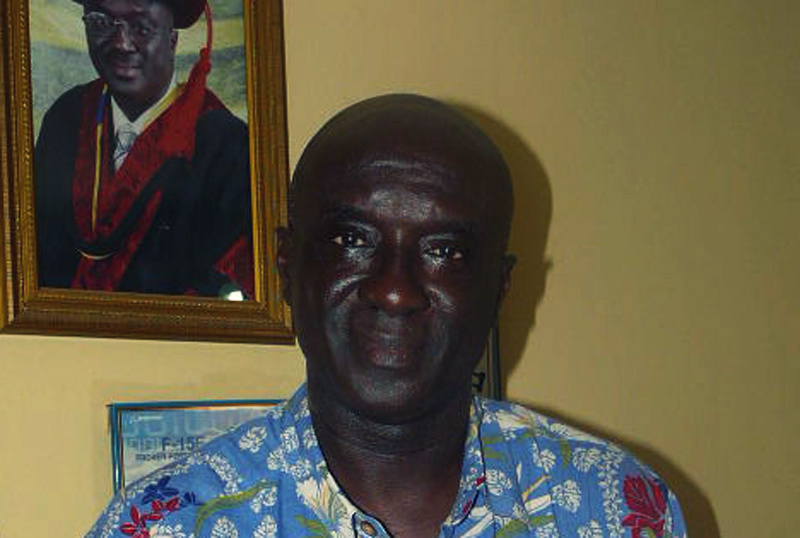 Dr Yakubu cleared his first mine in former Yugoslavia: using only his bare hands.

AOAV: What is Deminers Concept?


Jack Bala Yakubu: Deminers Concept Nigeria Ltd clears and destructs relics of war that were launched during the Nigerian Civil War between 1967 and 1970. We remove dangerous ordnance such as mortar bombs, artillery bombs, grenades, hand grenades and rifle grenades that failed to explode at the time. Today they detonate on their own, either due to the heat of the land or due to actions of people on the land. My company is clearing all these dangerous items from the South-East, South-South, and parts of the central states of Nigeria. The contract was signed in December 2008, and we started working in January 2009.

AOAV: What is required for you to start working in a state? How do you proceed once the programme is in place?


JBY: I was writing a paper on the Nigerian Civil War, when I discovered that weapons were used excessively in some regions – excessively and unnecessarily. I also realised that some of the places that were liberated very early in the war, never even knew that there was a war in Nigeria.

We conducted a technical survey of the areas that were suspected to contain landmines and explosive remnants of war. We physically went on the ground, interacted with people and followed the history of military manoeuvres. We checked where bombs were left and the gun positions that were used by both the Biafran and the Nigerian side.

This is how we discovered that over 240,000km2 – almost a quarter of Nigeria’s total area – was contaminated. We were able to come up with close to 500 positions where the military had left unexploded ordnance. The complicated issue with the Nigerian Civil War is that the Biafran side had limited conventional military hardware and software, so they had to manufacture weapons locally.

We were confronted with a lot of these IEDs – improvised explosive devices. Some were made to substitute landmines, which were just as efficient as conventional ones. We found a lot of these, we found anti-personnel mines, we found Russian made anti-personnel mines. We also found locally manufactured mines that contained bolts, nuts, stones, pebbles, nails and metal parts and so on forced into the tube, and ignited by some kind of power source, like batteries. We had to be very careful.

I presented the results from this technical survey to the federal government and warned them about the issue. Then came the Mine Ban Treaty, which made it mandatory for signatory countries to clear them. So our first contract was to clear landmines.

I worked with 72 deminers, and about 150 non-demining staff that handled administrative work, including drivers, cooks etc. In all these places we had about 24 vehicles.

AOAV: How did you get into demining in the first place?

JBY: My first demining experience was as a military officer in what used to be Yugoslavia. I had to demine the Sisak crossing point, in the former Serbian territory in Croatia. The mines blocked our only access to logistics – and our only access to food.

I decided that we have to demine this place. I sought the permission of the Croatian authorities, but they rejected us. So we just went there and put up a UN flag. This was my first experience trying to remove an anti-tank mine. I removed it by hand.

We used a rifle to shoot at anti-personnel mines, which would make them explode. I would stay 200 metres away, undercover in a trench, and fired. This was our very first crude way of demining, before the Dutch Battalion trained us in the actual way of doing it.

That experience helped us in Nigeria. But the problem with demining is a lack of understanding. We found that our government and the ministry who gave us the job didn’t understand the work we were doing. 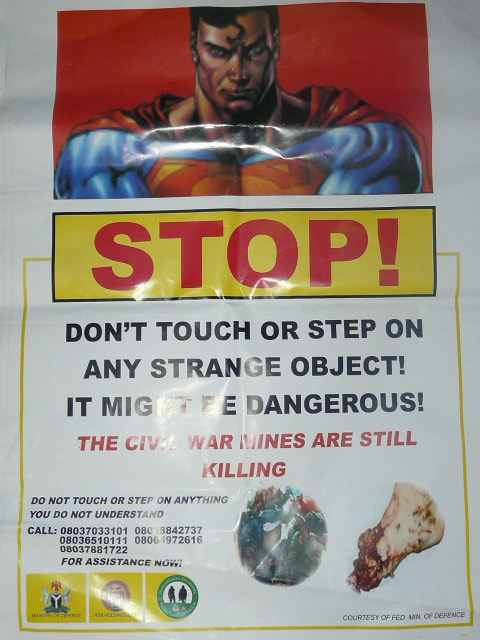 STOP! One of six million posters trying to educate Nigerian citizens about the danger of unexploded ordnance.

The people living with these explosive devices also do not understand why they can’t live with the devices. Some even felt comfortable living with them. We made posters in various languages and sent teams for mine risk education and awareness campaigns into the affected locations.

It pains us that the government stopped our work now because of some administrative reasons on their side. I expected that in two years’ time we would have finished the clearing. But until now, the government still hasn’t resolved the issue.

Based on the military manoeuvres known to us the areas left to clear could be densely populated by explosive remnants of war. I estimate that there are 40,000 to 60,000 more bombs left.

AVOV: How much has been cleared already?

AVOV: So landmines are actually the smallest portion?

JBY: Yes, at the end of the war, the Nigerian government used cows to trigger mines in known mine fields…

AOAV: The Mine Ban Treaty that was both signed and ratified by Nigeria also makes provisions for victim assistance. From your experience, is Nigeria fulfilling its commitments?

JBY: Victim assistance is a big problem. The issue is that some people in government really have not concerned the Mine Ban Treaty very well. Our government is willing to help but there is a barrier – a minefield – between the government, the Ministry of Defence in particular, and us.

The Minister of Defence has laid this minefield, and we struggle to cross it to tell the President that victim assistance is his responsibility. That is why as soon as we registered in 2009, we not only started to count the mine victims but we also helped them. We bought clothes, we shared rice and we gave them a lot of things we could afford. But nothing has been done from the Federal side.

But the Nigerian president seems to be very interested in the issue now. He has directed that my company should return to work immediately and that we should look into recommendations for the victim assistance programme.

AVOV: What are your greatest challenges?

JBY: Our greatest challenge was the ignorance of the people in the contaminated area. Most of them had never seen a bomb. They would see them in their farms and use them to crack kernels. Some of them would take them home and use them as decoration without knowing that these are explosive remnants of war. Women would use them to make a fire port to prepare food – until, one day, they explode.

Another problem was that a lot of people wanted us to pay them to remove the bombs. They assumed we were going to use or sell the bombs. Some of them also felt that we were trespassing which is why we had to come with law enforcement agents. Not only did we have to face a difficult job clearing the land, we also had to educate the people, we had to buy them drinks and presents and had to go via traditional rules and village heads to explain why we were here. In some areas we were even shot at by militants.

But our principle challenge overshadowing our entire work was all the lack of understanding from the Ministry of Defence.

AOAV: Which is why the project is on hold?

JBY: Yes, which is why the project is on hold.