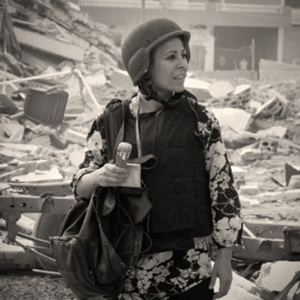 Karen Marón is an Argentine freelance war correspondent who specializes in armed conflict and international politics in the Middle East, Africa and Latin America. Marón gained international recognition for her work during the military occupation of Iraq, where she reported on the torture being inflicted at Abu Ghraib, and interviewed various resistance groups. She was also the longest staying Latin American journalist during the occupation. In Latin America, she has interviewed majors of the FARC in Colombia, and members of Sendero Luminoso in Peru. Since 2011, Marón has covered the rebellion in Libya and Egypt, and in 2012 was at the heart of the Syrian conflict. She is a member of honor of the World Peace Summit and the Dart Center for Journalism and Trauma, based at the University of Washington.