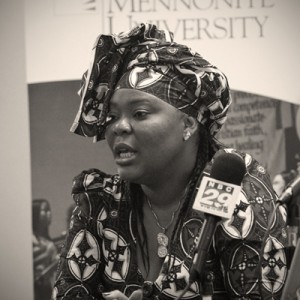 Leymah Gbowee is a Liberian peace activist who was awarded the Nobel Peace Prize in 2011 along with Ellen Johnson Sirleaf and Tawakkul Karman. Gbowee and other women lead a peace movement in Liberia which worked across religious and ethnic lines. After initially training as a counsellor for people traumatised by war, Gbowee gathered thousands of women together in Monrovia, distributing flyers saying “We are tired! We are tired of our children being killed! We are tired of being raped! Women, wake up- you have a voice in the peace process!” The movement organised non-violent demonstrations and sit-ins in a protest against President Charles Taylor. During peace negotiations Gbowee and other protestors blocked the main entrance to the meeting hall for several days. This high profile protest marked the beginning of the end of the war. The Accra Comprehensive Peace agreements were signed weeks later. Gbowee is currently executive director of the Women Peace and Security Network Africa.