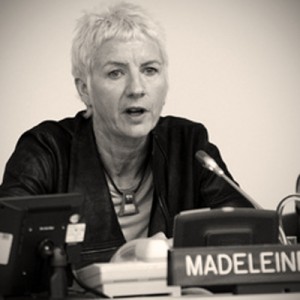 The Women’s International League for Peace and Freedom (WILPF) was started in 1915 by 1,200 women who came together to study and eliminate the causes of war. Since then, two members have won the Nobel peace prize and the organisation has worked on issues of human rights, disarmament and the impact of conflict on women. Madeleine Rees has been Secretary-General since 2010, prior to this role she served as the Head of the Women’s Rights and Gender Unit for the UN Office of the High Commissioner for Human Rights.