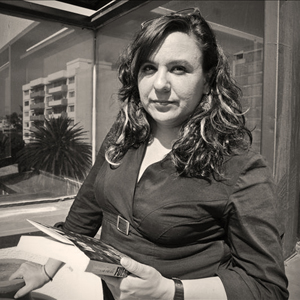 Marcela Turati is an investigative journalist at Mexican news magazine Proceso. In 2007, she co-founded journalism organisation Periodistas de a Pie [Journalists on Foot], an initiative to connect and support journalists covering high-risk issues such poverty, civic participation and human rights.

Turati focuses on violence, human rights and the drug trade within her native Mexico, and has long worked to represent those who lack access to political power and the media. In 2010, she published her book Fuego Cruzado: Las Victimas Atrapadas en la Guerra del Narco [Crossfire: Victims Trapped in the Narco-War], about the impact of drug violence on Mexican society.

She has also collaborated on several projects which document the experience of victims amidst the violence, and also about Mexican resistance. In 2013, the Nieman Fellows at Harvard University selected Turati as the recipient of the Louis M. Lyons Award for Conscience and Integrity in Journalism.