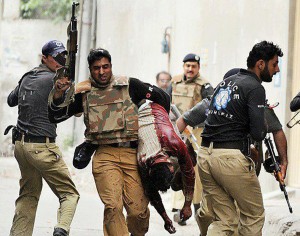 Two suicide bombs rip through a market place in the North West of Pakistan.  It hits just as people are buying groceries before the start of their fast in the holy month of Ramadhan. This was just a few days ago. And, at the time of writing, the death toll stands at 57.

It’s just one of a series of bloody attacks that have been unleashed in recent months, all targeting the minority Shia community in Pakistan.

This year alone suicide bombings have claimed a reported 482 lives.  The majority of attacks have targeted the military and police, but sectarian attacks are also growing in number.  The suicide bombers target market places, mosques, and shrines.

Suicide bombings, as a tactic in the Af-Pak region, were initially used against occupational forces in Afghanistan.  However, since Pakistan’s involvement in the war on terror, suicide attacks have moved on to target both the Pakistani establishment and fellow Muslims.

Why has this happened?

Well, to understand the motivations behind such attacks, it is important to look at the different factors that affect Pakistani society and would-be suicide bombers, as well as the tactics used by those who recruit them.

Poverty and education
Poverty in Pakistan poses a massive challenge to families wishing to educate their children. One third of children attend religious schools known as madrassas.  The schools are funded by philanthropy and provide basic literacy and the foundation of a religious education.  Many madrassas are benign religious centres, training up the next generation of Muslim scholars.  But a minority of them have become the breeding grounds for militants.  They indoctrinate boys to believe in the righteousness of fighting jihad in neighbouring Afghanistan, in the religious justification for killing members of the Pakistani military and the rationale for carrying out sectarian attacks on Pakistani soil.

In a country where the literacy rate is one of the lowest in the world and where the government previously dedicated only 2% of its budget towards education (increased to 7% this year under the new government), families sometimes have no other choice but to send their children to these madrassas.

In turn, the madrassas often provide food and clothing, a determining factor when parents are barely struggling.

The threat of all madrassas, however, should not be overstated.  To suggest that madrassas per-se cause extremism or suicide bombings is inaccurate.  Madrassas have existed throughout the Muslim world for centuries, and suicide bombings, in Pakistan, are a relatively recent phenomena.  The first suicide bombing in Pakistan was carried out by an Egyptian that targeted the Egyptian embassy in 1995.

In theory, a madrassa education should produce a well rounded, tolerant, and educated individual.  Traditionally madrassas have taught science, philosophy, languages, maths and a variety of other subjects.

But at the same time, it is clear something has gone wrong in some of the madrassas in Pakistan.

Foreign influence and politics
So what went wrong? Well, there was a shift to teaching armed violence as a means to a religious end in madrasses -= a shift that can be traced back to the military coup of General Zia in 1977, and the influx of Saudi funding into the country.  The trouble with all of this was that this funding came with strings attached. It was given on the condition that the literalist, legalistic and austere Saudi version of Wahabi Islam was taught.

What did this mean?  Wahabism takes a literalistic view of religion and concentrates largely on the austere.  Its ultra conservative teachings reject Islamic laws and practices that developed after the third generation of Mohamed.

The Saudis funding was a reaction to the Islamic revolution in neighbouring Iran.  The Saudis saw the rise of the Shia inspired revolution as a threat, and so they began to fund groups that would counteract this.  In Pakistan, the group Sipah-e-Sahaba, for instance, was established in part to counter any possibility of the rise of Shia Islam in Pakistan.  The group considers Shias as non-Muslims and would like the Pakistani government to declare them as such.

Saudi financing and introduced schools of religious thought are not the only influencers of extremism. The war on terror has also clearly radicalised a great deal of people in Pakistan.  There is no denying the deep levels of anti-American and anti-Western feeling in the country.  And since the military dictator, General Pervez Musharraf, joined the War on Terror many groups that were formerly concentrating on the issue of Kashmir or Afghanistan turned their guns on the Pakistani state.

This anti-Western belief has certainly fuelled some men’s impulse to kill themselves in suicide attacks.

The narrative fed to would-be suicide bombers runs like this: their group or organisation is fighting for Islam.  There is a war against Islam and the West is waging this war.  Pakistan is allied with the West and therefore is an enemy of Islam.  The Pakistani establishment is not ‘Islamic’ or implementing shariah.  It is justifiable to kill the enemies of Islam.  It is justifiable to kill the Pakistani military and police.  So sacrificing your life for Islam will mean you are a martyr and will have all your sins forgiven and have a high rank in heaven.  Suicide bombing is just a tool in this fight against the enemies of Islam.  You will be rewarded in the afterlife for your sacrifice.

Religious interpretations
The majority of Pakistan’s Muslims come from the Braelvi tradition of Sunni Islam. It has its roots in Sufi doctrine, generally seen as more tolerant. Most suicide attacks carried out in Pakistan are by those that adhere to the Deobandi school of thought.  This school originates in India and their adherents tend to have a stricter approach to Islam.  The Deobandis are generally seen to be ‘peaceful’, but the emergence of groups like the Pakistani Taliban, has exposed a hard-line element within this Sunni school.

The suicide bomber is taught a literalistic and narrow Deobandi or Wahabi interpretation of Islam.  In this interpretation there is no room for difference of opinions.  Those that visit shrines, seek intercession through saints, or carry out any other actions that militant groups deem as ‘shirk’ – associating partners with God, and therefore heretical – are labelled as non-Muslims.  This makes them legitimate targets. And, reflecting this, there have been several attacks against Sufi shrines – like those on Datta Darbar in Lahore and the shrine of Abdullah Shah Ghazi in Karachi.

The targeting of Shias, a religious sect that constitute approximately 15% of the Pakistani population, pre-dates both 9/11 and Musharraf’s role in the American war on terror.  Much of the sectarian tension emerged following General Zia’s Islamisation which many Shias resisted as they saw as really a “Sunnification” of Pakistan.

Two of the most prominent groups that have targeted the Shia community are Sipah-e-Sahaba and its offshoot Lashkar-e-Jangvi who seek to establish Pakistan as an orthodox Sunni Islamic State. Human Rights Watch have criticised the Pakistani government’s failure to protect Shia communities with security forces turning a blind eye to attacks.

The majority of these attacks have taken place in the Khyber Pakhtunkhwa region.  The group that carried out the 27 July attack in a market place are called Ansar ul Mujahideen.   Their spokesperson told media that they were carried out in response to drone attacks and the suicide bombing was in revenge for the ‘brutalities of Shias against Sunni Muslims in Syria and Iraq’.

Given that a very high percentage of people killed in such attacks are civilians, there is a deep and often under-expressed philosophical strand of thought that allows militants to justify the devastating impact on ‘innocents’ that their attacks carry out.

According to militant groups, civilians that die, if they are Muslim, will go to heaven.  Therefore they are, in a way, doing those who die a favour of sorts.  There is also a wider believe that the civilian’s untimely death needs to be put into a wider context: the Pakistani establishment must be stopped, therefore sacrificing lives is acceptable.

Conclusion
When looking at the motivation of suicide bombers we cannot ignore the wider politics of what is taking place in the Muslim world.  Whether it is the war on terror or the civil war in Syria, extremist groups will use these issues as propaganda to recruit and incite murder in Pakistan.

The Pakistani authorities have recognised the psychological indoctrination that takes place and have started to set-up de-indoctrination centres that use psychologists to re-educate the boys.

Politics, poverty and a twisted interpretation of religious ideology drives suicide bombings in Pakistan.  Regardless of the targets, the above three factors will always be found in a would-be suicide bomber.  Some problems are out of normal peoples’ control; drone strikes, the war in Afghanistan, and the demonization of Muslims globally.

But poverty and education can be remedied by the state, and reducing Pakistan’s burden in these two areas would be an important step to reducing suicide attacks.

What is required is the political will to do this – to invest in schools and the economy – and in so doing to reach out to the most vulnerable in the country.  Only then will the allure of suicide bombing as a legitimate form or protest be properly challenged.