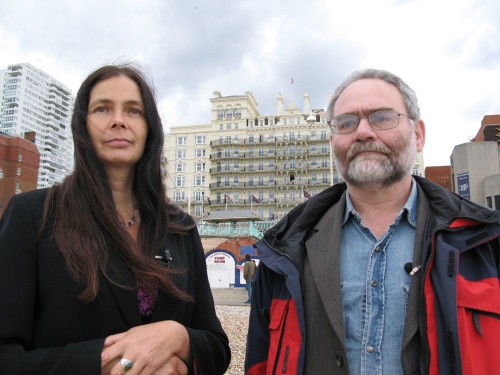 Jo Berry and Patrick Magee outside the Grand Hotel in Brighton

Last night Patrick Magee, a former member of the Provisional IRA, and Jo Berry, the daughter of a Conservative MP killed in the 1981 Brighton hotel bombing, shared a platform at an event organised by the Encompass Trust to denounce violence and to call for better understanding of its victims and perpetrators.

Magee was responsible for conspiring to plant sixteen bombs in cities across the UK during the 1980s, including the one which killed Berry’s father Antony along with four other Conservative Party members. He faced eight life sentences in 1986 but was released along with other political prisoners as part of the Good Friday Agreement.

Berry told how at their first meeting in 2000, Magee initially spoke for over an hour about his political motivations for joining the IRA and carrying out the bombing. At some point he felt the inadequacy of the political talk and asked to hear Berry’s anger and her rage. After listening to her story and her memories of her father he ended the meeting by saying ‘I’m sorry I killed your father.’

Since then Berry and Magee have met over a hundred times and spoken to audiences all over the world, bringing their experiences and messages to people affected by violence around the world. In 2011 they were on a panel with Desmond Tutu speaking at the Peace One Day conference.

The important breakthrough in their relationship came when Magee began to understand Berry’s father as a human. At the time of the attack he was a cipher for the injustices and violence inflicted by the Conservative Party. After speaking to his daughter Magee realised that ‘if I had known that man I couldn’t have hurt him’.

This message was echoed by Berry, who claimed that ‘when Pat placed that bomb he wasn’t seeing human beings, it was just a strategy, a device’.

This need to put the effects of violence in relatable human terms is an area which AOAV is constantly engaging in.

We are currently working on research that will show the effects of IED attacks in Pakistan.  Like the bombing of the Brighton Grand Hotel. We want to address the issue of IEDs in human terms that are universal. Not just a body count reported in the media, but a sense of what the loss of a loved one means to a family. What it means to suffer lasting psychological trauma. What it means to be too scared to let your children play outside. What it means to lose your only bread winner.

In particular the research looks at what the long term effects are on people. These are not harms which can be overcome in just a few months after the blast. They have a much longer lasting impact.

It is increasingly necessary to convey these effects in situations where casualties from IED attacks become an everyday occurrence. In a recent trip to Pakistan AOAV was told: ‘people get immune to the violence, it has to be 50 or 60 people killed before people even bat an eyelid.’

Our forthcoming work will seek to fight this normalisation of tragedy.