Data and information on armed violence are increasingly being presented in a range of visually striking and engaging ways. But are these visualisation programmes just glossy and insubstantial toys or do they offer something more?

The Mapping Arms Data Visualization App was developed by the Peace Research Institute Oslo and the Igarapé Institute.  Based on a tool originally created with Google Ideas, it works as a fully interactive globe showing the flow of ammunition and small arms around the world. Finding out how much money Australia spent on ammunition imports in 2001 or who is the largest supplier of arms to Thailand is simply a matter of moving sliders and selecting from drop-down menus. The project was built using the open source WebGL Globe– a technology that allows accelerated graphic processing in web browsers like Chrome.

The strength of the graphic is that within the first few moments it is possible to identify which countries are the leading exporters of small arms. It also vividly illustrates where those weapons end up.

It is undeniably a fun tool to play with. But the app also starkly highlights particularly interesting trends – such as how imports to Sudan from Iran increased dramatically in 2003, the year in which the Darfur genocide began.

However, deeper analysis is probably best suited to more traditional tools like spreadsheets and databases. Anyone delving deeper into the data would soon be frustrated by having to spin the globe every time they moved to a new country.

To this end, this site might be more of a publicity or advocacy tool and a way of engaging the media and general public who would otherwise not be interested in arms exports data.

Indeed, the visualisation was nominated for a “Webby” award and was featured in Wired and Forbes magazines.

The publicity that the site received and the clarity which the visualization offered has helped to shine a light into the murky world of the arms trade. Whether it is offering a new way of understanding it is debatable.

Another shadowy violent practice that has been illuminated by bright visuals and graphics is Pitch Interactive’s presentation of drone strikes, “Out of Sight. Out of Mind.”

Taking data from the Bureau of Investigative Journalism and the New America Foundation, it uses lines and dashes to tell the story of how US drone strikes have been used in Pakistan and the casualties they have caused. The visualisation has a clear chronological narrative, showing how the number of strikes and casualties increased when President Obama came to office and how they have declined in 2013.

By clicking on one of the strikes it is possible to move from the big picture right down to the details of a specific incident, as details of the number of people killed and the location of each strike are revealed. It was created in HTML5 and JavaScript and was inspired by a similar graphic showing U.S gun deaths. 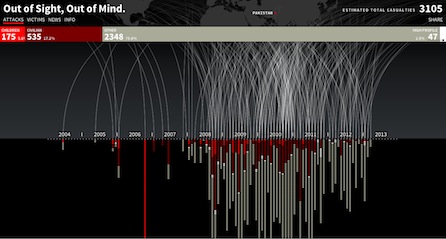 Wesley Grubbs at Pitch Interactive said that he wanted people to pause for a moment and say ‘wow I’ve never seen this in that light before.’  And to some degree, he is right.  The whole narrative of the covert war is presented in under a minute and key issues like the disputed identity of casualties can be seen immediately. The site is also live and updated as details of new strikes emerge.

The strength of both of these visualisations is that they package issues in a way which makes them appear new and engaging. In reality, the facts about both the arms trade and the covert drone war were well established before 2013. But it may be necessary to constantly repackage information and causes to stay ahead of the short attention span which is a feature of the modern age.

Research has shown that novelty is a powerful means of transmitting information through a process known as the reticular activating system. This system acts as a filter to all incoming stimuli and determines which require the attention of the conscious. Novel experiences are more effective at capturing our attention.

The beautiful design of these data visualisations is an elegant tool for the task of constantly recapturing the public’s attention.

It is less clear what the impact of such visualisations is beyond their novelty, though.

To find the right way you need a good map

Visualising data in new ways makes it easier to spot patterns and causes which it would be impossible to see with just numbers on a page.

Small Arms Survey have provided an excellent analysis of how digital mapping of data on armed violence can help limited resources be used more effectively and amplify their impact. 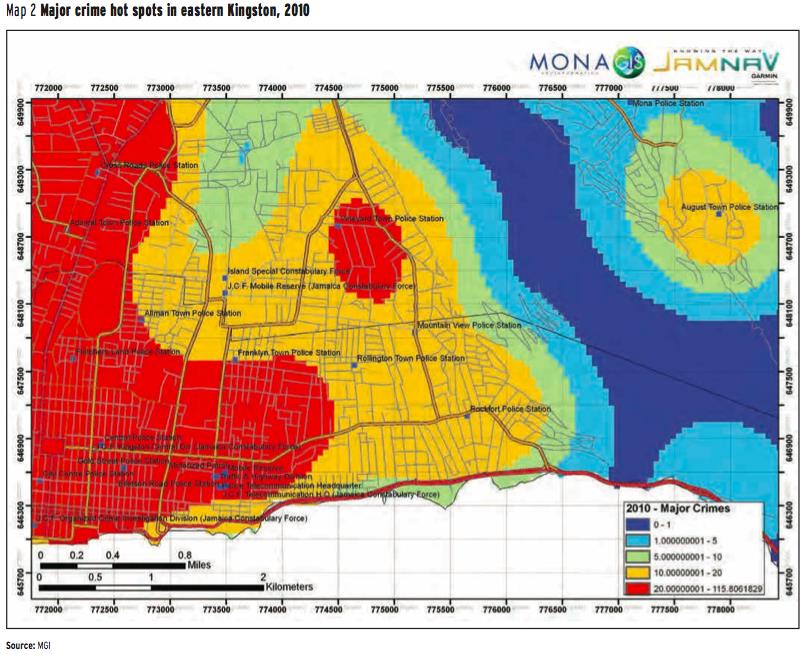 Looking at the particular example of Jamaica, they identified a number of occasions where Global Positioning Systems (GPS) and Geographic Information Systems (GIS)  are used to help develop targeted interventions which reduce armed violence.

The practice of mapping violence has its roots in public health strategies of mapping disease outbreaks. In 2002, Jamaica’s Ministry of Health began to use GIS technology to process crime data as part of its Healthy Lifestyle Project. Data was collected from a whole range of sources including the police, hospitals and local government offices.

By analysing the information on a map, it was possible to spot patterns which were being missed. It has also enabled crime figures to be modelled against resources and infrastructure like police stations, schools, street lights and community centres.

Incidents of violent crime can also be overlaid against maps showing things like education levels, employment and poverty.

One of the findings in Jamaica was that some police stations were responding to crimes that were committed closer to other stations. This pattern suggests that the general public were not always aware of their nearest station or that some stations were overstretched and turning people away.

This kind of modelling can also assist with monitoring how effective new policies are and determining whether they are solving a problem or simply pushing it to another neighbourhood.

Mapping allows data to be viewed in new ways so that patterns can be more easily identified. It also ties the figures to reality. These are no longer numbers in a spread sheet; it’s now a residential area in Kingston where hundreds of people have their homes.

Maps on their own do little, though.

Such mapping and modelling is only of use if people actually pay attention to the evidence.

In Sudan, with such a wide range of security and socio-economic problems, the UNDP developed a tool to help identify and prioritise interventions.

The Crisis and Recovery Mapping and Analysis Project, developed in 2007, works with UN agencies, NGOs and state governments to produce a kind of digital atlas of existing data.

There are now more than 200 different datasets provided by different UN agencies, including school data from UNICEF, the location of health centres from the WHO, and patterns of IDP returns from the International Organisation for Migration.

State governments then consult with local leaders to work out what the needs and risks of the local population are. This most important layer of data can then be overlaid onto the detailed map.

The utility of such mapping appears obvious, but some people are still coming to terms with it. In an interview with AOAV, Maximo Halty, Chief Technical Advisor to the Project, complained that the work was not being recognised by the UN:

“The UN has yet to adopt evidence-based planning as an actual planning mode, not just a slogan. Many decision-makers in the system tend to see facts and evidence as something that conditions how they do their planning, and don’t like that limitation. They prefer to plan based on accepted standard practice.”

Visualising information in new ways can open up new solutions to old problems but convincing large organisations and governments to change direction is like turning an oil tanker.

However, if the data is accurate and clearly presents a compelling case for change, it is an argument that will eventually be won.

Counting the cost of armed violence is essential but the work does not end there. Information must carefully dissected and repackaged. This will help stimulate original solutions as well as continually capturing public interest.