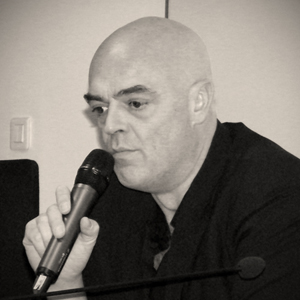 Remy Ourdan is a French journalist who is a deputy editor of newspaper Le Monde. In 1992 Ourdan began as a reporter in Sarajevo, and covered the siege of Sarajevo and the Bosnian war for four years. In the Balkans, he also covered the Kosovo war and Serbia after the fall of Slobodan Milosevic.

In Africa, Ourdan covered the Rwandan genocide, the conflicts in the Great Lakes region and in Congo, the Eritrean-Ethiopian war and the Sierra Leone civil war. Following the September 11 attacks, Ourdan reported on the American wars in Afghanistan and in Iraq, and was Baghdad correspondent for two years in 2003. He has also covered the Arab Spring in Egypt and Libya.

In 2012, Ourdan organized a mass reunion of journalists in Sarajevo, called Sarajevo 2012, to mark the 20th anniversary of the war in Bosnia. That same year, he also founded WARM, an international foundation working on the world’s contemporary conflicts, based in Sarajevo. Ourdan has won the Bayeux Award for War Correspondents twice, once in 2000for a story on the war in Sierra Leone  which appeared in Le Monde in 1999, and again in 2012 for a story on the Mexican drug war in Ciudad Juarez in 2012.