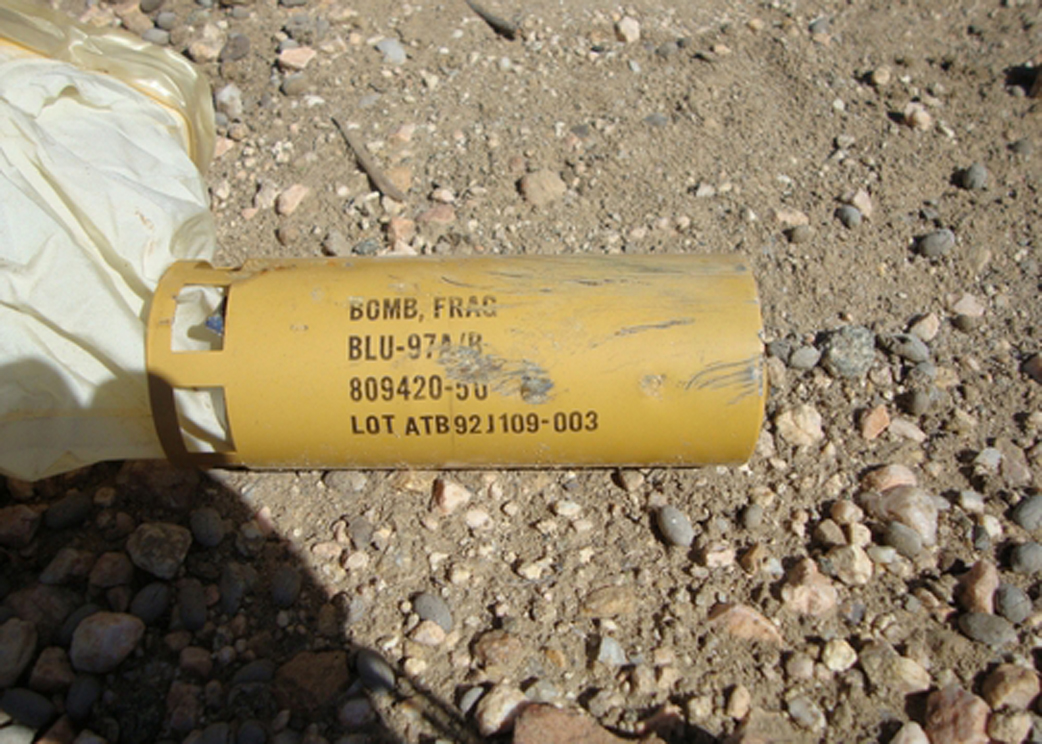 The Cluster Munition Coalition (CMC), of which AOAV is a member, urges all 112 countries that have joined the Convention on Cluster Munitions to help ensure that the weapons are not used by the United States in any military action in Syria.

“Cluster munitions used by the Syrian regime have already caused numerous civilian casualties as they have done in every other conflict in which they have been used,” said Sarah Blakemore, director of the Cluster Munition Coalition (CMC). “It makes absolutely no sense to use banned weapons to retaliate for the use of another banned weapon.”

According to the New York Times, a range of US officials have said that, for now, the Syria strike plans are focused on using solely sea-launched Tomahawk cruise missiles. TLAM cruise missiles can carry a variety of warheads and the Delta model has a weapons payload of 166 BLU-97 bomblets.

The last reported US use of a cluster munition was in Yemen on 17 December 2009, when one or more TLAM-D cruise missiles loaded with BLU-97 bomblets struck the hamlet of al-Majala in southern Abyan province. The strike killed at least 41 civilians and at least four more civilians were killed and 13 wounded by unexploded bomblets after the attack. Four years on, the site of the attack remains contaminated by cluster munition remnants. The US has refused to confirm or deny the attack.

The United States also used Tomahawk cruise missiles with BLU-97 bomblets during strikes in Iraq in 1991 and 2003, in Serbia in 1999, and in Afghanistan and Sudan in August 1998.

“We call on all states that have joined the Convention on Cluster Munitions to urge the US to explicitly rule out any use of cluster munitions in military operations in Syria,” said Blakemore. “Any use of these weapons would contradict the purpose of the Convention on Cluster Munitions to prevent the suffering and casualties caused by cluster munitions.”

Neither the US nor Syria has joined the 2008 Convention on Cluster Munitions and the 1997 Mine Ban Treaty.  The US is party to the 1993 Chemical Weapons Convention, but Syria is not.

The CMC has repeatedly condemned Syria’s use of cluster munitions as have more than 100 states, including dozens outside the Convention on Cluster Munitions. In October 2012, the then-Permanent Representative of the US to the UN, Ambassador Susan Rice, said that cluster bomb use by Syrian government forces was an example of “atrocities” by the Syrian regime. On 15 May 2013 the United States voted for a UN General Assembly resolution that strongly condemned Syria’s use of cluster munitions.

The Convention on Cluster Munitions comprehensively prohibits the use, production, transfer, and stockpiling of cluster munitions. It also requires clearance of cluster munition remnants within 10 years and immediate access to assistance for victims of the weapons. A total of 112 countries have joined the convention, of which 83 have ratified or acceded, becoming States Parties fully bound by its provisions.