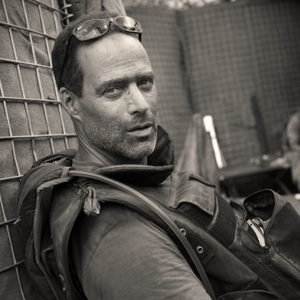 Sebastian Junger is an American journalist who has been an international reporter for over 20 years.

In 2000, his in-depth reporting on Afghanistan became the subject of the National Geographic documentary “Into the Forbidden Zone”, and his knowledge of the region made him a special correspondent for ABC News and Vanity Fair. He has also reported on the LURD siege of Monrovia in Liberia, human rights abuses in Sierra Leone, war crimes in Kosovo, hostage-taking in Kashmir and fighting in Afghanistan’s Korengal Valley.

He was a freelance radio correspondent during the war in Bosnia and subsequently moved into print journalism and documentary production. Junger has written several widely acclaimed books; The Perfect Storm, A Death in Belmont, Fire and War.

He has also made two films, Restrepo, which Junger made with photojournalist Tim Hetherington, and the recent Which way is the frontline from here?, a posthumous documentary about Hetherington, who was killed during the war in Libya.

Vanity Fair: Into the Valley of Death

The New York Times: A conversation with Sebastian Junger