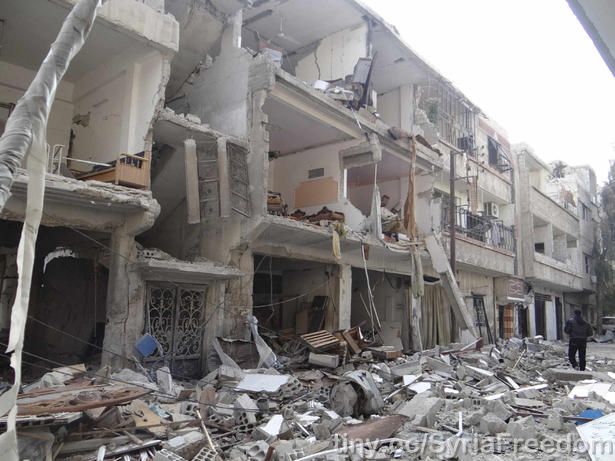 This week in London representatives of the disparate and fractured Syrian opposition are meeting as a prelude to a proposed peace conference in Geneva.

As parties to Syria’s conflict gear up for these crucial talks, a statement issued yesterday by a group of key countries who are driving the process has made clear the urgent need to halt the continuing use of explosive weapons in populated areas.

Variously styling themselves the ‘Friends of Syria’ or the ‘London 11’, the group includes states like the US, Saudi Arabia, and Turkey who have been backing the rebels against the Assad regime.

“We strongly condemn the regime’s escalating indiscriminate attacks, including use of sarin, SCUD missiles, air and artillery strikes and brutality on the ground”, their statement reads, calling on all parties to end their use of ‘heavy weapons.’

“The Syrian regime must end the siege of urban areas and the indiscriminate attacks against civilians, in particular through air bombardment and the use of ballistic missiles, cluster bombs and explosive barrels.”

The sarin attacks this summer that killed more than 1,000 people have been the understandable focus of much attention, but as AOAV has shown, it is explosive weapons that are doing the majority of the killing, maiming and destruction in the country.

The London 11 statement highlights just some of the most heinous explosive weapon types. Ballistic missiles, for example, are extraordinarily powerful weapons that are completely unguided and can land many metres from their targets. The Frog-7 is one such missile which has been launched in Syria. It is over nine metres tall and carries almost half a ton of high explosives.

The Frog-7 is one of Syria’s Dirty Dozen—twelve explosive weapons that are so powerful and so imprecise that their use in populated areas could never be justified because of the inevitable high costs for civilians. In just four missile strikes in Aleppo during February 2013 AOAV recorded more than 140 civilian deaths.

On a daily basis Syria’s civilians are being shelled in their beds, bombed in the streets, their lives literally blown apart. Even as the Geneva talks were announced, a massive suicide car bomb killed more than 30 people in Hama.

Few expect that the ‘Geneva II’ talks can achieve much in and of themselves.

But if they succeed in establishing any recognition among the conflict parties that explosive weapons should not and will not be used in this way anymore in Syria than that will be a step forward that will do much to alleviate the worst excess of the fighting in the country. That is why this statement matters and why it should be welcomed.