The market for firearms on the Internet, where buyers do not have to undergo background checks, is so vast that it is now clear that online sales are increasingly becoming a greater threat than the gun-show loophole in the United States. A new study by Third Way, a Washington think tank, has found that thousands of guns, including ‘assault weapons’, are now for sale online in the US.  It also found that many people are shopping online specifically to avoid background checks.The study focused on Armslist.com — a popular classified site that is similar to Craigslist.org.  It facilitates private sales of firearms and ammunition based on location.  The organisation focused on the listings in 10 states where senators voted against a background-check compromise to the US gun laws earlier this year.

The study had some disturbing findings.  On average there were over 15,000 guns for sale in those states at any one time, and of these over 5,000 of them were semi-automatic weapons. Nearly 2,000 ads were from prospective buyers asking to purchase specifically from private sellers, where no background checks are required.

“This is the biggest loophole in the background check system,” said Lanae Erickson Hatalsky, director of social policy and politics at Third Way, an organization that has been active in the gun-control movement for years.

Background checks — designed to keep guns out of the hands of convicted felons, domestic violence perpetrators or the severely mentally ill — are mandatory for gun sales at retail stores.  They are not mandatory, however at gun shows or for private sales, such as between neighbours, family members or individuals online. 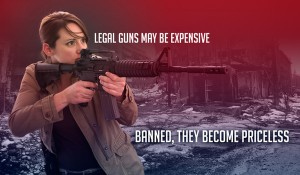 The National Rifle Association and other gun rights supporters have advocated against expanding the background check system because they believe doing so would not stop society’s most dangerous people from procuring weapons and eventually would lead to even stricter gun regulations, including a federal registry.

The NRA, in a policy statement on its Web site, notes that most firearms sales online go through a federally licensed firearms dealer in the home state of the buyer.

“The reality is that the Internet does not provide any legal opportunity to simply buy a firearm as if it were a pair of jeans,” the statement says.

But most firearms sales facilitated at classified sites including Armslist.org do not go through dealers because they are person-to-person transactions.  This means the buyers do not undergo background checks.

The NRA says in its statement that banning these sales is effectively prohibiting advertisements, “which is a direct attack on both the First and Second Amendments.”

Gun-control advocates have long prioritized closing the gun-show loophole, believing that is where people seeking to avoid background checks buy their firearms.

To some degree this tactic works. 17 states have closed the gun-show loophole in their states, and law enforcement officers have become savvy about scouring gun shows for people evading the law.

But online it is different.

The 1993 Brady Law, which instituted the background check system, exempts all private sales, including online. Gun-control advocates say the law’s authors could not have envisioned the proliferation of online gun sales.

It is clear that there needs to be a review of this law.  Whether there is a political will to do so is another matter.