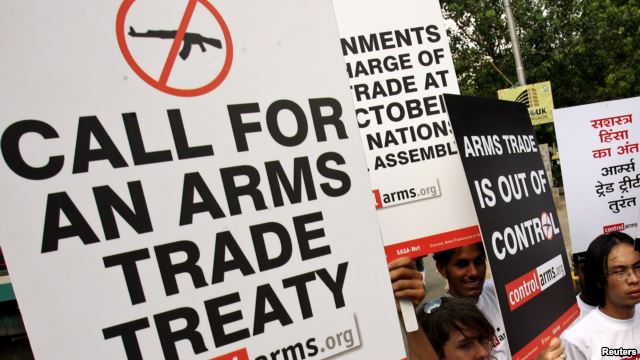 The Arms Trade Treaty: it’s a Jewish liberal conspiracy run by the Bilderberg group… or something.

The UN Arms Trade Treaty (ATT) is a sneaky way to put a stake in the heart of the 2nd Amendment. It is going to allow the United States government, acting under the auspices of the United Nations, to create a registry of legal gun owners and, in so doing, then allow government to confiscate their weapons. And that registry will be shared internationally, with little or no domestic oversight. And, most terrifyingly, the ATT will be signed into law by President Obama this month, while Congress is not in session, bypassing Congress and the will of the American people completely.

Nothing in the paragraph above is remotely true.

But to readers of a surprisingly large collection of websites and chain emails it is received wisdom:  the ATT will have some kind of negative impact on civilian gun ownership by Americans.

Unfortunately, this disinformation has a political effect: per the Constitution, the ATT does not have to pass the House of Representatives, but it does need a 2/3 majority in the Senate to be ratified. And 34 US Senators from both parties – enough to block the treaty – have already co-sponsored legislation to prevent the US from ratifying it.

The Arms Trade Treaty, in other words, already faces an uphill climb to ratification by the United States. And the myths and rumours that are abounding around it will only intensify that resistance.

So. A few (verifiable) facts to begin with.

ATT: the facts
The Arms Trade Treaty was passed by the UN General Assembly on April 2, 2013. At the moment, it is not in any way legally binding: it only enters into force 90 days after the 50th state ratifies it, and only two states have done so at the moment.

But even if it does enter law, regardless of whether or not the United States ratifies it, it will have no impact whatsoever on American domestic gun laws or gun owners – it is explicitly delimited to the international movement of weapons, and has no bearing whatsoever on domestic sale, possession or use of any type of weaponry.

The Treaty is extremely specific about this point: “For the purposes of this Treaty, the activities of the international trade comprise export, import, transit trans-shipment and brokering…”

Even if there were some secret component of the Treaty that allowed or compelled the seizure of American civilian-owned guns, there would be no domestic legal basis for such action.

The Constitution supersedes any international treaty, and with the Supreme Court having taken a fairly aggressive Second Amendment stance against gun control in recent years, any such treaty provision would be nullified by the courts almost immediately. So the effect of the Arms Trade Treaty on American civilian gun ownership overall will be: precisely nothing.

The purpose of myths
But for all their lack of connection to reality, these myths have a number of purposes.

They serve to keep potential donors to pro-gun causes engaged and angry.

They serve as an effective recruiting, promotional and fundraising tool for groups affiliated with gun manufacturers and lobbying groups.

And they feed into a broader narrative of nationalist paranoia about the loss of American sovereignty internationally and the loss of citizen sovereignty to an ever-growing national security state.

As the recent revelations about the NSA’s surveillance programmes have demonstrated, there is every reason to be vigilant about governmental overreach. But the Arms Trade Treaty is a completely separate issue, and wrongly – or cynically – placing it within the context of a debate about the role of the national security state serves only to cheapen the debate about both.

The ATT is not perfect, and its implementation will no doubt see weaknesses and loopholes emerge. But it is an important first step towards understanding, regulating and stopping the flow of weapons that feed into armed conflict and human rights violations across the world. But, for better or worse, it does not address the question of civilian, domestic gun ownership.

The merits of the ATT should by all means be debated vigorously – but that debate should be informed by the factual version of the treaty, not the mythical one.