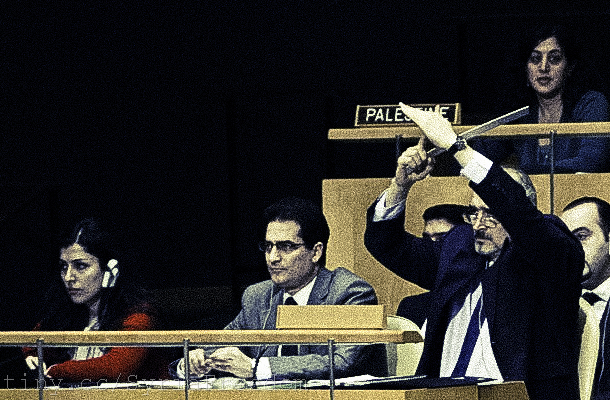 Syria’s free-fall due to UN free-for-all

The United Nations was shamed yesterday by its own investigator into human rights abuses in Syria, for failing to take decisive action to bring an end to the country’s conflict.

Brazilian diplomat Paulo Sérgio Pinheiro, who is the head of the Independent International Commission of Inquiry for Syria, began the meeting at the General Assembly with a passionate speech in which he described Syria as being in “free-fall” and urged the countries assembled in New York to, “hear the cry of the people. Stop the violence. Put an end to this carnage.”

The devastating impact of explosive weapons in Syria was at the heart of Pinheiro’s findings as he briefed the UN on the crisis: “A significant proportion of the deaths are the result of indiscriminate or disproportionate shelling”, he told the world’s diplomats. “Civilians have been killed by mortars landing in the streets. Others have been crushed by rubble after their homes were destroyed by barrel bombs. More recently civilians have been killed when surface-to-surface missiles destroyed not only their house but also their neighbourhoods.”

Explosive weapons with a wide-area impact have been a principal cause of civilian deaths and injuries in Syria. Recent analysis by AOAV of data gathered from Syria suggests that 40% of deaths in the conflict were caused by explosive weapons. Pinheiro warned that not only is shelling still a daily occurrence across the country, but that the Syrian government is using increasingly inaccurate and inappropriate weapons to attack populated areas.

In June 2012 the United Nations issued a statement which mapped out guidelines for a transition from the conflict.

The statement is based on a plan laid out by former UN Secretary-General Kofi Annan, who was leading international diplomatic efforts at the time, which centred on ending the use of heavy weapons in population centres. This was seen to be an urgent first step, and recognised the distinct humanitarian concerns associated with this particular pattern of violence.

A year later this document still marks the highpoint of any political solution to date.

A year later Pinheiro was forced to echo these earlier calls, demanding that “The government must cease using imprecise weaponry such as unguided missiles on civilian areas.”

A year later, the violence continues. A child was among 11 civilians who died today when three mortar rounds landed in the city of Homs.

As he closed his briefing, Pinheiro rounded on the Assembly itself, condemning it for its inability to build on its previous efforts. “That civilians should come under sustained unlawful attacks should shock your conscience, and spur you to action”, he said. “But it has not. As the conflict drags on, you and the world have become accustomed to levels of violence that were previously unthinkable… It is not enough to be appalled. There is an obligation to do what you must to bring this war to a close.”