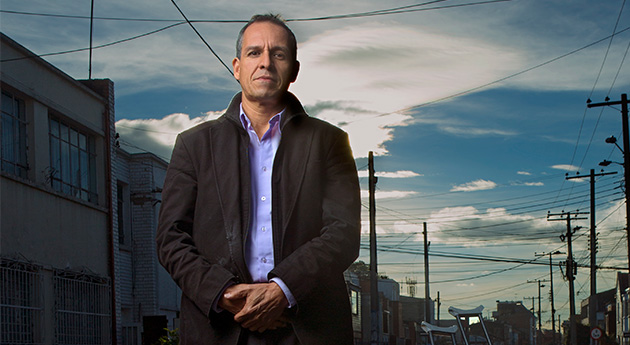 AOAV has met Álvaro Jiménez Millán of the Colombian Campaign against Landmines in Bogotá, to discuss the country’s ongoing violent conflict.

AOAV:  Can you describe Colombia’s biggest challenges in terms of armed violence?

Álvaro Jiménez Millán: Colombia has lived a long conflict. For almost sixty years we have had the presence of non-state armed groups, politically and militarily organised – the FARC and the ELN. The large Colombian conflict has also been transforming, in the same way that our social reality has been transformed, both economically but also in the regional context.

In the last ten years, the challenges didn’t seem be related to armed violence in the rural world. The epicentre has moved to urban areas such as Bogotá and Medellín, where the expressions of armed violence are distinct and have different actors, like drug traffickers and other actors that move in the shadow world of illegality.

Colombia has a serious problem with deaths as a result of conflict. We can indicate that the annual rate for homicides with firearms is approximately 2,000 people per year. The rate resulting from armed conflict of political nature lies between 30,000 to 40,000 people per year.

The rest of the people who die by the use of firearms are linked to other type of violence, such as drug trafficking, familiar problems, robbery. Therefore, the need to respond to armed violence in urban areas requires other strategies, other type of dynamics and other ways of looking at it.

In the rural world – the world of landmines – confrontation between armed forces and non-state armed groups like the FARC or ELN is relevant but Colombia is advancing towards a peace process that we hope to end with this cycle of armed violence, so we can attend other problems in the Colombian society.

At the moment armed violence the centre of attention of the majority of public administrators, including academic researches, is to better understand the construction of public policies but also to fight violence and violence dynamics.

Today, there are three elements that draw our attention to what is happening in big cities. One is the intemperate behaviour of the youth and the lower classes towards delinquency and possession of weapons.

Secondly, there is a growing armament in the civil population. Not only those that produce, but also the army who sells arms. We also have guns that are made in a non-industrial way, which are very easy to sell in the cities and social clusters.

The behaviour of very strong delinquent armed groups is growing in urban cities and educational centres. Among the young population, it is common to carry a gun and that increases the risks and also the need for a public policy.

Factors associated to the drug trafficking but also those associated to a culture of violence require a treatment for which the society and especially the state are not prepared. The state needs to be faster at producing policies and getting responses from the national police or the national agencies. The delinquency factor in the neighbourhoods, and in the urban world, moves like a mosquito. It spreads fast.

The distance between what happens and what is needed to respond is too slow. We need to produce efficient and effective policies to control this phenomenon.

Another factor is the social and economic instability. These cities have millions of inhabitants with little social mobility and without access to public services, education and economy. For this reason it will be very hard to keep illegality away. The illegality finds a place to grow within these populations.

AOAV: What role is the Campaña Colombiana Contra Minas playing within all this?

AJM: The campaign is an organisation, which historically had emphasis on anti-personnel landmines. But in the last two or three years the organisations has been also turning to other type of areas.

We are now working in armed violence reduction. We are working together with national and international networks that are working specifically on how to respond to the urban factors I previously presented.

But we also take an interest in other subjects such as killer robots, the nuclear armament and its risks. We are interested in educating the population affected by explosive weapons, a problem that we face in the majority of the Colombian urban centres. This is an essential subject: how to achieve the protection of civil populations in contexts where explosive weapons are being used?

This is not exclusive to Colombia, but also an issue in Venezuela, South Mexico, in São Paulo, in Rio de Janeiro, in Monterey or Guadalajara. These regions are facing the same phenomenon: drug trafficking and illegality.

It is interesting to see that each of them has its own characteristics and each actor moves in a different way, within different contexts. Thus, the strategies and policies need to be exchanged but they need to be revised according to the specificities.