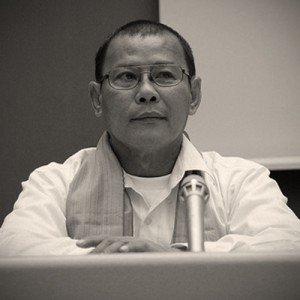 Tun Channareth, (known as Reth) became involved in the campaign to ban landmines after stepping on a mine as a resistance soldier near the Thai-Cambodian border in 1982, which resulted in the amputation of both of his legs. Together three other victims, Reth collected over one million signatures from Cambodians calling for a ban on landmines. This petition lead to the establishment of the Cambodian Campaign to Ban Landmines, a key member of the International Campaign to Ban Landmines. Reth collected the Nobel Peace Prize on behalf of the ICBL in 1997.