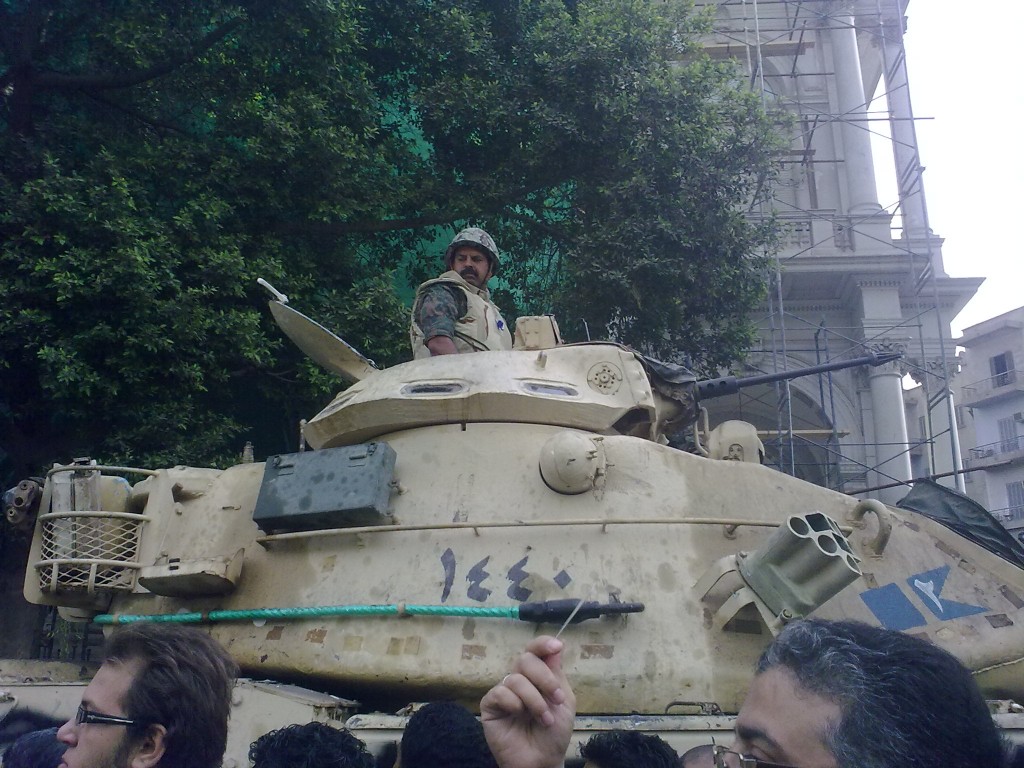 An Egyptian soldier sits in the cupola of an American-made M60 Patton tank.

As the situation in Egypt continues to spiral into violence, threats and recriminations, an increasing amount of attention has been focused on the American programme of military aid to Egypt. Given the size of the programme and the visibility of American-made military equipment on the streets of Cairo, this attention is entirely understandable. But the narrative that the continuation of American aid to Egypt is simply a result of indecisiveness in Washington obscures a complex balancing act with elements of geopolitics, national security and commercial interests on both sides.

As has been widely reported, Egypt is one of the world’s leading recipients of American aid. For FY2014, the Obama administration has requested $1.55 billion in total aid for Egypt, of which $1.3 billion will go to the military (though the final figure may be closer to $1.2 billion thanks to mandatory Pentagon budget cuts). The $1.3 billion figure has held steady since 1987, through five separate presidents of both parties, which makes aid to Egypt one of the most significant points of bipartisan agreement in American foreign policy.

Despite escalating calls for a suspension, limitation or cessation on military aid, the White House has thus far held its course: it has refused to call the ouster of President Mohamed Morsi a coup, which would trigger an automatic aid cutoff, and denied persistent rumours that it has secretly cut off aid to Egypt. Its only public actions thus far have been to delay the delivery of four new F-16 fighter jets and to cancel American participation in September’s planned biannual joint military exercise, Bright Star.

So what does American aid to the Egyptian military entail? In short, the answer is: virtually everything. It is impossible to observe the Egyptian military on the street of Cairo and miss the imprint of the United States. American-made vehicles dominate the garages of the Egyptian Army, including M1A1 Abrams and M60A3 Patton tanks, M113 armoured personnel carriers and Caterpillar armoured bulldozers. Those bulldozers were seen leading the demolition of protest camps in Cairo last week, while the tanks and APCs have been seen at strategic points throughout the city during the civil unrest. The Abrams tanks – the most powerful and sophisticated in Egypt’s army – are co-produced between the two countries, with component assembly in the US and final assembly taking place in Egypt. Over 1000 tanks have already been delivered and an additional 125 currently under contract.

The Egyptian Air Force also largely flies American combat planes, particularly the F-16 Falcon and AH-64 Apache attack helicopters. The Egyptian Navy sails US-made Oliver Hazard Perry and Knox-class frigates as their principal surface combatants. Unless the situation evolves into a full-blown civil war, the Navy and Air Force are largely irrelevant, but as ships and aircraft are amongst the largest, most expensive and most technologically sophisticated pieces of equipment operated by any military, their American provenance is worth noting. It is also worth mentioning that most of these systems represent, if not the absolute state of the art, than at least modern versions of systems in frontline use with the US military.

But just as a military is not simply the sum of its weapons systems, the American military aid programme does not simply supply Egypt with weapons and vehicles. It also consists of maintenance and training contracts to support the continued operations of the Egyptian military. Without such support, complex weapons systems become vastly less potent – by way of example, the Egyptian Air Force has the highest crash rate of any F-16 operator in the world, while its pilots fly for roughly ¼ the number of hours of their American counterparts. Absent the support, training and maintenance contracts, the Egyptian military’s combat capability would diminish even further.

That all said, the type of violence seen over the last week is not dependent upon the modernity or sophistication of the military’s systems: the Syrian and Libyan militaries were quantitatively and qualitatively far inferior to the Egyptian military and managed to inflict massive harm on civilian populations regardless. Around the margins, the better quality and maintenance of the Egyptian military’s equipment and the extent of its training might result in slightly fewer injuries or deaths amongst the security forces, but no more than that.

And there is little doubt that should the United States cease to sell Egypt weapons, another major exporter (most likely China or Russia) would step in and take up the mantle of supplying and supporting the military. Some capabilities, like advanced fighter pilot training, are more difficult to replicate without American aid, but they are also generally only relevant in a major conventional war. Without the backing of the US, the Egyptian military would become less powerful, but not by enough to alter its current tactics.

The more significant role of US military aid is as an indirect enabler of the military’s dominant place in the Egyptian economy. As far as suppression of street protests go, American weapons and their Chinese or Russian equivalents are functionally identical. But the fact that American aid is provided as a grant which covers an estimated 80% of Egypt’s military procurement budget frees up a significant amount of capital for the military to invest elsewhere. The Egyptian army’s investments and holdings go far beyond the defence sector – though exact information is difficult to come by, its holdings appear to reach into virtually every sector of the Egyptian economy. This enormous economic influence means that the Egyptian Army does not serve simply as an armed force guarding Egypt’s borders and securing its people. Instead, it is a political entity in its own right, and its actions and motivations must be interpreted through that lens.

This, fundamentally, is why American aid is so significant to Egypt. In the event that American aid was cut off, it is highly unlikely that Beijing or Moscow would be willing to offer the same favourable terms on price that Washington has. And absent the massive discount that the Egyptian Army gets on weapons procurement, the military’s ability to exercise influence over the civilian economy would surely suffer. Investment from other Egyptian allies such as Saudi Arabia might make up the shortfall, but spending Saudi money on Russian arms and Chinese training and maintenance is a distinctly suboptimal solution relative to the one-stop shop which is American aid.

Consider again that breakdown: $1.3 billion for military aid and $250 million for non-military economic aid. From that massive disparity, it is clear that the United States views the Egyptian military, rather than any civilian government, as its true partner. And it demonstrates why a termination or significant diminishment of aid is so unlikely.

Despite the emphasis on high-end battlefield equipment, the purpose of American aid is not to protect Egypt from external threat. The only imaginable conventional threat to Egypt is Israel, whose peace with Egypt is underwritten by the Camp David Accords and several decades of intensive American diplomacy. Moreover, while the Egyptian military is undoubtedly well-equipped and powerful by North African standards, it remains substantially outmatched by its nuclear-armed Israeli counterpart, which also receives considerably more (and more sophisticated) American armaments. The lavish provision of weaponry to Egypt serves more to assuage Egyptian fears of future Israeli aggression than to prepare Egypt for an actual inter-state conventional war. It is an odd version of deterrence theory, promoting stability by arming two potential enemies to the teeth.

There is also undoubtedly a commercial element. The structure of the American aid package means that Egypt can only spend its American aid allotment on American-made military hardware (non-US equipment must be bought from its own budget). This certainly has the effect of forcing the Egyptian military to maintain close political and economic links with the US in order to develop and maintain their proficiencies on complex weapons systems, but it also serves as a boon for the American defence companies who build and maintain those weapons. In a time of massive budget cuts for the American military, foreign contracts become more important for American military contractors which employ American workers and exercise notable influence on domestic American politics.

Counter-terrorism also plays a central role in American decision-making. There is no love lost between Egypt’s military and its Muslim Brotherhood; indeed, the latest violence seems to have been largely between those two factions. The Brotherhood (and hardline Islamic factions more generally) serves as a common enemy for the Egyptian military, the US and Israel.  In the years immediately after 9/11, the US used extraordinary rendition to bring terrorism suspects to Egypt, where they were subjected to torturous interrogation which would have been illegal by US law. This practice has ended by all accounts, but American security collaboration with the Egyptian intelligence and security services remains strong. Cutting off aid completely would almost certainly damage or destroy this relationship, which the American intelligence services would view as a major blow to their networks. Given the priority the US has given counter-terrorism in its foreign policy over the last decade, this is likely to be one of the most important determinative factors.

It seems unlikely that international condemnation will have much effect, either. Absent a formal international framework which forbids, restricts or penalises the transfer of weapons to states which engage in wholesale human rights violations, strategic and security calculations will continue to take precedence. The Arms Trade Treaty is a good first step towards such a framework, but as it has not yet entered into force, it will have no impact on the current situation in Egypt.

In other words, there is no single reason why the United States has been so unwilling to cut its links with Egypt. Instead, a complex web of political, geostrategic, economic and security considerations tie the United States and the Egyptian military together with strands composed of American weapons. This complexity, so notable in Egypt, is symptomatic of a broader condition of the international arms trade: finding justifications for arms sales is easy, but overcoming those justifications is much harder.