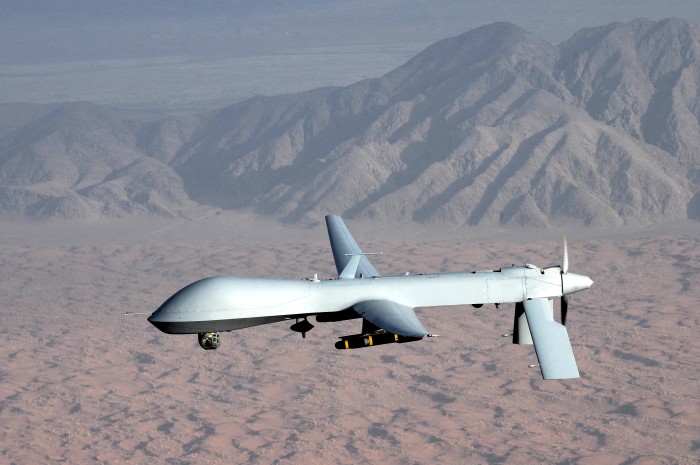 The CIA is reported to operate around 30 Reaper and Predator drones (pictured).

Yet a cloud of secrecy still surrounds the use of drone strikes by the US in Pakistan. Ten years on, neither the Pakistani nor the US government has fully explained the circumstances surrounding the decision to begin using drones in Pakistan. But details from other sources have started to emerge.

Reportedly a deal was proposed to the US. This deal would allow the US to start flying drones over tribal regions in Pakistan in order to target US enemies. In exchange the CIA agreed to kill Nek Mohammed.

The first drone attack by the CIA was a precursor for what would come over the next ten years, a decade in which 385 strikes would hit Pakistani soil. The strike targeted Mohammed while he was in a courtyard of a home in a village in South Waziristan. Multiple other individuals were in the courtyard with him. The strike, as well as killing its target, killed five others. Two of those killed were children, boys reportedly aged ten and 16. At the time, the Pakistani military claimed responsibility. But it is now clear that the attack was launched by the CIA.

The attacks on Pakistan continue today. After a respite of nearly six months, two drone attacks last week reportedly killed between 10 and 16 people after peace talks between the Pakistani government and the Pakistani Taliban collapsed.

“Never before in US history has such a lengthy and lethal military campaign been so inadequately described or justified by the government, which retains the fiction that these strikes are ‘covert’ and unworthy of public examination,” said Micah Zenko of the Council on Foreign Relations.

In 2013, President Obama assured that rules of engagement required “near certainty” that no civilians would be harmed in such attacks. Yet civilians continue to be among those killed and injured in drone strikes. Children are often among the victims.

This can be partially attributed to the US’ decision to keep the drones campaign in Pakistan under the control of the CIA. Due to the inherently secret nature of agency’s operations, official information on the number of casualties is classified.

However, in a recent analysis of 37 strikes, Ben Emmerson, UN Special Rapporteur on Human Rights and Counterterrorism, identified 30 incidents “in which there is a plausible indication that civilians were killed or sustained life-threatening injuries, or in which civilian lives were put at immediate risk”. Emmerson emphasises that this list is intended to be illustrative rather than exhaustive and that the actual number of inquiries needed could be much greater. Seven of these attacks occurred in Pakistan.

Emmerson calls upon the States responsible for incidents mentioned in his report to disclose the results of any fact-finding inquiries, but also to explain why no such inquiries have been made. States on whose territory strikes took place should also provide as much information as possible in connection with the attacks.

In line with the Emmerson’s call, Action on Armed Violence urges states to shed light on the practices surrounding the use of armed drones, both inside and outside of armed conflict. There is an urgent need for more transparency, in order to assess whether armed drones are currently being used in compliance with human rights and international humanitarian laws. Transparency needs to be increased not only in terms of casualty recording, but also with regards to the accuracy and precision of the technology in use.

The Bureau of Investigative Journalism records drone strikes and the casualties resulting from them. To read more about the first US strike in Pakistan, please read what the Bureau has to say here.