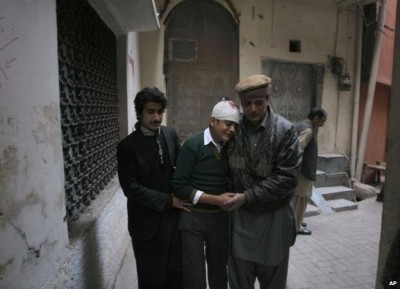 As Pakistan’s prime minister vows to rid his country of terrorism after a Taliban attack at a school in Peshawar killed 141 people, mostly children, Action on Armed Violence urges that this process needs to be accompanied by a similar commitment to helping the victims of terrorism.

Nawaz Sharif was joined by the Afghan president, Ashraf Ghani, today in his forthright condemnation.  Ghani said the “time has come” for his country to work with Pakistan to fight “extremism.”

AOAV, however, urges that this action should not just be militarily driven and that it needs to take into consideration treating and caring for the victims of terrorism in the region.

Among the 141 people who were killed when Taliban gunmen attacked a school in the Pakistani city of Peshawar were the school principal.  The families of the dead clearly need support – often psychological in nature, but financial too – at such a painful time.

In addition, over 100 people were injured in the attack.  This too should be carefully addressed with post-operative care and psychological support offered to those.

AOAV has worked and researched in Pakistan looking at the impact of terrorist violence there.  Our reports include an analysis of the devastating and under0-addressed impact of terrorism on victims’ long term health and mental outlook.