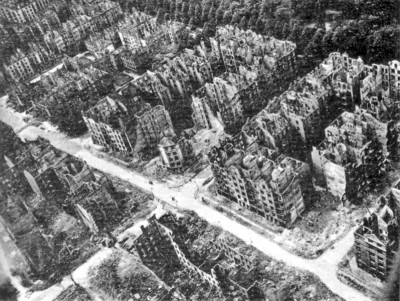 Much of Hamburg was destroyed in the bombing

Significance: 9,000 tons of bombs were dropped on the Germany port city of Hamburg in an operation which lasted eight days and seven nights. This weight of bombs had never been seen before in mainland Europe, and has never been seen since.

Who: The UK RAF and US air force.

The bombing of Hamburg by the UK RAF and the US air force devastated the city. 9,000 tons of bombs were dropped on the norther German city in Operation Gomorrah over eight days and seven nights. The operation used the biggest weight of bombs in relation to the duration of the operation which had ever been seen in mainland Europe, and has ever been seen since.

On 24 July 1943, 746 RAF planes dropped 2,300 tons of explosives and incendiary bombs on Hamburg. Over the next seven days, until 2 August 1943, the RAF and USAAF attacked the port city almost relentlessly. This assault was the heaviest in the history of aerial warfare, and was later called the Hiroshima of Germany by British officials.

The worst night was the 27 July, where the bombing created a firestorm, with winds of up to 240km/h, and temperatures of 800 degrees. A large number of those killed on that night were those in bomb shelters and cellars, since the firestorm consumed all of the oxygen and they suffocated. Thousands of factories, industrial buildings and civilian homes were destroyed in the campaign.

In 1946, Major Cortez F. Enloe, who worked on the US Strategic Bombing Survey, concluded that the aerial bombardment of Hamburg did more damage than the atomic bomb dropped on Nagasaki.

Similarly to the bombing of London by the German Luftwaffe, the RAF and USSAF hoped that the bombing of Hamburg might end support for the Nazi regime and lead to a quick conclusion to the war. Goebbels reportedly considered the need for Germany to call for peace after the bombardment, calling the raids ‘the greatest crisis of the war.’

In addition to being one of the most devastating air raids in European history, the Hamburg bombing allowed the RAF to debut two innovations in aerial bombardment. One of these was the HS2 radar scanning system. This allowed bomber crews to see the ground below in a TV-like image, theoretically making it easier to hit their targets.

However, the main innovation was the use of a new technological trick, called ‘window.’ Hamburg was well defended with anti-aircraft defences, including radars which could pick up enemy bombers up to 100 miles away. In order to minimise the impact of the air defences, RAF crew members would drop thin aluminium strips from their planes as they crossed German territory. These strips confused the defence radars, meaning that the German defensive guns did not work properly, allowing the bombers to maximise their devastation.

Reportedly, there were never any prosecutions at Nuremberg arising from the Luftwaffe’s aerial bombardment of Britain, because of the Allied forces own attacks on Hamburg and other German cities.