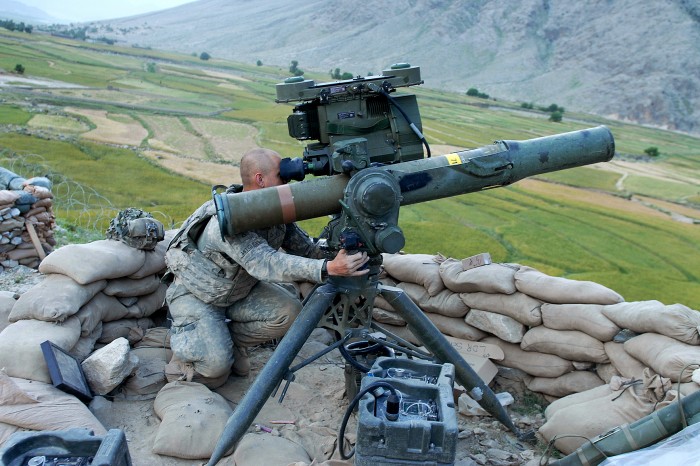 Videos have emerged on social media of Syrian rebels using American-made BGM-71 TOW anti-tank guided missiles against government targets. Some media outlets are reporting that these weapons have been supplied to the rebels directly by the American government, but for the moment the evidence for such claims is circumstantial at best.

Regardless of the provenance of these particular missiles, the US government is finalising a plan to increase military aid to rebel groups in Syria. Surface to air missiles have evidently been ruled out, but anti-tank weapons such as the TOW have not.

The emergence of yet another deadly explosive weapon on the Syrian battlefield should give pause to those advocating that plan. No weapon seems capable of breaking the stalemate in Syria – instead, every new explosive weapon introduced has merely intensified the bloodshed.

The TOW (Tube-launched, Optically-tracked, Wire-guided) missile is a weapon first fielded by the US military at the end of the Vietnam War. A versatile weapon meant to destroy tanks, armoured vehicles and fortified structures, the TOW can be fired from a tripod by infantry or launched from armoured vehicles or helicopters. After firing, the operator uses a small joystick to guide the munition to its target via a wire trailed by the missile, rendering it immune to most jamming techniques. The missile’s warhead is a powerful “shaped charge,” meaning that it is designed to project a blast in one direction to maximise its destructive potential against heavily shielded targets.

However, the high degree of training required to employ the weapon correctly also means that it is prone to inaccuracy in the hands of untrained combatants. Combined with the power of the warhead and the weapon’s range, this means that TOW missiles pose a significant danger to civilians if used in populated areas.

The TOW missile has been widely exported in the 40+ years it has been in service, including to a number of states peripherally involved in the Syrian conflict. Both Saudi Arabia and Turkey, which have been widely reported to be supplying arms to the rebels, deploy the weapon. In December 2013, Saudi Arabia signed an agreement to buy some 15,000 TOW missiles from Raytheon, the American manufacturer. In theory, foreign stocks of TOW missiles would require American approval to be sold or delivered to other users. In practice, given that these are portable weapons and that tens of thousands have been produced, diverting dozens or hundreds to the Syrian rebels without detection would be relatively easy.

And yet, dozens or hundreds of missiles could cause hundreds or thousands of civilian casualties.

As such, AOAV calls on all users of explosive weapons to refrain from using them in populated areas.

Furthermore, although the Arms Trade Treaty has not yet come into force, AOAV calls upon states to honour its spirit by refraining from selling or transferring arms into areas where they are likely to be used to violate international humanitarian law. The war in Syria has seen little restraint from any side. As such, it is inarguable that the use of TOW missiles will result in yet more civilian deaths and injuries.

That stark fact should give policymakers in the United States and elsewhere pause as they consider whether to supply explosive weapons to any party in Syria’s brutal war.