The use of explosive weapons in populated areas is one the leading cause of deaths and injuries to civilians during conflict.

Explosive weapons make situations intolerable for civilians. Homes are bombarded, schools and hospitals damaged and vital infrastructure destroyed. Beyond the immediate suffering, the long-term costs is often be severe.

In 2014 situations in Gaza, Syria and Ukraine show a repeated pattern of harm, as have the shelling and bombardment of populated areas in Côte d’Ivoire, Lebanon, Libya, Somalia, Sri Lanka, Sudan and elsewhere in recent years. 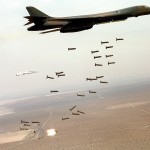 The international community must do all in its power to prevent such situations. To that end, the UN Secretary-General, has repeatedly raised this as a priority in his reports on the Protection of Civilians in Armed Conflict and has called on states to avoid the use in populated areas of explosive weapons with wide area effects.

As a humanitarian organisation working to strengthen the protection of civilians, Action on Armed Violence is at the forefront of seeking a political commitment from States to agree not to use explosive weapons with wide areas effects in populated zones.

Over 40 states have already spoken out about the humanitarian harm caused by the use of explosive weapons in populated areas. The time has come for states to make a clear collective commitment on this vital humanitarian question.

We urge States to support an international commitment to curb the use in populated areas of explosive weapons with wide area effects. Against the background of Gaza, Syria, Ukraine and other conflict situations, this should be a priority for State’s work both at the UN Security Council and the UN General Assembly.

For more on AOAV’s work on the harm caused by explosive weapons, please go here.