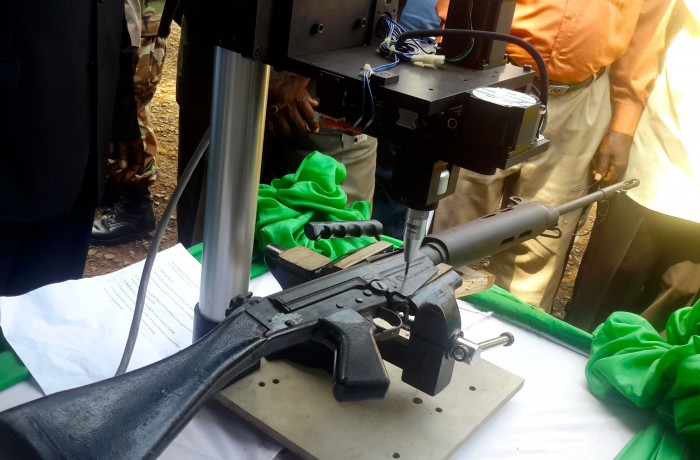 Following passage of the Arms and Ammunition Act in Sierra Leone, AOAV continues to provide support to local partners in its implementation.

Today is the second day of the BMS5 of the Programme of Action for Small Arms and Light Weapons. States are scheduled to continue discussing several points on the agenda, including stockpile management and the implementation of the international tracing instrument. These are some of the areas of the Programme of Action, which AOAV is helping governments to implement by developing small arms legislation.

AOAV works with governments in Sierra Leone and Liberia assisting them to fulfil their legal obligations under the ECOWAS Convention on Small Arms and Light Weapons, Their Ammunition and Other Related Materials. Both countries have statutory responsibility to formulate and implement policies that curtail proliferation, illicit manufacturing, trafficking, and distribution of SALW.

Following the adoption of the Act in August 2012, AOAV has been working with SLeNCSA to assist in implementation of the Act, as well as to support a nationwide information and sensitisation campaign, conducted jointly by SLeNCSA and SLANSA.

In Liberia, AOAV has been working with the Liberian National Commission on Small Arms (LiNCSA) to develop a draft National Firearms Control Act, to be presented to parliament in 2014. Topics that are under consideration to be incorporated into the Act include what types of weapons should be registered, who should be able to possess firearms, whether or not foreigners should be able to import and export arms, and the joint functions of LiNCSA and the Liberia National Police (LNP). The project brings together stakeholders from the Commission, parliament, government ministries, state security institutions, and civil society to work together to finalise the legislation.

In addition to providing technical advice, AOAV encourages partners to utilise open and transparent processes in engaging government, civil society and media representatives in order to generate greater consensus among decision makers and interest from the general public.

As states continue to discuss policies on how to control illicit trafficking of guns around the world, it is important to keep in mind the work that happens on the ground to make sure that the commitments made in the PoA are made a reality in people’s lives. Greater commitments to assist victims and survivors would make these commitments comprehensive and truly respect the dignity of the victim, as promised when they adopted the original Programme of Action.