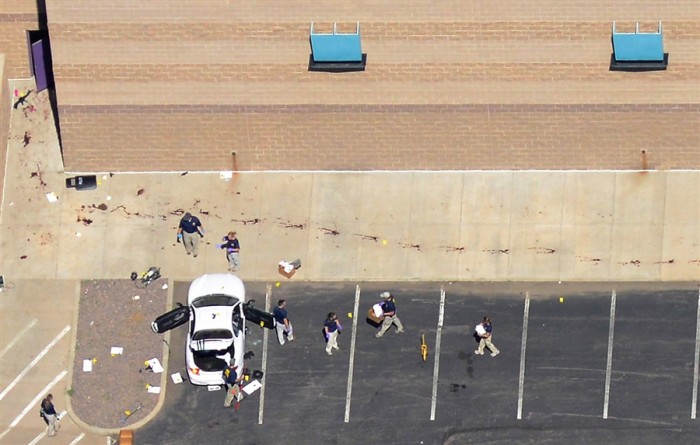 Number injured: 58 (most from gunshots, a few were injured by the crush inside the theatre).

Perpetrator: James Holmes, 24. In custody awaiting trial. Pleaded not guilty by reason of insanity to multiple counts of murder and attempted murder. Trial scheduled for October 2014.

Weapons: Remington 870 12-gauge shotgun, .40-caliber Glock handgun and .223 Smith & Wesson AR-15 assault rifle. The latter had a drum clip that could hold up to 100 rounds. The guns were purchased legally from local gun shops and Holmes had also lawfully bought more than 6,000 rounds of ammunition online. 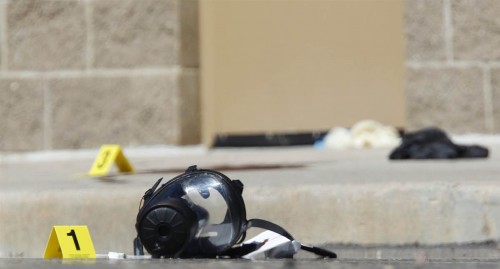 The shooter attended a midnight screening at a cinema in Aurora in July 2012. After the film had started, he exited the theatre and changed into full-body protective clothing and armed himself with the weapons stored in his car. Upon returning to the theatre, he threw gas canisters into the crowd and opened fire on the 400-strong audience. Shots passed through the walls and hit someone in the next theatre. 1400 people fled the scene and into the car parks. Some of the injured were hit by the AR-15 from 60 to 80 feet away. The shooter surrendered once police were able to reach him.

Colorado is a ‘shall-issue’ state for concealed carry. Colorado residents who apply for a permit must be at least 21 years old and must demonstrate competence with a firearm, either by passing a training class or by other means such as participation in organised shooting competitions. Open carry or concealed carry in a car is generally legal without a licence. However, local governments may prohibit open carry in premises that are directly under their jurisdiction (e.g police stations).

In March 2012, five months before the shooting, the Colorado Supreme Court refused to restrict access to private guns by striking down a University of Colorado regulation prohibiting concealed weapons on university campuses. The court ruled that students can carry concealed weapons on university campuses and clarified that the Concealed Carry Act allows an individuals with a permit to carry a concealed weapon ‘in all areas of the state’ with the exception of few premises (e.g. federal properties, courthouses, etc.).

A joint statement issued by the Violence Policy Center and dozens of other gun-control groups blamed an ‘out-of-control, militarized gun industry’ for the shooting. President Obama immediately expressed his grief for the victims and visited Aurora in the days after the tragedy. In reaction, the Brady Campaign to Prevent Gun Violence stated: “We don’t want sympathy. We want action.”

For gun-control advocates the top priorities were a ban on assault weapons and an expansion of required criminal background checks to include buyers at gun shows. The President, politically constrained in the last months of a re-election campaign, strongly supported enhanced background checks but remained hesitant to expressly support a ban on assault weapons. He stated that most gun owners would agree, “that AK-47s belong in the hands of soldiers, not in the hands of criminals.” Republicans warned that voters would make Democrats pay. They argued that restricting magazine sizes will drive jobs from the state, and won’t prevent criminals from purchasing larger magazines in other states.

In Colorado, police chiefs in urban areas were largely in favor of bills aimed at strengthening backgrounds checks and a ban on high capacity magazine rounds. However, in many rural areas the state sheriffs opposed background checks, arguing that such restrictions are unenforceable and violate the constitution.


Law and wider context after:

The state of Colorado passed a series of controls following the massacre. On 20 March 2013, Colorado’s Democratic Governor, John Hickenlooper, signed new gun control legislation – bills that failed to garner a single Republican vote – that require background checks for all private gun sales and a ban on large capacity magazines. Both bills took effect on 1 July 2013[1].

Pursuant to the law enforcing more stringent background checks, on and after 1 July 2013, any person who is not a licensed gun dealer and transfers or attempts to transfer possession of a firearm to a transferee is subject to a background check to be conducted of the prospective owner. In obtaining the background check, the dealer must take all measures that it would follow were it transferring the firearm in a retail transaction, including recording the transfer, retaining the records, and adhering to all state and federal laws.