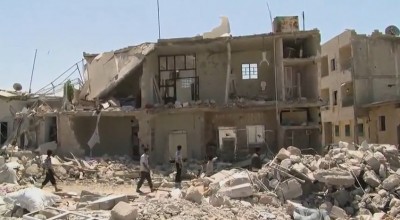 Significance: The biggest casualty count from a single air strike in AOAV’s explosive violence dataset, one of the deadliest attacks in the Syrian conflict.

The Syrian government has been carrying out air strikes against its civilian population since March 2012, when the first helicopter attack was documented in Azaz. Helicopter attacks have since become a regular occurrence in Syria, with the Syrian Air Force beginning to use jets to bombard towns and cities in July 2012. These airstrikes are entirely indiscriminate, and in some cases appear to be deliberate attacks against the civilian population. Air strikes have hit cities, towns, and neighbourhoods in rebel held areas of Syria, killing thousands of civilians. AOAV recorded over 3,000 civilian casualties from air strikes in Syria from August 2012 to December 2013.

The Syrian Air Force uses unguided munitions, which are extremely difficult to target, dropped by helicopters and jets. They have also used ‘barrel bombs,’ improvised devices which are made from objects like oil barrels containing a mixture of explosives and materials such as nails and pieces of metal. These objects are simply pushed out of the back of a helicopter, and cause a huge amount of civilian damage.

The damage which has been caused by aerial attacks in Syria is extensive. The 2012 August 15 attack on Azaz demonstrates the harm which can be caused by these strikes. Two air-dropped bombs killed 46 people and injured more than 200 in the attack which levelled an entire housing block. The casualty count is the highest count from a single air strike in AOAV’s explosive violence dataset, and remains one of the deadliest attacks of the Syrian conflict.

An area of 70 by 70 metres was destroyed. Azaz, close to the Turkish border, was a rebel stronghold, and thought to be quite stable before the August attack. It is thought that the attack on Azaz had the aim of destroying the support of the local population for the rebels. While two rebel buildings, the headquarters of the local Free Syrian Army brigade and a detention facility, were close to the attack, neither was damaged. The consequences of the air-dropped bombs was felt squarely by the civilian population.

The use of air strikes by the Syrian Air Force shows the blatant disregard by the Syrian government for international humanitarian law. It is a war crime to deliberately target civilians, or to carry out indiscriminate attacks. There is little possibility that the weapons being used by the Syrian government are capable of distinguishing between civilian and combatant, and growing evidence that they are deliberately targeting civilian areas. Attacks have hit bakeries, hospitals, and locations where no military target appears to be. The UN Security Council has condemned the use of indiscriminate weapons in populated areas, yet the Syrian Air Force continues to use barrel bombs and unguided munitions.

These weapons cause civilian death and destruction, and instil fear into the civilian population. Human Rights Watch, in a 2013 report, stated that aerial attacks have ‘sowed a path of destruction, fear, and displacement.’ Assad’s forces are acting with ‘callous disregard for civilian life,’ and are leaving a trail of destruction and terror.