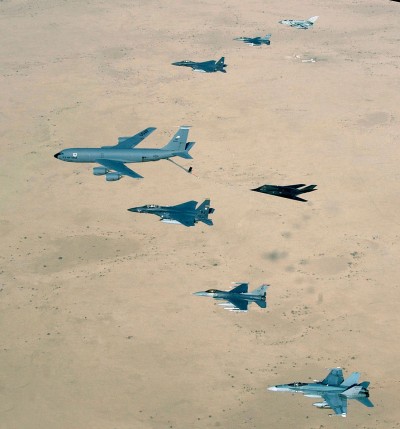 Impact: Iraq Body Count recorded 6,700 civilian deaths as a result of action taken by US led forces during the ‘invasion phase,’ including a shock-and-awe bombing campaign.

Weapons: Bombs dropped from B-2 bombers

Various justifications were made for the invasion of Iraq in 2003. The US claimed that Saddam Hussein possessed weapons of mass destruction and that there was a right to act in pre-emptory self-defence against Iraq. The UK used a slightly more sophisticated legal argument, using past UN Security Council resolutions as justification for their actions, namely that Resolution 1441 authorised their actions. Both of these arguments have subsequently been heavily criticised, with many holding the opinion that the invasion of Iraq was illegal.

The US-led forces began their action in Iraq with an aerial bombardment of Baghdad, starting on 19 March 2003. A 48-hour ultimatum had been given to the Iraqi regime on 17 March, stating they must leave Iraq by 19 March. When this ultimatum was not adhered to, a ‘decapitation’ attack was launched and Operation Iraqi Freedom began. The bombing of 19 and 20 March 2003 were a pre-cursor to the main bombing campaign, which began on 21 March. This phase of the bombing was known as the ‘shock and awe’ phase. Over 1700 air sorties were flown during this phase. The Americans claimed they were able to target the bombing in such a way as to ensure that the number of civilian casualties would be limited. However, Iraq Body Count, an organisation which tracks civilian casualties in Iraq, claims that 6,700 civilians were killed in the first three weeks of action in Iraq, during the ‘shock and awe’ phase. In the 21 days between 20 March and 9 April, when Baghdad was seized by Allied forces, 320 civilians were killed each day.

The bombardment of Baghdad allowed Coalition forces to push into Iraq, with US forces entering Iraq on 5 April 2003. Baghdad and the regime fell on 9 April 2003, and the US declared victory on 14 April of the same year. The bombardment of Iraq, that began Operation Iraqi Freedom, ultimately led to the downfall of Saddam Hussein and the end of the Ba’ath party in Iraq. However, thousands of civilians were killed during the aerial bombardment, and many areas of Baghdad were damaged.

More broadly, the Allied invasion of Iraq, and actions by various parties since, has created a country where civilians live daily with uncertainty and the threat of terrible violence. Parts of Iraq are in chaos, some of which is likely as a result of Allied actions in the country. A security vacuum was created with the pull-out of Allied forces, and the occupation of Iraq led to an increase in religious extremism, the effects of which are all to clear at the time of writing.